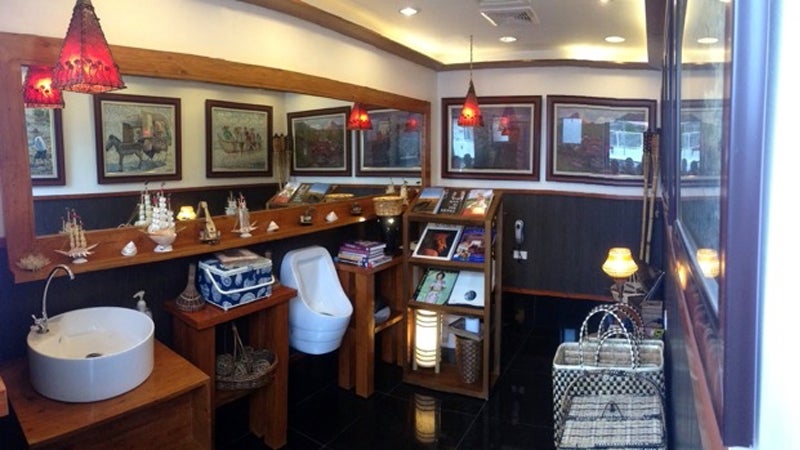 Men’s comfort room that was featured in a selfie video that went viral on social networking sites in November last year.

TAGBILARAN CITY, Philippines—Bohol’s latest tourist attraction is drawing visitors to a beeline outside what looks like ordinary public toilets in a gasoline station—until they enter and embrace their five-star hotel ambience.

Once the door to the individual cubicles opens at the Shell station on Clarin Street in Tagbilaran City, a pleasant waft of mint-like scent and cool air welcome users.

The surprise doesn’t end there for travelers seeking relief from bursting bladders when stopping by public washrooms.

The Clarin gas station is a rarity in a country flaunting tourism as an economic driver but bereft of such travel essentials as clean public lavatories with functional flushes.

Its 8-square-meter rest room is air conditioned and has a long horizontal clear mirror with a mahogany frame. Below the mirror are small boats embedded with shells and other preserved seashells.

Hanging on the walls are mahogany-framed paintings of Raul Agas, who is known for his brush strokes with ATM cards, and Antonio Ylanan, who won a painting contest sponsored by the Government Service Insurance System in 2008.

Both artists are Cebuano.

On the sides of the room are tables bearing baskets, vases, lampshades and other native products.

In a women’s cubicle, a shelf of magazines and books serves as a divider between toilet bowl and sink.

In a men’s cubicle, the bowl is behind the rack of publications, with a lampshade and a native basket at the bottom.

The urinal is between two side tables—one with books and the other with native décor items and next to the sink. It is just below the mirror so users can look at themselves in moments of relief.

Visitors can also surf the Internet because the place has an 8-mbps WiFi signal. A landline phone is mounted on the wall.

The public lavatory on Clarin, which answers with aplomb calls of nature, is but one of four facilities put up by owner Rex Carampatana.

The others are on Carlos P. Garcia Avenue, also in Bohol’s provincial capital; in Barangay (village) Lawaan in Talisay town; and in Barangay Tunghaan in Minglanilla town, in Cebu province.

Many people have asked Carampatana why he was investing so much in public toilets. His answer—he wanted to treat each of his customers as guests who deserve luxury service.

He said his clients enjoyed the “johns” because the facilities were not only clean but also looked like those found in luxury hotels.

Carampatana recalled that when he first opened the Talisay station in 2011, jeepney drivers left their slippers outside the room to avoid bringing in mud or dirt.

“We always remember the worst in public toilets. What we offer is a delightful, a memorable toilet experience,” Carampatana said.

The toilets are also part of a marketing strategy to provide customers a pleasant experience, he said.

“I really believe that it is an important point, as equally important as the engagements of our guests with our crew. Toilets to be acceptable need to be clean and functional,” he said.

What Filipinos can do

Carampatana, a civil engineer, said his comfort rooms had similar facilities and embellishments, usually native products, because he wanted to promote and showcase the beautiful things made by Filipinos.

In the case of the Clarin station, some of the tables, baskets and lamps are made in Bohol. Others came from Cebu.

All fuel stations have adjoining coffee shops and function rooms for meetings and family gatherings. Each is equipped with at least 40 closed-circuit television cameras, is open 24 hours, and has a shop that sells native bags and accessories, as well as delicacies.

Chona Bansag, the Clarin station supervisor, said most of the customers were so impressed by the facilities that “we often catch them taking a selfie.”

One of those who shot a selfie video was Jason Godfrey, host of AXN Asia, who posted it on his Facebook account.

A group of Korean tourists, accompanied by AirAsia’s marketing officer Melissa Gohing, dropped by the gas station on their third and last day in Bohol on Dec. 16 last year to check the comfort room that had gone viral online. They could not believe what they saw, Gohing said.

“We want to provide a wholesome experience to customers,” Carampatana said. “What I did was simply to add bells and whistles to make it even better. I want our guests to enjoy a different experience … a personal and highly memorable [experience].”

How about a shower that sings, too?