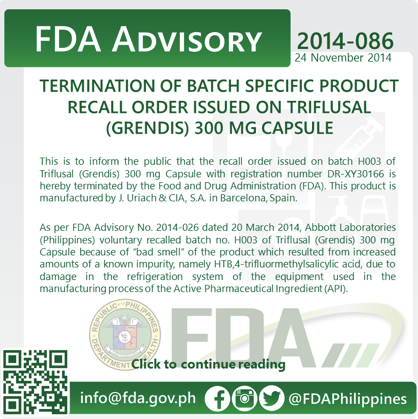 MANILA, Philippines–The Food and Drug Administration (FDA) has terminated a recall order it issued last year on a batch of antiplatelet drug manufactured in Spain, saying that the drug’s distributor in the Philippines has made “reasonable efforts” to pull out from the market and destroy all the affected products.

In an advisory, FDA officer in charge Nicolas Lutero III said the agency was satisfied with the actions taken by Abbott Laboratories (Philippines) to remove from the market Batch No. H003 of the Triflusal (Grendis) 300 mg capsule with registration number DR-XY30166.

Abbott voluntarily recalled that particular batch of the medicine in March 2014 after receiving a complaint from Malaysia that another batch of the product distributed there had a “bad smell.”

An investigation traced the bad smell to an increase in the impurity identified as HTB 4-trifluoromethylsalicylic acid, which was attributed to a damage in the refrigeration system of the equipment that was used to manufacture the drug’s active pharmaceutical ingredient.

Triflusal (Grendis), manufactured by J. Uriach and CIA, S.A. in Barcelona, Spain, is an antiplatelet drug indicated for secondary prevention following a first coronary or cerebrovascular ischemic event of myocardial infarction, stable and unstable angina and nonhemorrhagic stroke, among other conditions.

“After careful evaluation of the submitted documents, the FDA has determined that reasonable efforts had been made by the marketing authorization holder, Abbott Laboratories (Philippines) to recall and properly destroy the impacted product batch in accordance with the guidelines to be observed on the implementation of product recall system,” Lutero said in the advisory.

But he said the termination of the recall order on the particular drug will not preclude the FDA from issuing subsequent orders it may deem necessary and appropriate should there be findings of any violation of existing laws and rules and regulations.

All field FDA officers were also ordered to monitor the affected batch of the product and seize them if found in the market.