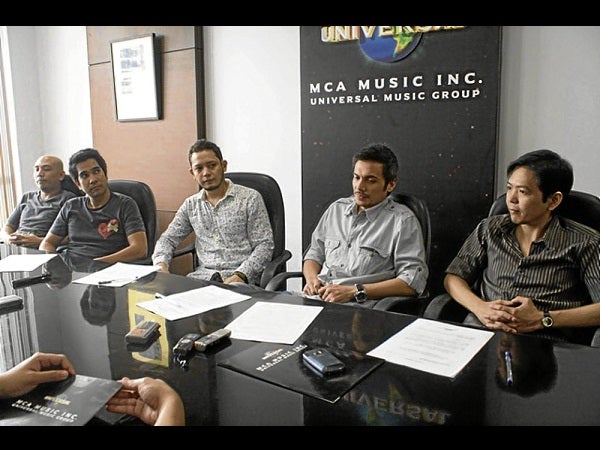 The Bamboo boys are back–minus Bamboo If you miss Bamboo—the band, not their lead vocalist—then this piece of news might excite you: ex-Bamboo members Nathan Azarcon, Vic Mercado, and Ira Cruz are back together. Joining the three are Radioactive Sago Project’s Junji Lerma on guitars, and Jay Orduña on keyboard.

Naturally, with lead vocalist Bamboo out of the picture, the band is no longer called Bamboo. The new name is Hijo, which can mean son, little boy, or little child.

Asked if the band’s sound is any different from that of Bamboo, Nathan surprisingly says that while it is different, it’s also the same. He explains, “Fresh, new, parang di mo pa narinig. You’ll either hate it or love it.”

The guys describe their music as “kung fu rock,” which is rock, jazz, and punk mixed together with pop sensibilities. With two new people on board, the band is sure to offer a new sound. For example, the fact that the band now has a keyboardist and that there are now two guitarists is sure to add a new dimension to their sound.

So how does this new set-up work, musically speaking? “We just have to figure out sonically kung saan kami,” explains Ira about how he plays, now that he’s not the only guitarist. “Kailangan lang naming pag-usapan.”

Junji, the other guitarist, agrees. “Hindi nabubutas yung tunog,” he says of when the two of them play the guitar. He also compliments Ira, noting that they work well together. “He’s an intelligent musician.” The biggest and most exciting change of all is how Nathan is now the band’s lead vocalist, while still playing the bass guitar, of course. He shares that the band did try to look for a new vocalist but most of the people who auditioned had a bad aura; they seemed “mayabang and ma-ere,” according to Nathan.

The other band members suggested he grab the microphone, an idea that didn’t sit well with him and Ira at first. After giving it a try, however, everyone eventually got convinced that he should be behind the mic.

A lot of people, including Nathan, thought that the most challenging part of this change was singing and playing the bass at the same time. As it turned out, it was no problem at all. The challenge for Nathan was more of reconditioning his singing voice and “making my lungs bigger.”

Things are definitely looking good for this new band. For starters, they just signed a record deal with MCA Music, which is an affiliate of the Universal Music Group. “We are so glad we found a label that shares the same vision we have,” says Nathan. The guys are also almost done with their debut album.

Actually, we don’t mind the drama, as long as we get excellent music. But something tells us that with the new band of these ex-Bamboo members, we’ll fortunately get less drama and more excellent music.