What Francis ate: How sweet it is | Lifestyle.INQ ❮ ❯ 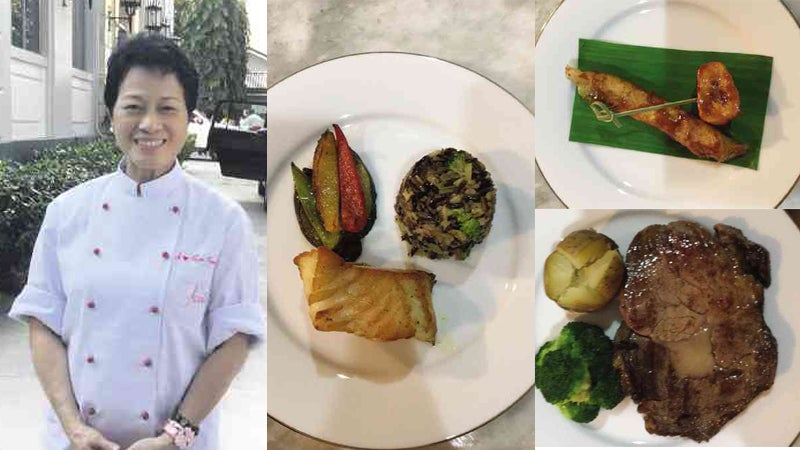 What Francis ate: How sweet it is

MANILA, Philippines–Pope Francis can eat anything, especially beef, and loves ice cream and sweets, especially dulce de leche, but nothing in excess.

Such was the invaluable discovery Chef Jessie Sincioco has made the past three days as she was given the enviable task of preparing the meals of the visiting Pontiff, with the help of the Apostolic Nunciature staff. To Sincioco—and perhaps to any culinary professional—to cook for the Pope is the ultimate honor of her 23-year culinary career.

“When I was told that I would be preparing the Pope’s meals, I went down on my knees, in joy and gratefulness for this biggest blessing,” she said in an exclusive interview with the Inquirer.

Friends and dining clients who are familiar with Sincioco and her restaurant, Chef Jessie, at One Rockwell, know that she is a devout Catholic whose go-to saint is St. Joseph.

“And Mama Mary, of course,” she said, “and I was so happy that at the meeting with families at SM [Mall of Asia] Arena, Pope Francis had St. Joseph.”

She had been chosen by the papal visit committee led by the Apostolic Nuncio Giuseppe Pinto and the archbishop of Manila, Luis Antonio Cardinal Tagle. Her cooking was apparently known to Pinto, who would dine at Chef Jessie.

The Filipino’s outpouring of love for the visiting Pope Francis was incredible, but even more touching was the response of the beloved Church leader to the suffering and immense faith of his flock. He seemed to have appreciated their every gesture of welcome and plea for blessing.

Last Saturday afternoon, at the Apostolic Nunciature, Sincioco had the priceless experience of seeing Pope Francis step out of the car and greeting him, “Welcome back from Tacloban, Your Holiness.” Although he looked tired, the Pontiff gave an affable smile, as he always did in his home during his four-day sojourn in Manila.

Then Sincioco set out to prepare in the kitchen the Pope’s dinner of grilled chicken with chimichurri sauce, the popular sauce that is a staple of Argentinean dining, made of parsley, oregano, vinegar, red pepper. The Pontiff is Argentine. It was capped with Italian ice cream with turon and banana cue.

The day she was told last September that she had been chosen to be the Pope’s chef, to be assisted by the nunciature’s kitchen staff, Sincioco went online to research the Pontiff’s dining preferences and bought all the books about Francis in the bookstores.

“It was from these readings that I learned that he likes desserts,” Sincioco said. There couldn’t have been a better fit for the job—Sincioco is known for her desserts, from her years at Le Soufflé when she worked as the pastry chef of the iconic restaurant and became known for her soufflés (cheese, chocolate, among others) to her present stint as entrepreneur-chef of Chef Jessie and the revolving restaurant in Eastwood. Aside from the soufflés, loyal diners at Chef Jessie come for her pudding and crepes.

The first meal she prepared for the Pope was last Friday—saffron risotto for starters, pan-fried sea bass (barramundi or apahap) with potatoes and vegetables, and dessert of flambé mango with mantecado ice cream.

Francis finished it off, especially the dessert, and when Sincioco asked Pinto how he found it, the papal nuncio said, “Double excellent.”

This confirmed what Sincioco had read—the well-loved Pope has a sweet tooth. He loves ice cream, crepes and dulce de leche, be it in cake or ice cream and other pastries.

For breakfast, which the nunciature kitchen staff prepared, the Pope had a light simple selection of cold cuts, cheeses, jams and yogurt. Sincioco would add her trademark ciabatta, another favorite at Chef Jessie.

The Pope had Italian wine with his main course.

On Sunday, for his last meals in the Philippines (he would leave early Monday morning for Rome), Sincioco made sure to prepare the dishes that Chef Jessie has become known for. For lunch, she prepared spaghetti carbonara, roast beef and chocolate soufflé.

For dinner, she made him a special menu of consommé of asparagus and herb, grilled sea bass with a sauce of red tomato and artichoke heart, wild rice vegetable risotto (another favorite at Chef Jessie). For dessert, it was dulce de leche sponge cake.

Sincioco said the nunciature gave clear instructions not to prepare so many dishes for each meal because the nuncio would not want anything excessive or anything to go to waste.

Also, given the Pope’s hectic schedule and the long-haul trips, the nunciature didn’t want any cuisine that would be adventurous or anything that would tax or upset the Pontiff’s stomach. Nothing complicated, in short.

“The nunciature is being very careful about the Pope’s digestive health,” she said.

Therefore, although she would have wanted to introduce the Pope to Filipino fare such as tinola, sinigang or bistek Tagalog, she decided not to, for these might be new to the papal taste—and digestive system.

Francis did not dine alone. He took his meals with Pinto and the papal staff of 12.

Although she was holed up in the kitchen at the nunciature, Sincioco saw the Pope up close. “He was so approachable, [always greeting people] and waving,” Sincioco recalled her memorable moments in the papal nuncio’s house.

Asked what memento from this stint she would take, she said, “I would like to ask His Holiness to sign the menu.”

That would indeed be a priceless treasure for this chef who strayed into the culinary arts, from banking and finance.

Pope to eat ‘paksiw,’ other Filipino food during lunch in Leyte

Who will join Pope Francis for lunch in Leyte?

In Leyte, Pope’s lunch may include local delicacies