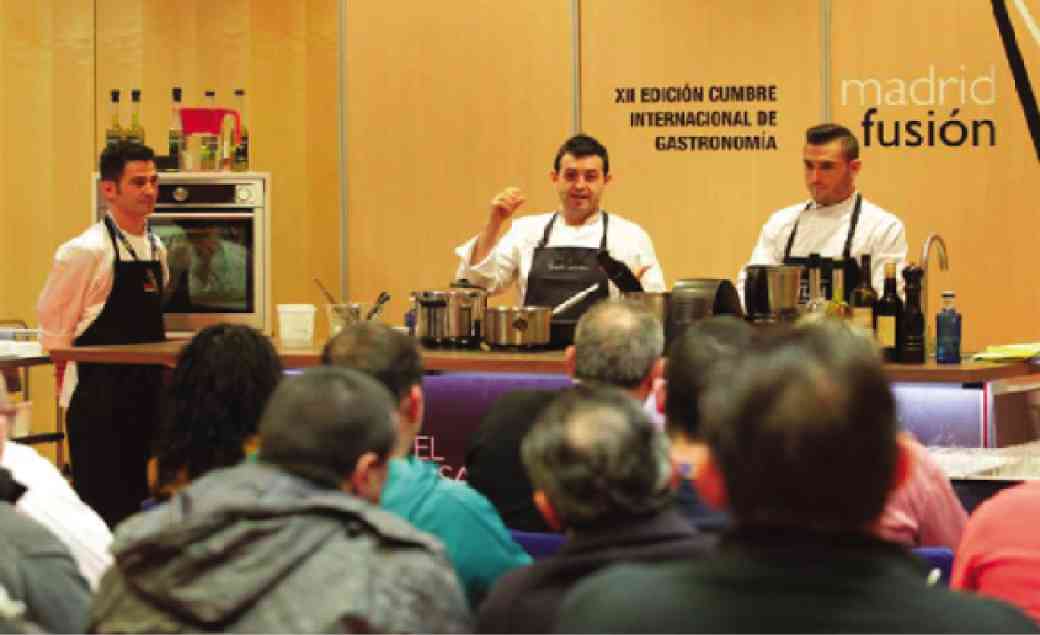 MADRID Fusion allows chefs to learn tricks of the trade from the industry’s best.

Just how did Madrid Fusion end up on our laps? And what exactly will happen during the three-day festivity?

Having attended four separate occasions of Madrid Fusion in Spain, renowned restaurateur Margarita Forés thought, why not feature the Philippines the way Korea and Peru had been put in the spotlight in the past years?

In April 2013, she gave a proposal to Tourism Secretary Ramon Jimenez Jr. to explore that possibility. It felt like a long shot, but plausible nonetheless.

To her surprise, Jimenez took to the idea, and even raised the stakes. Instead of simply participating and playing a bit role in Madrid Fusion, he suggested to stage the whole event in Manila.

His team proceeded to study that possibility, and a year and two months after, contracts were signed.

From then on, the Tourism department and Forés’ team have been working hard to come up with what is projected to be the biggest event in contemporary local culinary history—the Madrid Fusion Manila 2015.

Madrid Fusion is a gathering of the most prestigious and innovative chefs from all over. Held annually since it began in 2003, it has brought countries together as well as become an

avenue to present the future of food.

And as part of DOT’s “Visit the Philippines Year 2015” campaign and to commemorate and celebrate over 300 years of shared history between Spain and our country, Madrid Fusion Manila couldn’t have come at a more perfect time.

“For many years, Philippine food has remained one of our best-kept secrets,” says DOT director Verna Buensuceso, who’s supervising the operations of the event.

“Many foreign tour operators we have hosted in the country have been pleasantly surprised to discover the richness of our culinary culture and the variety of food choices around. We have been looking for ways to impart the message that the food scene in Manila rocks. And then, Madrid Fusion was brought to our attention.”

Think of it as a healthy congregation; a meeting of minds, cultures and flavors; a place where people share their food knowledge and pick up new cooking information and inspiration.

Three major activities will happen simultaneously during the event.

The first is the International Gastronomy Congress, where Spanish and Filipino chefs have been invited to take the stage and give 30-minute presentations on a food subject they feel passionate about.

Some celebrity chefs gracing this occasion are Paco Roncero who will talk about olive oil, Ramon Freixa who will discuss the art of tapas, Mario Sandoval on the science of roasting, and Francis Paniego who will present 21st-century Spanish marinades.

Our very own chefs will play a part as well. Among them are Fernando Aracama who will introduce guests to sour fruits, Rob Pengson on new Filipiniana cuisine, J Gamboa on nose-to-tail eating, and Forés herself, on things that give life like fish eggs and crab roe.

There will also be a trade exhibit to promote the unique and bountiful produce of Spain and the Philippines.

Berna Romulo-Puyat of the Department of Agriculture, with the help of Ritual’s Bea Misa-Crisostomo and Paula Zayco-Aberasturi of Down to Earth, is working on a beautiful display of some of our most distinguished ingredients.

“We will be showcasing different kinds of banana and mango, cacao and coconuts along with their by-products, tuna, coffee, heirloom rice, artisanal salts, pomelo, calamansi, dalandan, mangosteen, pili nuts and honey. Basically, agricultural produce that we can export and those that we can only find in the Philippines,” she said.

From the Spanish side, a wide array of wines, hams, cheeses, olive oils and spices will be presented.

Simultaneous with the congress and exhibit at the SMX Convention Center are many other activities in the metro.

Dubbed Flavors of the Philippines Festival, this third and final component will have celebrity chefs host special one-night dinners in select restaurants, gastronomy-related cultural events like film showings, and food tours for guests who like to eat and learn more about the city and our cuisine.

From April 23 to 25, all eyes will be on our country as Madrid Fusion Manila will finally put our cuisine at the forefront.

For interested parties, visit www.madridfusionmanila.com to register and avail of the early-bird discount for tickets. It will include access to the three-day conference, regional lunches and meals, use of simultaneous translation device inside the venue, access to trade exhibition, badge, delegate kit and a certificate of attendance.