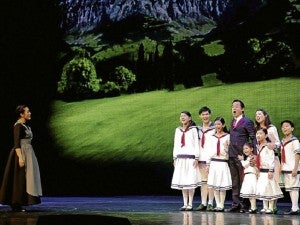 Both will bring to life the part of the earnest and determined postulant nun assigned as a governess of the untamed seven children of stern widower and Navy Captain Georg von Trapp.  Laughter and love blossoms when Maria wins the children (and their father) over with music.

Both have played other “Marias” prior to this production.

Villonco has played lead roles for Repertory Philippines, Dulaang UP and, recently, for Tanghalang Pilipino’s “Noli Me Tangere” as Maria Clara.

Ampil has performed internationally, starting her career as Kim in the West End staging of Miss Saigon and recently as Maria in Stages Productions’ “West Side Story.”

A former VJ for music channel Myx and theater actor (Bankard’s “Diary of Anne Frank” and Actors’ Actors’ “Mother Tongue”), Feist returns to Manila after having been based in Australia the past few years as lead vocal for Soul Motel band.

Joven has played Thuy in the German staging of Miss Saigon and has credits on Broadway and off-Broadway.  Locally, he’s played lead roles for TP such as Orly in “Himala the musical,” and Crisostomo Ibarra in “Noli Me Tangere.”

With music by Richard Rodgers and lyrics by Oscar Hammerstein II, audiences may be more familiar with the 1965 film version starring Julie Andrews (“Princess Diaries”) and Christopher Plummer (Pixar’s “Up,” “Inglourious Basterds”), though the musical premiered on Broadway six years prior.  The musical is based on Maria Augusta von Trapp’s memoir “The Story of the Trapp Family Singers.”

Since the film’s release, songs that were added for the movie, such as “I Have Confidence” and “Something Good,” are usually included in revivals.  Previous Manila stagings have been done by Company of Players (1997) and Repertory Philippines (2006).

This production will be staged at RWM’s 1,500-seater Newport Performing Arts Theater.

Set design is by Mio Infante with video design by television commercial director Paul Soriano.  Video backdrops will be shown via the theater’s 30 m x 8 m LED (light emitting diode) screen, touted as the largest in Southeast Asia.  10 ft x 14 ft LED walls will also be placed at each end of the stage. The screens allows for showing of 3D sceneries.

Since the theater’s inauguration last year, it has hosted concerts of local and foreign artists (Lani Misalucha, Lea Salonga and David Pomeranz, Zsa Zsa Padilla and Basil Valdez, to name a few), beauty pageants, corporate events, and a Vegas-type musical spectacle show “Kaos.”  Concerts will still be staged at the theater on days when “Sound of Music” is not running.

RWM members using their Visa Platinum and Gold credit cards to purchase tickets can avail of up to 25% discount, applied to a maximum of four tickets per card per show, when transacted at RWM Box Office and Ticketworld outlets. RWM members can also use points earned in their membership cards towards purchase of tickets. Membership to RWM is free.