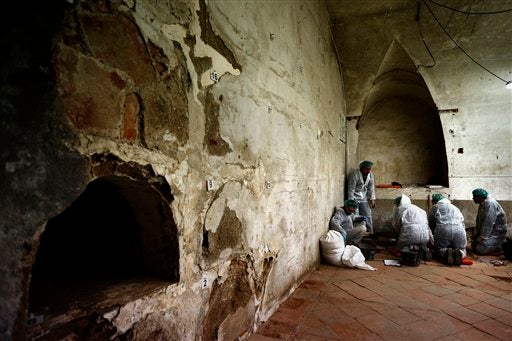 A team of archaeologists and anthropologists take notes after starting the excavation work after identifying three unrecorded and unidentified graves in the chapel’s crypt of the closed order Convent of the Barefoot Trinitarians in Madrid's historic Barrio de las Letras, or Literary Quarter, Spain, Saturday, Jan. 24, 2015. AP

MADRID — Experts searching for the remains of Miguel de Cervantes have started what they hope will be the final phase of their nine-month quest to solve the mystery of where the great Spanish writer was laid to rest.

The author of “Don Quixote” was buried in 1616 at the Convent of the Barefoot Trinitarians in Madrid’s historic Barrio de las Letras, or Literary Quarter, but the exact whereabouts of his grave within the tiny convent chapel are unknown.

A team of archaeologists and anthropologists decided to start excavations at the site after identifying what they believe are three unrecorded and unidentified graves in the chapel’s crypt. Those bones were being exhumed and analyzed.

Cervantes is a towering figure in Spanish culture. His novel — “The Adventures of the Ingenious Nobleman Don Quixote of La Mancha” — changed Spanish literature. His wife, Catalina Salazar, was also buried at the convent, although the location her grave also remains a mystery.

The chapel crypt on Saturday had the air of a modern forensic laboratory transported to a medieval location, with more than 20 experts at work with white lights under a vaulted ceiling.

By midmorning, some experts at the underground site were examining bones that had been extracted from a niche and carefully laid out on a table. Another group of five white-clad experts painstakingly opened a grave beneath the whitewashed crypt’s old terracotta tiled floor.

Close to the crypt’s entrance, two scientists studied images obtained from within another wall niche by using an endoscope camera carefully inserted through a tiny hole.

Elsewhere, a team assembled a geo-radar device mounted on wheels to probe other possible underground locations.

“Were we to find remains that fulfill the characteristics we are looking for, we could possibly pass to a next stage. That would be to compare DNA similarities with his sister, but that is a very complex step,” said Francisco Etxeberria, a forensic medicine specialist from the University of the Basque Country.

The author’s sister, Luisa de Cervantes, was buried in a convent in Alcala de Henares, 30 kilometers (19 miles) east of Madrid, where she was interred in 1623.

Almudena Garcia Rubio, who is leading the Cervantes project, said Friday if they don’t find Cervantes’ remains in the places so far identified, there are four other possible locations at the convent they could try next.

Evidence marking the location of Cervantes’ grave is believed to have been lost during an enlargement of the church after his death. Etxeberria said, back in Cervantes’ day, graves were not often marked with long-lasting memorials such as carved headstones.

Before settling down to work, the forensic team had to shift piles of old books and bookcases from the space, which had previously been rented out to a publishing company.

My Top 101 Books (not necessarily in order)