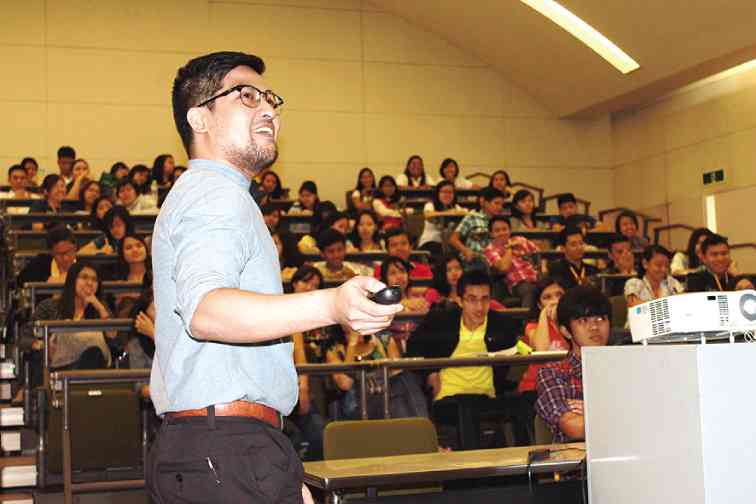 Literature and pop culture teacher at University of Santo Tomas; author of “Paubaya” and the best-selling “iStatus Nation”

I have been immersing myself in a lot of Bill Bryson humorous narratives, particularly “A Walk in the Woods,” “Mother Tongue” and “Neither Here Nor There,” where I derive some of the comic techniques I will employ in my current projects such as “#Biyahero,” a humorous travelogue that provides a popular take on not-so popular local destinations; and “Titser Pangkalawakan,” my idiosyncratic take on economics, education, politics, and just about every issue that matters to ordinary social-networking Juans.

Since I am working for my dissertation on a biography of poet Teo T. Antonio, his poetry collections, “Taga sa Bato” and “Sa Aking Soledad,” are a constant companion, as well as “Jose Corazon de Jesus: Mga Piling Tula,” edited by National Artist Virgilio S. Almario.

To break the monotony of exchanges between my Brysons and my academic references, there is “The Ig Nobel Prizes: A Collection of the World’s Unlikeliest Research” by Marc Abrahams, a hilarious book on the serious world of scientific and academic research.

Professor of food science and technology, University of the Philippines Diliman

The academic calendar shift robbed me of the precious Christmas break I usually allot for reading. Now, instead of digging into the pages of my favorite novels, I check technical reports and exams. But in between markings, I try reading books such as those of Kate Mosse (not the model!). Far from the microbiology and molecular-biology books and journal articles I read on a regular day, the books I read for leisure are mostly historical fiction. Mosse’s Languedoc Series, which includes “Labyrinth,” “Sepulchre” and “Citadel,” infuses multiple plots and superimposes modern-day and fictional historical characters.

These novels provide readers vivid pictures of significant historical events, particularly those that happened in France where the author lives. “Labyrinth” is set in the 13th-century Carcassonne at the time when the Catholic Church launched crusades against Cathars. “Sepulchre” is set in the 19th century and tackles the interest in mysticism and the supernatural. I am still reading the last novel of the trilogy, “Citadel,” which is set in World War II and 4th-century Languedoc.

I was never a fan of history as I found memorization of dates, names of places, and people difficult. However, with books such as these, I have realized that studying the past can be fun if it will be presented in a form such as these novels. Of course, the challenge will be making students recognize which is fiction and which events actually happened!

The “books” I am reading are the booklets of Bikol corridos, novels, prognosticos (book of dreams and interpretations), and the novenas published by the Cecilio Press since the 1950s. As deputy of the Ateneo de Naga University Press, I am delighted that it is part of my tasks to recollect, select and study these materials for a special series of Bikol Classics that we will launch this year in celebration of our university’s 75th founding anniversary.

My love affair with these books started when my mother gave me a novena to Santa Rita de Cascia, whose feast day falls on her birthday. It was her parting gift before she traveled to Qatar to work as a domestic helper. I remember my young mother telling me to read and read and read so that I would learn how to write to her.

After reading the novena to Santa Rita, I would look forward to going to the church in Iriga, and after the Mass, I would immediately rush to the stall and ask my father to buy me at least one of the available titles. Until now these novenas are still being at P5-P10.

For some strange reason, I never had a penchant for glossy pages and hardbound books (usually imported ones). Instead, I marveled at the small size and the fragility of these booklets published by Cecilio Press. As a young boy, I grew up thinking that these booklets with oddly printed letters contained spells that could ward off any kind of evil.

I also recall how my maternal grandmother and her peers in Nabua, together with the local musicians, would perform poetry and prayers in Bikol, Spanish and Latin, found in these booklets during the Aurora, a religious procession, which usually begins at sunset and ends at daybreak.

My elders made us believe that performing the Aurora prevents epidemic, typhoons and volcanic eruptions. Later on I discovered that it was the elders’ way of soliciting funds to finance the beautification project of the village chapel and cover the Mass stipends for priests.

As a faculty member of Ateneo de Naga, I have been doing research on these kinds of reading materials. The most interesting texts I have come across in my wanderings are the works of Luis Dato and his trilingual dictionaries; Mariano Nicomedes’ “Dotoc asin Pasion sa Mahal na Santa Cruz,” a religious drama that reenacts the search for the Holy Cross; Antonio Salazar’s “1001 Hapot asin Simbag” (1001 Questions and Answers), which I am annotating together with anthropologist and critic Tito Genova Valiente; Alfredo Gueta, who wrote several works like “An Testamento can Tolong Hade” (The Gospel according to the Three Kings), which are intended as devotional materials for the paratapat, pollador and paratawag (folk healers and bettors).

Of these Bikol writers, Rosaulio Imperial Sr., who was elected as chief local executive of Naga City after the war, was the most prolific. He should be noted for his Bikol translations of Western literary classics, which include Gustav Flaubert’s “Madame Bovary” and Leo Tolstoy’s “War and Peace” in corrido form. He also wrote a corrido version of Jose Rizal’s “Noli Me Tangere” and translated Francisco Balagtas’ “Florante at Laura” to Bikol.

The local government of Naga City has already pledged its support to advance our literary studies on Rosaulio Imperial Sr. and his contributions to Bikol’s cultural history.