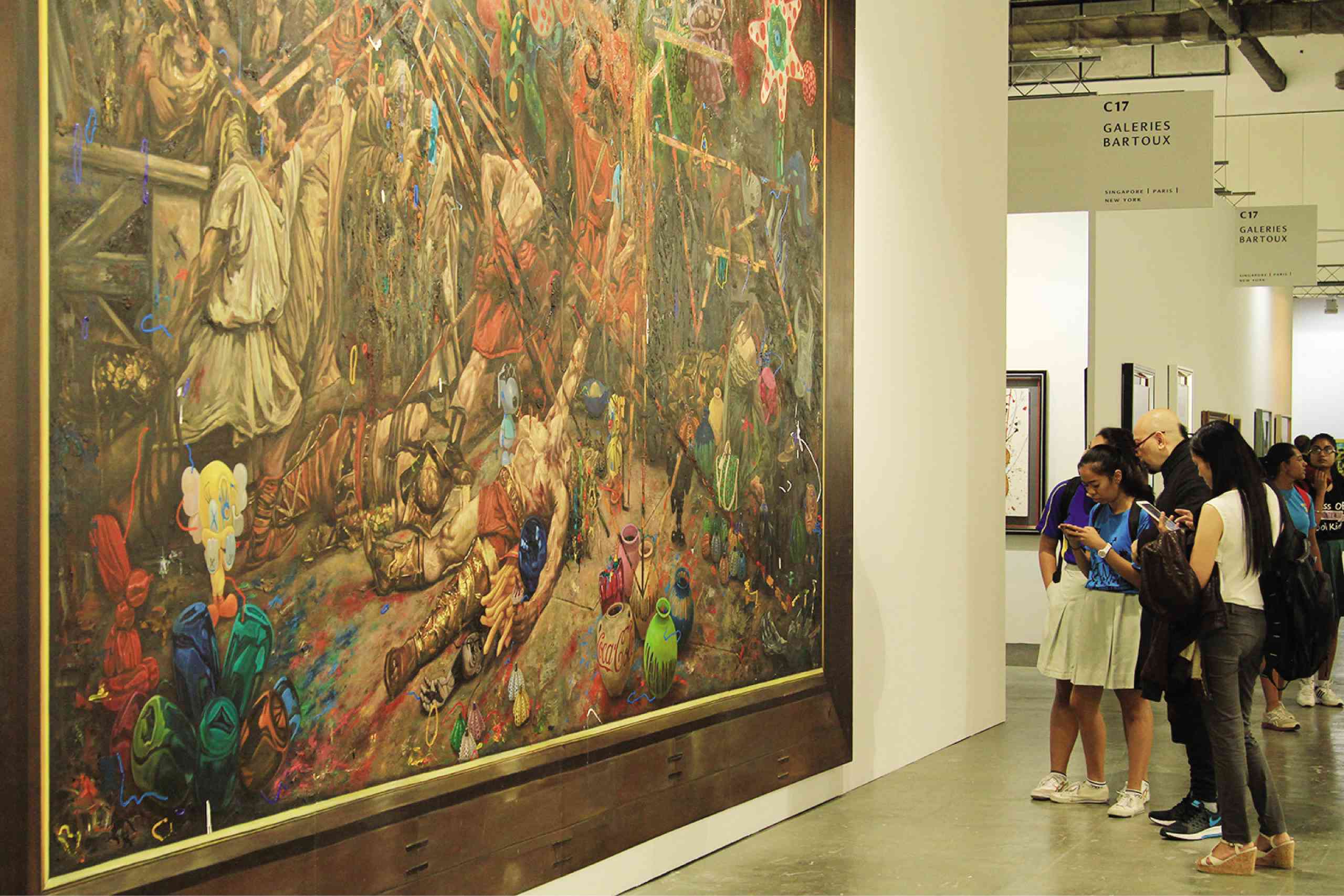 SINGAPORE—In this city state’s flagship art fair that focused on Southeast Asian art, artists and galleries from the Philippines proved they could compete in the global art scene.

Nine galleries and 30 artists from the Philippines participated in the fifth Art Stage Singapore held Jan. 21 to 25 at Marina Bay Sands Expo and Convention Center.

Art Stage Singapore is one of the biggest art fairs of Southeast Asia.

Prominent galleries from different parts of the world graced the fair.

The Drawing Room had Yason Banal and Ged Merino. Silverlens represented Wawi Navarroza and Gary-Ross Pastrana. Kiri Dalena was with 1335 Mabini. Buen Calubayan was presented by 1335 Mabini and Blanc Gallery.

The Southeast Asia Platform program of Art Stage Singapore gives a perspective of the different arts in the region. It aims to introduce the art of Southeast Asia through biological sketches from selected artists. The selection varies, from paintings to installations, photography and performance art.

Artist-run gallery Light and Space Contemporary is one of the notable Filipino galleries at the event. It presented works by Ernest Concepcion, Geronimo Cristobal and Jason Paul Tecson.

“We were invited here when the director of Art Stage Singapore saw Tecson’s work,” said Cristobal, also a curator of Light and Space Contemporary. “Though we are just a small gallery, we decided to step up and participate in an international show.”

The director of Art Stage Singapore is Lorenzo Rudolf. He also started Art Basel Miami Beach in the United States.

Cristobal added they were amused at the reception of the foreign audience.

“People liked our works, especially Tecson’s pieces which are made out of refuse and garbage,” he said.

The Drawing Room, which also has a gallery in Singapore, presented Juan Alcazaren. Finale Art File focused on Wire Tuazon.

Jack Teotico of Galerie Staphanie said his gallery had Rom Villaseran featured in the fair. He explained the artist’s work, “Dragonfly,” connoted the dragonfly’s ability to exist before mankind in the present, and probably way past man’s extinction.

Nice to be around

Other Southeast Asian galleries recognized the works of Filipino artists and displayed their works in Singapore Art Stage. Most of these galleries are also in Singapore.

Mizuma and Yavuz galleries of Singapore exhibited Anton del Castillo and Winner Jumalon, respectively. The works of Jaime Roque and Ronson Culubrina were featured by Michael Jansenn of Singapore and Berlin.

Raffy T. Napay, presented by Singapore’s Artesan Gallery + Studio, said that he liked the experience of participating in international art fairs. He won the Ateneo Art Awards in 2013 and got a residency program in Artesan.

“The experience of being here is good,” Napay said. “It was also nice that there are many Filipino galleries here as well as foreign galleries representing Filipino artists.”

He was the only artist exhibited by Artesan Gallery + Studio, which displayed five of his works.