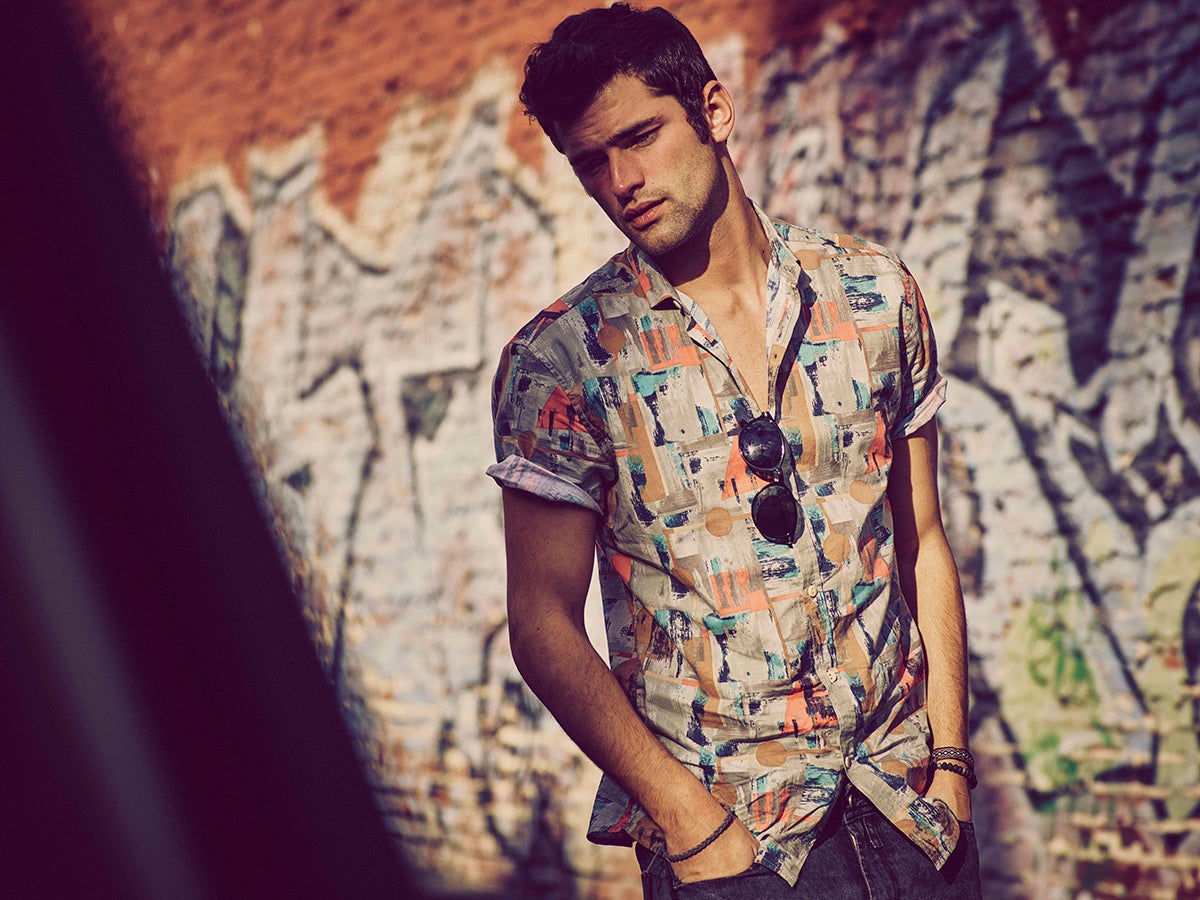 Last week, when Penshoppe posted a teaser of its new campaign on Twitter and Instagram, showing just half the face of its newest ambassador, the brand was met with a wave of OMGs.

“Please let this be Sean O’Pry,” one girl tweeted.

It was Sean, calling us from Los Angeles on an early December morning, just minutes after he finished shooting Penshoppe’s latest campaign.

His voice, low and friendly, was unfamiliar, but his face is not.We’ve seen it countless times—in our favorite glossies and, most memorably, in Taylor Swift’s “Blank Space” video. Yes, he’s the hot guy who caused T-Swizzle’s major music video meltdown.

“Oh my god, look at that face,” Taylor sang, and the video, which has been viewed over 400 million times on YouTube, showed us a close-up of Sean’s chiseled face and incredible blue eyes.

Sean was discovered on social media. He was a 17-year-old high school boy in Kennesaw, Georgia, when fashion stylist and former “America’s Next Top Model” judge
Nolé Marin spotted his prom pictures on MySpace in 2006. “It took them a couple of weeks to convince me but, when it happened, it all went from there. I got really lucky,” Sean told Inquirer Super.

He moved to New York, signed with Lana Winters’ VNY Models and hasn’t stopped working since, flying over 200,000 miles each year to get to his modeling gigs.

After less than three years, in 2009, he was named the world’s most successful male model by Forbes. He continues to be fashion’s top-earning male model and was No. 5 on the list of Top 10 male models of all time released by Vogue last September.

Soon you’ll see him on Penshoppe’s billboards as the brand’s newest ambassador. He’s the perfect match for supermodel Cara Delevingne, who was signed by Penshoppe last year and who has released a collection with the brand.

Penshoppe, which has over 300 stores in the Philippines, 10 in Saudi Arabia, 18 in Indonesia and two in Cambodia, has gone from booking Hollywood stars to signing hot names in fashion. “Sean O’Pry was an easy choice because, aside from him being the male face of fashion, he is someone who we can see rocking our stuff. His cool attitude resonates what Penshoppe stands for,” Penshoppe brand director Jeff Bascon said. “Just like Cara, Sean has a very cool vibe. They don’t try, it’s just who they are, which makes it more authentic and real. ”

They shot the campaign in LA last month. It was a fun shoot, according to Jeff. “Everyone was just in a good mood. We had the clearest of skies that day, which helped set the mood. It’s always a pleasure working with a good production team and an awesome talent who is just fully committed. Sean was full of energy. I like how infectious he was on the set. He made it easy for everyone. He had a good dynamic with the photographer. He was effortlessly cool in front of the camera.”

Sean said, “The shoot was great. The client’s incredible. Guy is great.” New York-based photographer Guy Aroch—who has shot everyone from Blake Lively and Bar Refaeli to Jennifer Lawrence and Hugh Jackman—was behind the camera for the campaign.

He and Sean had worked together on editorials for GQ UK. “I’ve shot with him multiple times,” said Sean.

“He’s an amazing photographer. His body of work is very impressive, and I really like his unique perspective and interpretation,” said Jeff.

Asked which pieces were his favorite, Sean said: “They had a great pair of jeans, and they had amazing sweaters. Really nice sweaters.”

The campaign will officially be unveiled today, with billboards expected to go up in the coming week.

Fans can expect a lot more from Penshoppe this year. Jeff said, “There are so many things lined up for 2015. The coming collections are amazing. I can’t wait to have them hit the stores already. It’s all about stepping up one’s game and, with Penshoppe, we’re just getting started.”

And maybe, just maybe, the plans include Sean’s visit to the Philippines?

I like a good pair of jeans, a white Tshirt and a leather jacket.

Is it true that you love hats?

Is there something you’d never wear?

How much fun did you have shooting “Blank Space” with Taylor Swift?

It was a blast. She was incredible; Joseph Kahn, the director, was incredible. They’re just two talented artists and it was a pleasure to be a part of it.

Did you have fun shooting Madonna’s “Girl Gone Wild” video as well?

I do. I’m studying right now. We’ll see how it goes. There are some cool things happening.

Was modeling something you thought about doing before you were discovered on MySpace?

Not really, not really.

Growing up, did you always know you were good-looking?

No. I had a very long period of being awkward (laughs).

How aware were you of the fashion world when you started modeling?

Not at all. I thought Fendi was a food.

Have you adjusted by now?

I’ve been here eight years. I know a lot more than I did then.

What surprised you the most about the modeling industry?

Nothing. I came with an open mind.

How does it feel to be named the world’s most successful male model?

(Laughs) It’s nice to hear when people say that.

I used to. Sometimes you don’t want to read what people say.

If you weren’t a model, what would you be doing now?

Everything. Everything I do, I’m passionate. There’s no other way to be if you’re not going to be passionate.

Do you miss football?

You never get to play anymore?

No. But Imiss baseball more.

Can you tell me a little more about your dog?

Mya is incredible. She’s technically my girlfriend at the moment (laughs). It’s just me and her. She travels with me sometimes, but I’m very lucky to have a close group of friends (who take care of her).

How often do you get to go home to Georgia?

As often as I can. But you know, with the schedule and class right now, it’s difficult. But I’m going home in about 10 days.

What do you miss the most about it?

My family. I mean, it’s Georgia. That’s where my family is. And the trees. I miss the forest.