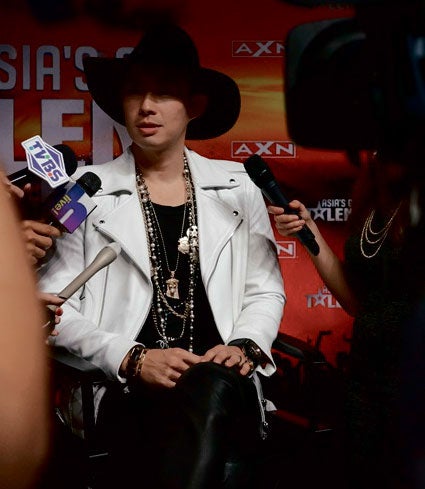 Van Ness Wu: Still a heartthrob after all these years

“How many cameras do you have, woman?” Van Ness Wu asks after I squeeze past a number of all-female international journalists for the second time to get to him.

A lot, I reply sexily in my head.

What comes out of my mouth instead is a mumbling and almost whiny, “The first photo we took together was blurred.”

I then press into his hand three F4 CDs, which I have lovingly kept safe for 12 years, and a metallic gold Sharpie.

I try to stand as composed as possible without letting out the scream that was building up in my chest.

He hands the CDs back to me, I hug them close to my heart and walk away grinning from ear to ear. I don’t even realize that I blurted out “Oh my God” loudly until strangers smiled while giving me the thumbs-up sign.

Van Ness was a member of the Taiwanese boyband F4. The group was formed after the success of the TV series “Meteor Garden” in 2001.

When the series was shown locally in 2003, F4 became wildly popular.

He was recently named one of the judges on AXN’s “Asia’s Got Talent.”

At the show’s official launch in Marina Bay Sands Singapore, I see Van Ness again after more than a decade. I amnot the only one excited.

His fellow judge and Indonesian icon Anggun tells everyone that her sister is a big fan of Van Ness.

Van Ness walks on stage wearing a black shirt and pants, white jacket and a cowboy hat that covers half of his face for the most part of the program.

When a reporter asks what specifically he is wearing, Van Ness quips, “Clothes”—in all seriousness before breaking into a soft smile.

He does not smile a lot, but he makes people laugh.

He says “Mabuhay!” and waves when he finds out that we are Filipinos.

Rovilson mentions that, among the four judges, Van Ness is the one who talks to the contestants in their native languages. He is fluent in Mandarin and English, but he can also speak Japanese, Spanish, Cantonese and Korean.

“A lot of my fanbase can speak only Mandarin. This is the only time that they are going to hear me speak in English, which I am really more relaxed and more articulate in. It is a side of me that they have never seen before,” he says.

He is currently doing two movies. His schedule almost did not allow him to agree to “Asia’s Got Talent,” but he saw Foster’s name among the judges. He conspiratorially lowers his voice and tells our group that he’s a big Foster fan.

In jest, though, he calls Foster “The Dream Crusher,” because of the latter’s strictness and standards in choosing talents. Meanwhile, Van Ness’ fellow judges call him the sweet guy.

“I don’t try to be sweet or anything. I just like to relate to the acts that come up. A lot of them are young kids… that was how I started,” he says. He admits that he sometimes votes “yes” to a contestant for encouragement.

(Read “Melanie C: It’s quite a phenomenon that there are a lot of great singers from the Philippines”)

He says he would dance like crazy to impress the judges if he was auditioning for a show.

“Talent is something you find that you really enjoy doing, until it becomes a passion. It allows people to become something more than what they were before,” he says.