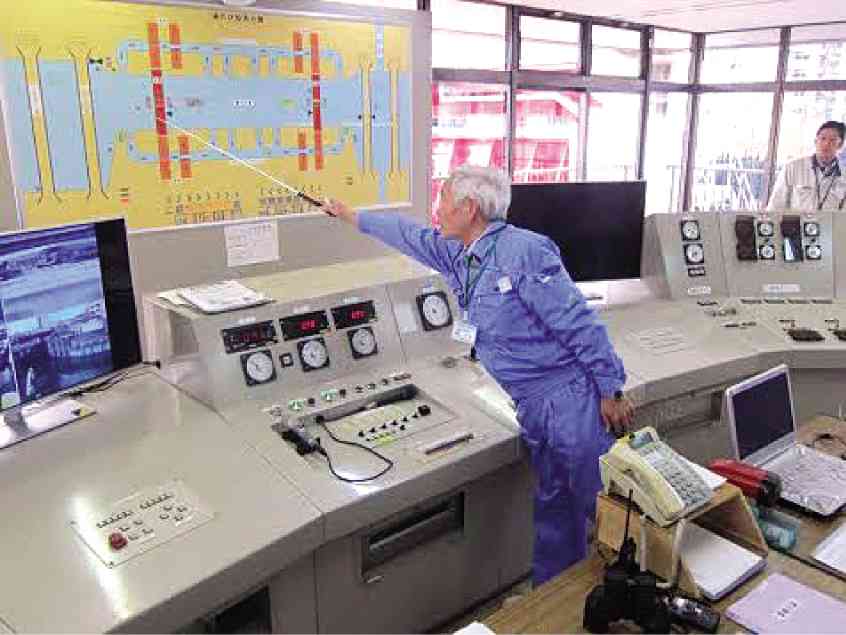 IN THE town ofNara, elderly staff brief reporters on their heritage efforts.

Apart from its inimitable cuisine and all-embracing respect for tradition, Japan is characterized by the efficiency of its systems.

One can say that this country is like a duck gliding serenely across a pond. Beneath the water’s surface, however, its webbed feet are paddling furiously.

Upon the invitation of the Ministry of Foreign Affairs and its Foreign Press Center, Japan’s “curtain” was recently drawn for journalists from across Asia—who looked at how the Tokyo Metropolitan Government, together with public and private entities, improves people’s lives by making things run smoothly.

For eight days, media visited key places including an underground regulating reservoir of Tokyo’s Kanda River, where a 2-kilometer-long tunnel was completed in 1998. The tunnel, which took 10 years to build, is designed to take in some 240,000 cubic meters of floodwaters that can then be discharged into Tokyo Bay.

For the project’s second phase, the Tokyo Metropolitan Government constructed a second connecting tunnel measuring 2.5 km that can store 300,000 cubic meters of floodwater.

The tunnels were built to benefit low-lying areas that have suffered from floods starting in September 1958.

What caught our attention was how the floodwater is drawn into the tunnels during strong typhoons. Instead of rushing noisily, the water spirals down, muffling the roar that would have disturbed nearby residents.

In another part of the city, the Floodgate Management Center operates by remote control the floodgates in the eastern part of Tokyo. An elderly staff monitors multiple screens, opening and lowering gates for ships to travel along a river.

That’s still another noticeable aspect of life in Japan—its senior citizens are encouraged to work even in their 60s and 70s.

Our guide, Yuko Marumo, explained that most Japanese seniors opt to continue working instead of retiring and staying at home. “We want to be of service to our country. Working gives us a sense of purpose,” he said.

Apparently the Japanese take pride in their work. It could be seen in their meticulously prepared food that delights the eye before it is picked by chopsticks.

It could also be seen in the way a gardener tends to a bush outside a restaurant where we stopped for lunch. It was freezing that afternoon but he alternately clipped and stopped, checking his handiwork using a pair of bonsai shears with a keen eye for balance and proportion.

In the command room of the Saitama Prefectural Police, a lean, well-trained staff keeps close watch on a 6-meter-long center display board and several CCTV monitors. They are able to focus because local anticrime volunteer groups (called Wagamachi Bohan Tai) look out for elderly residents and anyone who might require assistance.

Apparently, elderly folks who live alone are targeted by con artists with a modus operandi similar to “dugo-dugo” gangs in the Philippines.

First they phone their target about a daughter, son or grandchild who has just met an accident and needs money. The frightened senior is told to bring cash to a meeting place.

A new scheme now involves instructing the victim to deposit the money into a bank account.

To discourage this dastardly deed, volunteer groups regularly visit senior citizens, warning them against such rogues.

On another occasion, we saw how the Integrated Control Center of the Tokyo Metro dispenses data and weather information among controllers for traffic, electric power, trains and facilities. This real-time information dissemination ensures that Tokyo’s 13 subway lines function like clockwork.

Japan has much to be proud of, even if its level of preparedness for natural disasters like floods and earthquakes might seem a bit too much.

But in fact, there is a Disaster Reduction and Human Renovation Institution housed in two buildings in Kobe that has dioramas depicting the Great Hanshin-Awaji Earthquake that hit on Jan. 17, 1995. Yuko said that as children, they were taught to always prepare for “the big one,” that big quake that could spell death.

Perhaps it is the acceptance that life is short and precious that makes the Japanese value their time. It makes the elderly want to remain employed well into their twilight years.

And it makes the duck continue paddling furiously, but with nary a feather out of place.