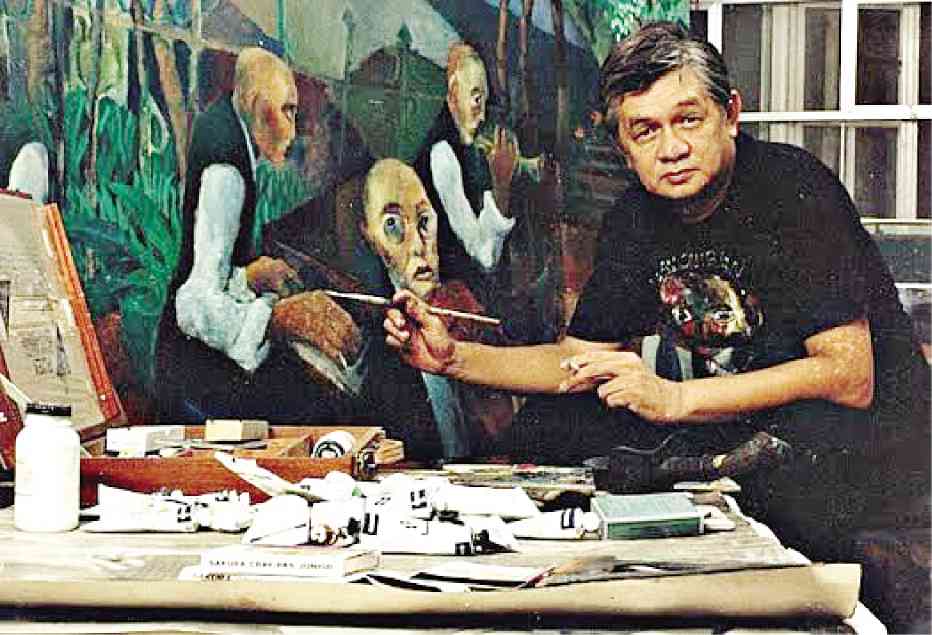 During the early years of my marriage, the biggest problem was coming up with food for my husband and two toddlers.

Of course, I considered myself lucky that my husband was not at all a gourmet—he was just a huge eater. He ate literally anything; he remains the only guy I have known who ate corned beef straight from the can!

It would have been easy if I had a competent cook. Trouble was, it was a case of the blind leading the blind. Once, the cook asked what to do with some crabs I had asked her to buy in the market. I told her to put the crabs in a pot of water, and boil them until the water evaporated.

That night, I excitedly told Onib we were having crabs for dinner. My husband smacked his lips, ready to wolf down a special meal. When he pried the crab open, alas!—there was no flesh at all. The poor, emaciated crustacean had literally been reduced into a shell of its former self!

With such culinary disasters, I was utterly grateful when Onib excitedly told me that he had found a watering hole where he could buy a decent lunch at very reasonable prices, and was even given space to set up his studio-cum-office—entirely free of charge.

That was in 1974, when he and his friends Manny Arriola and Allan Cosio discovered a pensionne at 1771 M. Adriatico Street, known as Malate Pensionne. It was a three-story building with a dining room that doubled up as a game room. Here Onib and his friends could play backgammon or  chess.

Onib also had a field day sketching the expats from the Peace Corps and tourists who stayed at the pensionne, a favorite of foreigners because it had a beautiful garden.

He became a good friend of its proprietors, José “Joe” Gutierrez and his wife Rosie. In one of his conversations with the couple, Onib found out they had a son named Ricky who, a few years after graduating from college, had already set up his business.

A game of chess

In 1980, Ricky used the basement in the pensionne as his office.

One day, he went to the dining room, said hello to Onib, joined him in a game of chess, and eventually struck up a friendship with my husband.

According to Onib, he would usually challenge Ricky to a game of chess and backgammon, and the winner would be entitled to a free lunch. Nine out of 10 times, Onib would lose to Ricky. Over a period of eight months, when the two scored their games, Ricky exclaimed, “Pare, you already owe me 68 lunches!”

Onib related that he paid off his “debts” by giving him pastel paintings. (This practice would eventually make Ricky one of the biggest Onib Olmedo collectors in the country when Onib made it big in the late ’80s.)

In 1984, Rosie Gutierrez asked Ricky to help out in the family business, which was then in a financial crisis. Ricky took over as general manager of Malate Pensionne and set its finances in order.

Four years later, in 1988, he raised the capital to convert the garage of the pensionne into a fine-dining restaurant. He partnered with Tess Bautista and Vicky Pacheco, who had just returned from studies at the world-famous Les Roches international hotel school in Switzerland.

Finally, a year after the groundbreaking ceremonies, Onib brought me to the restaurant. I found myself gushing over its interiors that looked like a cozy French bistro.

The restaurant had a romantic ambience—the perfect setting for our dinner date when Onib and I celebrated our 15th wedding anniversary.

My husband now found himself savoring French, Swiss and Italian-inspired dishes. His personal favorite was Pasta Chorizo, the standard Italian dish that had been given a distinctively Pinoy flavor.

Instead of sketching in the dining room of the pensionne, Onib now brought his sketchpad to the terraced walkway between the kitchen of Chateau 1771 and Malate Pensionne, where guests would often take coffee and snacks al fresco.

As early as 10 a.m., Onib would be furiously sketching away. When it was almost noon, he would peek through the kitchen window and teasingly ask Vicky, “O, handa na ba ang staff meals? Pasali naman.”

This would be Onib’s favorite watering hole from 1988 onward, where he would head at 10 a.m., after dropping off our daughters Bambi and Franjo at St. Scholastica’s College on nearby Leon Guinto Street. He would leave at 3 p.m. to fetch them at dismissal time.

This would be one of the most prolific phases in Onib’s artistic career, when he started to earn not only critical acclaim but also great success.

Because my husband spent five hours every day in a restaurant setting over a period of 10 years, he naturally used waiters and bartenders as models for many of his paintings. Once, a waitress shyly approached him and said all her co-employees kept teasing her that Onib would never use her as his model because she wasn’t pretty.

To her surprise, Onib instantly got out his sketch pad and made her portrait. After an hour, the waitress proudly showed off his work of art to her colleagues.

Vicky Pacheco had an entirely different experience. She had hung her portrait by Onib in her bedroom. Later, she ruefully told Onib and Ricky that she decided to keep the painting under her bed, because her niece had screamed when she entered her aunt’s bedroom—the portrait must really have  frightened the wits out of her!

Visibly challenged, Onib took out an acrylic painting on a rolled canvas from his portfolio. Vicky gasped in amazement. The painting was breathtakingly beautiful, pretty violets floating against the background of a clear blue summer sky.

Vicky bought the painting on the spot, and proudly hung it on the walls of Chateau 1771.

It was not only his career that prospered during his painting sessions. His relationship with Ricky also developed into a lifelong friendship.

The two men were opposites in terms of personality and temperament. Ricky was a committed entrepreneur who kept an eye on the bottom line, while Onib was a free spirit with a bohemian outlook.

What they had in common was their appreciation for culture and the arts, particularly painting and music. Onib and Ricky loved the whole spectrum of musical genres, from classical to New Wave, alternative and jazz.

In 1991, Ricky converted the storage area of Chateau 1771 into what was aptly named Sidebar. Onib and Ricky became two of the bar’s habitués.

Because my husband was allergic to all kinds of alcoholic drinks, he would just savor cup after cup of coffee (he usually downed 10 cups a day), as he reveled in the atmosphere of Sidebar.

In the mid-’90s, Onib and Ricky began to sense that their old, beloved Malate was fast morphing into another kind of community. High-rise condos were replacing residential homes and restaurants, and seedy bars were mushrooming.

When he came home one night in May 1994, Onib sadly told me that Ricky had decided to close down Chateau in Malate, and would be relocating the restaurant to Ortigas.

Ricky had commissioned him to paint two murals in an interaction with his buddy, Allan Cosio: One would depict the façade of Chateau 1771, the other would capture its interiors as well as the ambience and flavor of the old Malate.

In November 1994, their “magnum opus” was approved by Ricky.

Onib brought me to the grand opening of the restaurant at the El Pueblo compound, on the corner of Julia Vargas and ADB Avenue in Ortigas.

These paintings had been commissioned by Ricky in 1992, when Onib was fresh from his success at the international biennial competition in Cagnes Sur Mer, France, where he bagged an honorable mention, beating hundreds of entries from countries the world over—the very first Filipino to be accorded this distinction.

The restaurant also featured a winding spiral staircase leading to the new Sidebar on the second floor. On the wall was the masterpiece of Onib and Allan in oil on canvas.

Onib’s favorite dish in his new watering hole was sinigang na ulo ng salmon, a bouillabaisse-like recipe, featuring the juicy head of salmon imported from Norway, with the sour tamarind taste of our traditional sinigang.

As fate would have it, my husband would get to enjoy his favorite dish only for a limited period. He ate his final dinner in the restaurant that he had grown to love over the years. On the eve of his last day on earth, Sept. 8, 1996, Onib indulged himself in the lavish buffet hosted by Metrobank for the winners of its annual art competition, for which Onib was a perennial judge, and went on to supper with Ricky.

According to Ricky, after the meal, Onib went around the restaurant, pensively looking at his paintings, and his parting shot to his friend was, “Pare, take good care of my paintings, ha.”

Ricky took his friend’s last wish to heart. His latest Chateau 1771 at Greenbelt 5, Makati, is a veritable Onib Olmedo museum, with his two murals and paintings standing as testimony to an outstanding artistic career, which flourished along with a lasting friendship.