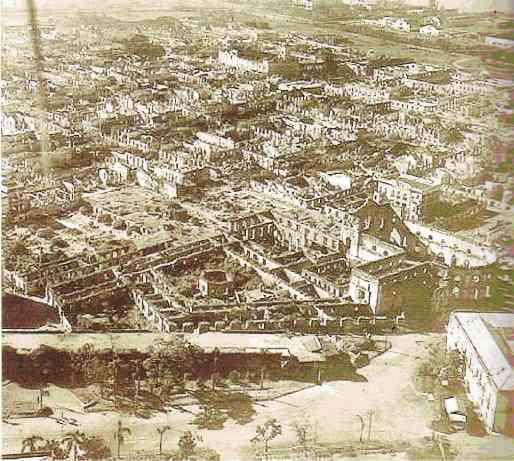 Lita Carlos and her cousin Ernesto “Esto” Lichauco heard it at the same time late Saturday afternoon, Feb. 3, 1945— the drone of low flying aircraft. From the Lichauco residence on Aviles (now J.P. Laurel) Street near the corner of Mendiola Street, they looked where the sound came from, to the north, and saw the flight of about half a dozen American planes.

In Balic Balic I was leaving the parish house after a meeting. It was 5:30 p.m. GEAST (Greater East Asia Standard Time), and the planes passed directly overhead flying to the northwest in a straight line.

In Quiapo on R. Hidalgo Street. the Valdes family was seated at merienda after the final day’s prayer of the novena for their deceased mother, Doña Rita Legarda de Valdes, who had died on Jan. 26 and had been buried in the backyard because no wheeled transport was available for a cortege to the cemetery.

They heard the planes, too, and Doña Rita’s stepson, Col. Alejo Valdes PC, Ret. got up to leave. His brothers and sisters urged him to stay the night, but he declined, feeling he had to be with his family. They never saw him again because he was beheaded with a son a few days later.

On Aviles Street, Lita and Esto heard the sound of tanks a short while later coming from Mendiola Street. Opposite the other side or western end of Malacañang, my uncle Jose “Pepito” Legarda, heard the same sound and looked up. There was still light in the sky. It was the light of the setting sun seen by CBS correspondent William Dunn, who wrote in his book “Pacific Microphone”: “The sun was setting over Manila Bay when we reached the [Rizal] Avenue (page 298).”

Esto’s father Luis telephoned Lita’s father Meneleo Carlos who lived on Herran Street in Ermita district. He had sent Lita and two younger siblings to stay with the Lichaucos, as Aviles seemed safer than Ermita with its Japanese troops and defenses. Already his pregnant wife Julita was missing, taken from a gaming room on Soldado Street, where she played mahjong and the Japanese suspected it to be a guerrilla nest and hauled everyone off. They were never seen again.

No one knew when the Americans would arrive, after the landing   at Lingayen on Jan. 9. The Japanese-owned Tribune headlined that day that the Americans had suffered 10,000 casualties on Luzon, but the strategic advantage was with the defenses, and that fierce fighting raged in Nasugbu.

After the Americans took Malacañang, some Japanese troops came up and there was fighting that night. It was before dinner time; the Lichaucos descended down into the air raid shelter and Esto does not remember if they even had dinner.

While the Lichaucos huddled in their basement , several blocks away at the corner of P. Paredes and España, my uncle, Col. Patricio Fernandez, Jago-pa, walking home in the gathering dusk after playing mahjong at our house, faced a column of America military vehicles.

“Which way is it to Santo Tomas?,” asked the leader. Uncle Patricio pointed the way.

The campus gate was closed, and the leader of the serial (or group) that had reached Santo Tomas, Col. Haskett Conner, stood talking with guerrilla Capt. Manuel Colayco, who had ridden with the column once it reached Manila.

His associate, Lt. Diosdado Guytingco, positioned behind a tank, told him to take cover as they were the only two in light-colored civilian clothes and thus tempting targets.

Suddenly a grenade came over the fence and wounded Conner in the legs, and Colayco much more seriously in the body. He received emergency medical treatment and eventually wound up at the 29th Evacuation Hospital, housed at an Andres Luna heritage building, the Legarda Elementary School, where he died a week later, the first Filipino martyr of the liberation of Manila.

The grenade blast prompted the Americans to force the gate with a tank, “Battling Basic.” It entered the camp with its headlights on and an infantryman crouching in front.

The internees, however, did not know the identity of the new arrivals, and some of them feared it might be Japanese armor come to massacre them.

From her cot in the corner of the main building 12-year-old Manila-born Irene Duckworth vowed to herself that in such a case she would die with dignity.

Suddenly a Japanese officer ran toward the tank brandishing his sword. The crouching rifleman gunned him down. Flares went up, and the internees erupted in cheers.

A mile away in Balic-Balic we were at family rosary after dinner and heard the yelling. Our first reaction, indicating our concept of the Japanese, was that the internees were being massacred. We looked out the window and saw flares lighting up Santo Tomas.

We phoned uncle Patricio to find out what was going on “The Americans are here!” he said. It was about 7:30 p.m.

The Japanese were caught by surprise by the sudden entry of the American “Flying Column.” That morning they were still confiscating automobiles, like our neighbor Don Paquito Lopez’ Buick.

CBS correspondent Dunn wrote, “Nowhere else in the history of warfare would you find a military commander send a force of only 800 men into a city of more than a million population known to be held by the equivalent of at least two divisions of infantry (op. cit. 289)”.

It was an impossibility, but MacArthur pulled it off.

But if the Japanese were unready for the sudden entry, they had their basic plan prepared: destruction.

Those three hours between 5 and 8 p.m. on Feb. 3 were the start of what would take place for a whole month, leaving 100,000 noncombatant civilians dead and the capital wrecked without electricity, without telephone service, without transport, without water, three centuries of cultural heritage up in smoke, and the city in ruins overhung with the stench of rotting flesh. These were the benefits of Japan’s. Greater East Asia Co-Prosperity Sphere.