People with autism can do ‘A-OK’ in the workforce | Lifestyle.INQ ❮ ❯ 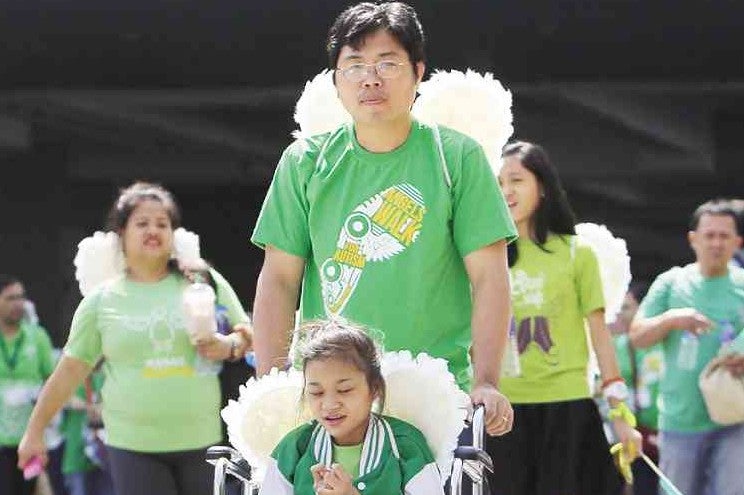 “ANGELS Walk for Autism” at SM Mall of Asia

People with autism can do ‘A-OK’ in the workforce

The Autism Society of the Philippines (ASP) has a new battle cry for the 21st century. As the autism population in the country, and worldwide, gets older, it established A-OK Philippines to address the issue of finding permanent employment for people with autism spectrum disorders.

Launched this year, A-OK Philippines (Autism OK) hopes to inspire acceptance, accommodation and appreciation in universities, businesses and workplaces. It aims to enable autism-friendly establishments and workplaces, promote job transition specialists and coaches as well as livelihood opportunities, and discover and share stories of triumph.

Big firms such as the SM Group, CebuPac and Singapore Airlines are committed to undergo sensitivity training twice a year on how to deal with customers with autism. This time, they’re also looking into the possibilities of employing them.

“We have to transition our services and approach from the school and the homes to society and public places in general. These maturing people with autism need livelihood. Before we can do that, we need more trainers, job coaches and transition specialists from within the education sector so that they can help the parents and therapists with the whole process,” said Mona Magno-Veluz, national president of ASP.

ASP, which celebrated 25 years of autism advocacy last year, is a nonprofit organization that works toward an environment that empowers persons with autism spectrum disorders to become self-reliant, productive and socially-accepted members of the community.

Professionals on the spectrum will do well in the visual and performing arts and technology, such as software testing, programming and data management, Veluz said.

Famous people with autism include actor Dan Aykroyd and Daryl Hannah. In the Philippines, there’s Gabby Atienza, the graphic novelist behind “My Life As A Comic Book”; Tikoy Basilio, the pen-and-paper artist who represented the country in the “Art for All” program in Thailand last year; and Tumtum Mendoza, the marimba prodigy who recently graduated from the University of the Philippines College of Music and snagged the gold prize in the 2013 National Music Competition for Young Artists.

“They don’t communicate with people well, but are able to do it with an intermediary like PCs and laptops,” Veluz said.

Right now, teachers go out of their way to ask companies if they can hire people with autism. Veluz said they also have contacts with LGUs to start mandating sensitivity training for all businesses in their areas. ASP also partnered with Unilab Foundation’s Project Inclusion, which is currently developing an HR manual that the ASP can bring to prospective employers.

“I think compassion is something very personal and something that is in the culture. We are looking for compassionate workplaces where management itself is driving the compassion,” Veluz said.

The problem with sponsors, however well-meaning, is the lack of permanence. When the sponsor goes away, for example, the person with autism will inevitably feel displaced in the workplace. It is important that the entire company not only be trained, but also be accepting of people with developmental disabilities.

Veluz added that the ASP is looking for real jobs, not token work, where people with autism will be given equal compensation.

“If someone isn’t qualified, they should not be hired. But if they have the right qualification, with just that little glitch called autism that’s in the way, I think the right accommodation would go a long way,” she said.

Part of the job coaching and work transition training has a lot do with how people with autism manage themselves. Veluz’s son, who works in a restaurant, would request to be excused from work when he feels he’s about to have a meltdown.

“He calms down in a corner outside, and when he feels he’s okay, he goes back inside. That behavior is developed over time. When my son was small, he would cry from Cavite to Quezon City in the car. But now he’s able to process it better, and we help him do that,” she said.

ASP also launched a pilot project in the Philippines that aims to improve the quality of care in the country. The pilot, called Care Circles, is a service app for tabs and smartphones, similar to Facebook, developed by the software company SAP (available for free in Apple’s iOS).

The parent of a child with autism becomes, overnight, the main source of information for anybody who is interested in the child. That includes the father, the sister, the brother, the aunt, the grandmother and everyone else involved in the child’s life.

“It’s quite a responsibility. But if you have a tool like Care Circles, it can help take that responsibility off your shoulders. These days you get an avalanche of information. It’s just too much, when most parents just want a document or two to read simply what it means,” said Andy David, director for Healthcare in Asia-Pacific at SAP.

SAP employs people with autism in its IT division.

An estimated one percent of the world population has autism spectrum disorders. In the Philippines, they comprise about 1 million of the population. Of this number, only 10 percent are diagnosed with autism, and only five percent of that is seeking treatment.

Veluz said that in the 1970s, only one in 10,000 were estimated to have autism spectrum disorders. Today there’s one in every 68 people. That’s more than the number of people with Down syndrome and cerebral palsy, she said, and the rate growth is greater than HIV or cancer.

“You do the math. Eventually a lot of people will have autism. It only makes sense for us to be able to adapt to that. We would like a world where the autism society doesn’t have to exist anymore because every employer and school would be okay with autism,” she said.