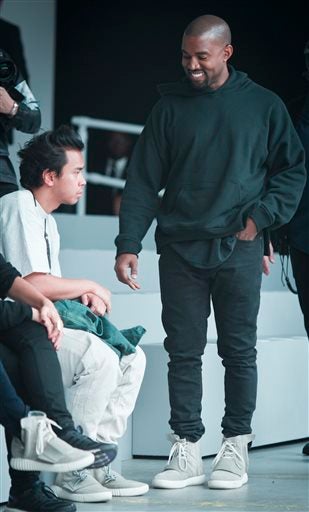 NEW YORK— With Beyonce, Rihanna and Diddy among the front-row celebrity royalty, Kanye West rolled out his Yeezy Boost shoe line for Adidas on Thursday as his baby North fussed in mama Kim Kardashian’s arms next to a stone-faced Anna Wintour.

Models, men and women, wore minimal neutral tights or street wear in red, green and black to let the shoes shine in a tech-driven unveiling that included a simulcast to 42 theaters on three continents around the world.

A mysterious Yeezy website with a countdown clock had gone up last week to stoke excitement over the highly anticipated release, West’s inaugural collaboration with Adidas Originals.

An app was set up to take reservations for the gray suede high tops, to be collected and paid for at Adidas and other stores Saturday — in New York City only for the moment.

Reservations were full within minutes, an Adidas spokesman said. Only 9,000 pairs of the 750 Boosts will be sold, at $350 a pop, on Saturday with more available Feb. 28 worldwide.

Kanye’s voice was on blast talking about art, freedom and making a difference as the show opened in a cavernous space downtown. “I want people to feel like awesome is possible,” he declared. Then came the calming drone of a trumpet, followed by loud, edgy music as his models stood solemnly in rows. They marched in lockstep to take their turn in front of a scrum of cameras before walking off in single file to make room for the next line.

West has promised the presentation will be repeated over two days at 10 locations. Lucky ticket-holders who scored theater seats in countries ranging from Australia and Finland to France, Germany, Russia and the UK got to watch live.

Backstage after the show, West was chill and smiling, a pair of his new Yeezys with their thick white soles and wide strap across the laces in place. A side zip and front perforations complete the look of the lead style, which comes with a spare set of laces.

The rapper has big plans to create more Yeezys, for women and kids as well, after leaving Nike for Adidas more than a year ago.

He has spoken of the “isms” in fashion and in life — classism, elitism, racism. But on Thursday, after the crowd thinned out, he had no problems on his mind, refusing to talk about his Grammys diss of Beck, which he retreated from in a radio interview Wednesday.

“I just focus on beauty, fabric, proportion and try to get the price where the kids can get a hold of it,” he told The Associated Press of his Yeezys after urging fans to avoid “shoe wars” and thefts and be patient for more of the shoes to come.

How do the trainers symbolize Kanye?

“It’s not me. It’s the people,” he said. “I think that there’s something that people have been wanting and missing and this is my proposition, you know, to contribute in some way. I want to contribute to society through usable art.”

“I thought it was beautiful,” she said backstage after the show. “Very innovative. I loved how the ladies lined up.”

Also attending were Kardashian Momager Kris Jenner and Kim sisters Kendall and Khloe, who smiled from the front row against the backdrop of New York Fashion Week’s opening day and the NBA All-Star game this weekend.