Flowers are good, but for romantics, love's not just about that | Inquirer Lifestyle ❮ ❯ 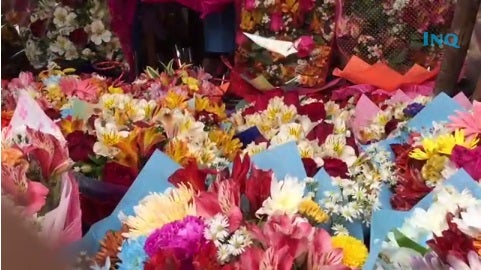 Flowers are good, but for romantics, love’s not just about that

MANILA, Philippines—Times may have changed, but for an 82-year-old man, the love he has for his wife has never wavered in the last 44 years.

Hermenegildo Cruz was among the throngs of people who trooped to tiny shops in Manila’s Dangwa Market to purchase flowers, either bundled in bouquets or arranged in pots and baskets in time for Valentine’s Day.

Cruz, a former Philippine ambassador, bought a bouquet of flowers for his wife, with whom he has been married for 44 years.

“This is for my wife. A simple gift from me, my grandchildren and my children,” he said.

Celebrating Valentine’s Day, according to him, has evolved through the years, though the tradition remained similar.

He said love letters used to be part of Valentine surprises for couples but the advancements in technology have tweaked how the occasion is celebrated.

“There were no text messaging nor videos before. It was purely through love letters,” he said.

But at one point, he noted that technology has been helpful for those who cannot make “personal appearances” to their loved ones.

For teenager Anthony Ogalesco, he never fails to surprise his girlfriend for the past four years.

Ogalesco said giving flowers on Valentine’s has been part of a Filipino tradition.

Asked what true love means to him, he said “love (cannot) be defined.”
For Paolo Catibog who also went to purchase flowers in Dangwa, more than sweet gestures, making a loved one feel special not only on Valentine’s Day is what matters the most.

The 23-year-old student admitted that he has been courting someone for six months and hopes that his efforts would finally pay off.

According to him, true love is holding on and being with your loved one no matter what happens.

Perfect, even if imperfect

For Aron Valencia, his presence would be the most special gift on Valentine’s Day for his girlfriend.

He said he and his girlfriend will spend a “simple and chill” Valentine’s Day.

For him, true love is when you feel that you want to be with that person “forever.”

John Aldwin Sumigad, 17, Valentine’s Day has become an occasion of surprising your loved ones with flowers.

True love, he said, is “seeing your partner’s imperfections as her perfections.”

From the days leading to Valentine’s, a steady stream of customers have been going to Dangwa to purchase special gifts for their loved ones. They brave the traffic and shrug off the spike in prices so they can express their affection for the people that truly matter.