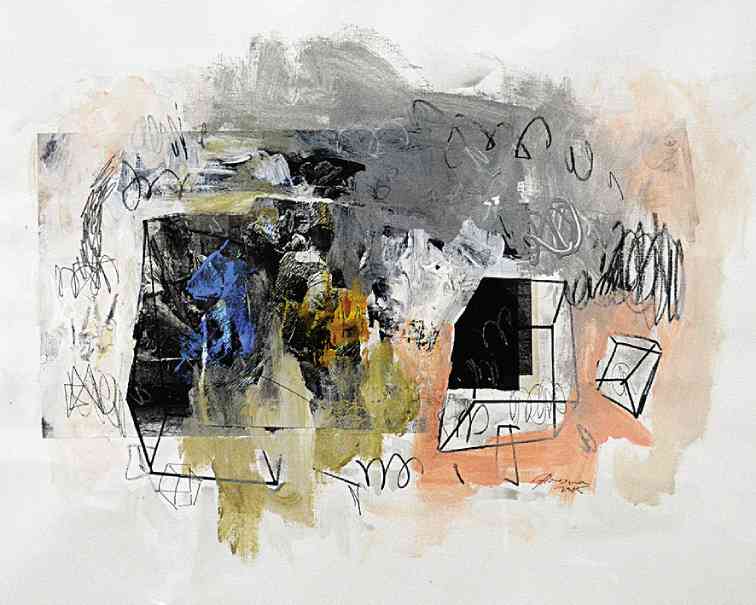 MANILA, Philippines—Demi Padua, an artist who has evolved various idioms in his artistic development, trained in Fine Arts at Far Eastern University. Starting with figurative drawings, he has moved to abstract and collage.

Padua is influenced by Gus Albor and Lao Lianben. His works are characterized by texture and impasto and, like Lao’s art, his deliberate brushes of acrylic, charcoal and other mediums appear on his canvases. Albor’s influence could be gleaned in the subdued colors of his artworks.

Demi is comfortable with his newfound style—collage. He revels in the use of mixed media.

For him, there is excitement from the first layer, where he puts the print, to the succeeding layers of drawing and painting.

“The washes of paint serve as a bridge or transition from solid to transparent; it is the freedom of paint to follow its nature,” he said.

Demi emphasized that he drew like a child in his collage.

Padua has won a slew of awards, including the Grand Prize in the 2013 Bangko Sentral ng Pilipinas Tanaw Art Competition, and the AAP, GSIS Museum and Metrobank awards.

Padua’s new creations give a tridimensional effect achieved through meticulous brush strokes and lines. The boxes in his paintings convey his message of “nonadherence to boundaries,   his love for freedom and thinking out of the box.”

Padua believes he would always find connection with his artwork, from the brush he uses to the brush strokes. He is meticulous yet free in his colors, as he would not give in to inhibitions in his style or colors.

This artist started showcasing his works in group exhibitions in 2004. His first solo show was held in 2005 at Galerie Astra, where his succeeding solo shows were also held.