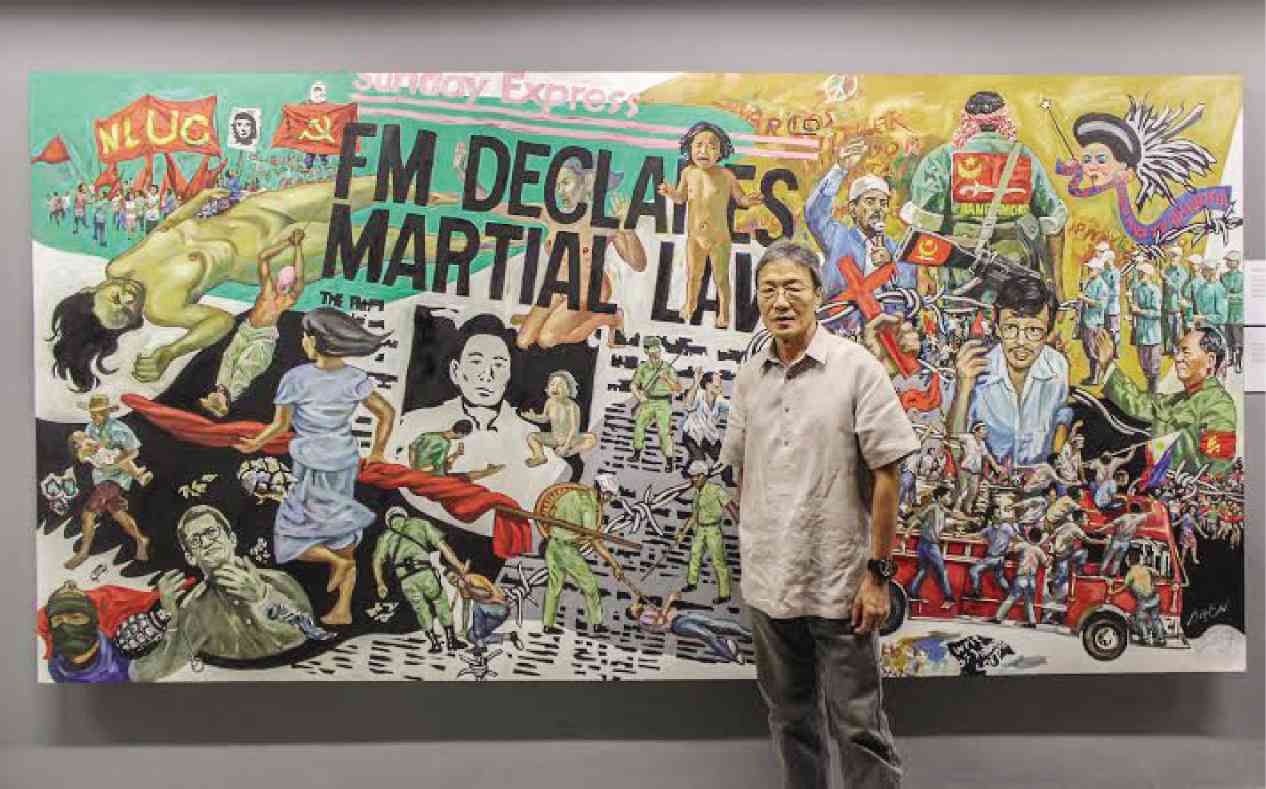 ADI Baen-Santos and his “Martial Law in the Philippines”

MANILA, Philippines—Considered the first exhibit depicting Philippine history through murals, “Siningsaysay” will portray the struggles of the Filipino people across the centuries. It will be the inaugural exhibit of Gateway Gallery in Gateway at Araneta Center in Cubao, Quezon City, on Feb. 18.

The exhibit is a project of UP, UP Alumni Association and Araneta Center.

Siningsaysay is a portmanteau of the words sining (art) and kasaysayan (history).

“This is a project of grand scale and magnitude, the first of its kind, a program that will forever be a venue for engaging the public in a continuous discourse on the important times of our history,” said UP project team member Alfonso.

Each of the artists was assigned an incident or theme in Philippine history and given the freedom to interpret it. All artworks stands at a dimension of 6 x 12 ft.

Filipino prehistory is depicted in the work of sculptor Yee, who tried to recreate the Angono petroglyphs in Rizal province. Yee said he used a special type of plaster as medium.

Solon’s “Pre-Hispanic Philippines” highlights the various lumad or indigenous communities in various parts of the country such as the Manobo, T’boli, Yakan, Tausug.

After Artificio’s “Re-asserting of Independence,” the American occupation is tackled in the paintings of Dreo (“American Betrayal of an Ally”); BenCab (“Filipinos Experiencing Invasion”); and Cruz (“The Philippines under Stars and Stripes”).

World War II and Reconstruction are tackled in Samson’s “Japanese Occupation” and Meimban’s “Building from the Ashes.”

Because of the size of the works, the exhibit will be held on the entire fifth floor of Gateway, the shopping center in Cubao.

Pascual said there were plans to house the huge paintings permanently at UP Diliman.

“We are thinking of converting one of the spaces at the Central Library into a gallery for these giant artworks,” he said.