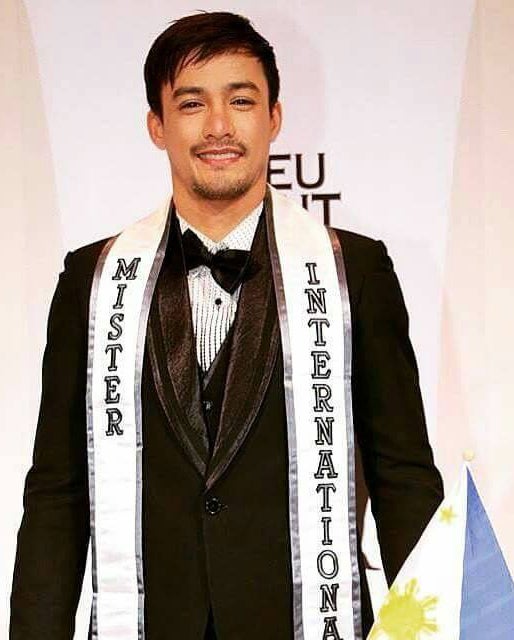 MANILA, Philippines–A bomb-defusing policeman who shot to fame for his buff physique and pretty face is now officially known as the world’s hottest man.

PO2 Mariano Flormata, also known as Neil Perez, strutted victoriously on the catwalk, holding a small Philippine flag in his right hand and his trophy in his left after he was adjudged Mister International in Ansan, South Korea, on Saturday night.

In a video of the pageant posted on his Facebook fan page, cheers of “Go Philippines!” and “Mabuhay ang Pilipinas!” rippled through the audience as he was announced the winner.

The 1.8-meter (5-foot-11) Flormata cried after he bested 28 other men in the global competition’s ninth edition. He said it was a hard-fought battle for the country.

“I was always thinking that this fight was for the country,” Flormata said in a statement. “And I cried when I won because this was also for the 44 slain Special Action Force troopers. I am offering this victory to them because I drew my strength from them.”

A former boss of Flormata’s, however, said the young policeman’s newfound fame has taken its toll on his duty as a member of the Philippine National Police (PNP).

Flormata, 29, was assigned to the ASG before he won the Philippine pageant last year.

“I think the problem is he has a job but he lost his focus. He would be attending to an interview or a commitment for the pageant. It has affected his job at the special reaction unit,” the official, now assigned to Camp Crame, said on Sunday.

Laxa, who said he supported his subordinate in his pursuit of the Mister International title as a way of uplifting the PNP’s image, said it might be better for Flormata and the PNP to take advantage of his international fame and assign him to the Police Community Relations Group (PCRG).

The PCRG is tasked to link up with the public and the community for the implementation of the PNP’s programs for public safety and law enforcement.

“I think he would do well there, since his new title as Mister International is just that—linking the PNP to the public. His victory is a big deal for the PNP,” Laxa said.

Flormata said he was both happy and nervous during the final ceremony. “But whenever they were calling ‘Philippines,’ I was really very thankful to God and was also happy for the honor I was giving the country,” he told the Inquirer in an e-mail from Korea.

With the aid of an interpreter during the final question-and-answer round, Flormata said his biggest disappointment in life was “not showing respect to his parents,” and proceeded to say that he regrets this because it is one of God’s 10 commandments.

During the final moments of the competition, Flormata said he prayed to God: “Whatever the results may be, thank You.”

“At that moment, I was happy. I was thinking of our compatriots. I was hearing some people in the audience yelling ‘Philippines!’ So I was hoping to make my country proud,” he said.

Flormata came in third in the national costume competition, where he wore a Dinagyang Festival-inspired costume made by a Filipino designer.

Named first runner-up in the competition was Rabdi El Zein of Lebanon. Tomas Dumbrovsky of the Czech Republic placed second, while Rafal Maslak of Poland was third and Mitja Nadizar of Slovenia, fourth.

Carlo Galang, president of Prime Events Production Philippines Foundation Inc., which organizes the local contest, said Flormata was a favorite among the Koreans. “They were inspired by him being a policeman and his being humble in spite of his success. And also, he was being himself and had fun so the people around him liked him,” Galang said.

Sought for comment, PNP spokesman Chief Supt. Generoso Cerbo said the organization had yet to release an official statement on Flormata’s victory as he extended his personal congratulations to the policeman.

“We are happy for him. It’s an honor, not only for the PNP but the whole country as well. From the officer in charge, Deputy Director General Leonardo Espina and down the line, we are all proud of his extraordinary accomplishment,” Cerbo said yesterday.

He may be given an appropriate award from the PNP for his feat, Cerbo said.

Flormata is expected to fly back to the Philippines later this week.