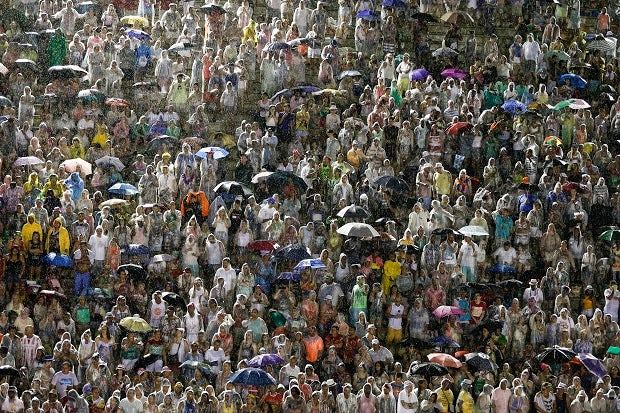 Spectators stand in plastic rain slickers and, or with umbrellas as they watch the Viradouro samba school file past in the Carnival parade at the Sambadrome in Rio de Janeiro, Brazil, Sunday, Feb. 15, 2015. The skies opened up Sunday evening, about an hour ahead of the start of the all-night-long extravaganza, drenching revelers and flooding streets near the Sambadrome. (AP Photo/Felipe Dana)

The skies opened up about an hour ahead of the start of the all-night-long extravaganza, drenching revelers, flooding streets near the Sambadrome and even the walkways within Rio’s Mecca of Carnaval.

Tennis star Rafael Nadal, in town for the Rio Open tournament, participated in the opening parade of the night, covered by a plastic rain slicker. Mobbed by the press, the Spanish athlete only stayed around 20 minutes, trying out fancy footwork meant to resemble samba and posing for selfies along with former Brazilian French Open winner Gustavo “Guga” Kuerten.

This year’s five-day-long Carnival celebrations, which also include some 450 alcohol-soaked street parties, or “blocos,” comes as a welcome respite from the recent avalanche of bad news afflicting Brazil. In addition to near-constant reminders of the stalled economy, Brazilians are coping with a snowballing corruption scandal at the state-run oil giant Petrobras as well as the worst drought in 80 years in the southeast, which includes Rio and the country’s industrial and business hub of Sao Paulo.

Carnival celebrations in smaller cities have even been cancelled because of the drought.

Sunday’s rains in Rio were, then, widely welcomed, despite interfering with the city’s biggest party.

“It hasn’t dampened the performers’ spirits, and at least it’s not so hot with the rain,” said Helio Abreu, a 53-year-old doctor taking shelter with his wife at a concession stand. “I know we need it, but to tell you the truth I really wish it had started on Ash Wednesday,” the last day of Carnival.

In Paraty, a colonial jewel of a city between Rio and Sao Paulo, Carnival was scaled down after a deadly shooting on Saturday night. One person was killed and 10 injured, including three tourists from Sao Paulo, in the shootout which erupted in the midst of a crowd of revelers in the historic downtown, according to news reports.

Six samba schools were parading in Rio’s Sambadrome on Sunday night, with each group required to get their thousands of participants and giant floats across the roughly 730 meter-long runway in under 82 minutes. Six other schools will perform on Monday, with all 12 groups vying for the title of the year’s best.

Mangueira and Salgueiro were the biggest-name samba schools parading Sunday. Last year’s champion, Unidos da Tijuca, is the last parade Monday, with the winning school announced later in the week.