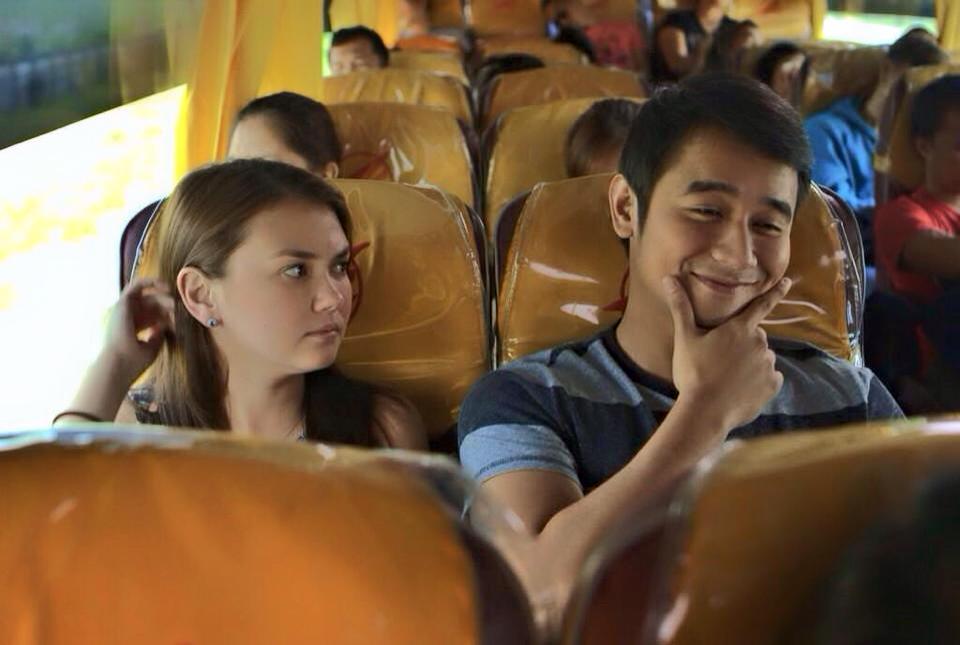 I took a picture of Will Thacker’s blue apartment door in Notting Hill, walked around Borough Market, stopped by Bridget Jones’ flat, and imagined Mark Darcy and Daniel Cleaver crashing through the window of what used to be a Greek restaurant (now a wine merchant), and boarded the “Sex and the City” bus—twice.

I joined a Muggle tour, grabbed drinks at Arlene’s Grocery because of Nick and Norah’s Infinite Playlist, pretended to be fake Bill and fake Scarlett at the “Lost in Translation” hotel, even paying for the overpriced cocktail inspired by the film.

It was this same urge—a pop culture tourist’s compulsion—that led me to look for Abi Dionisio’s paintings at the BenCab Museum in Benguet, the ones Anthony (JM De Guzman) and Mace (Angelica Panganiban) were staring at in “That Thing Called Tadhana.” The paintings were no longer there; they were part of a temporary exhibit. But that didn’t stop me from having my photo taken in front of the empty wall where the paintings had been, posting it on Instagram with this caption:

Over the next days I continued to retrace Anthony and Mace’s footsteps, eating at Café by the Ruins and walking to the end of Session Road, passing by people who were offering free hugs.

Sadly, I didn’t make it to Sagada. But you can.

The film’s poster tagline asks, “Where do broken hearts go nga ba talaga, Tita Whitney?” You can find the answer by going on a “Tadhana” tour, inspired by the Cinema One Originals film released by Star Cinema, currently enjoying box-office success after a previous limited run last November.

Gather your friends, invite a date, or go alone and keep your fingers crossed that you’ll meet your Mace or your Anthony.

Here are the stops:

The Japanese restaurant in QC is Anthony and Mace’s first stop after meeting at the airport in Italy and enduring the flight to Manila together. Over bento meals, they talk about their tattoos and Rome. Outside the restaurant, Anthony first learns about Mace’s heartbreak.

Trivia: The ringtone you hear in that scene is from the Up Dharma Down song “Tadhana.”

Grab a table by the door and order the tempura and chicken teriyaki bento sets.

Talk about tattoos if you have them. Dare your travel buddies to show you theirs. Resist the urge to chastise anyone for not answering their phone. 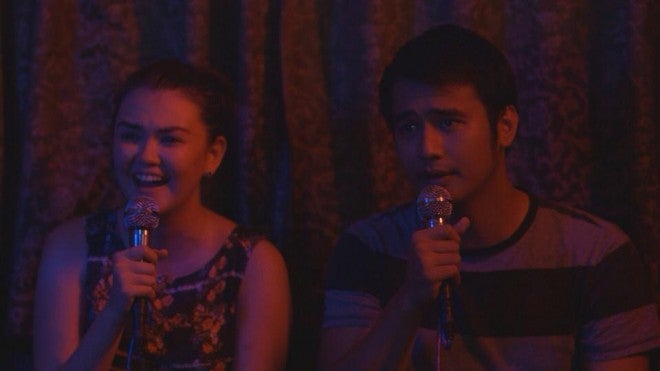 Grab the mic and sing the Whitney Houston hit “Where Do Broken Hearts Go?”

Feel the song, really feel it, because it’s important to “Tadhana” writer and director Antoinette Jadaone. She and her production team fought hard to keep the song in the film, resorting to crowdsourcing because they were over budget and the song’s foreign publishing office was charging $5,000 for its use.

“I wrote the script with that song in mind, most of the time playing it while I wrote,” she told us last November. “It’s one of my favorite songs to belt out on videoke, and it’s best sung while brokenhearted. Mace in the movie will do the same—sing her heart out, trying to get a perfect 100, while asking, ‘Where do broken hearts really go?’” 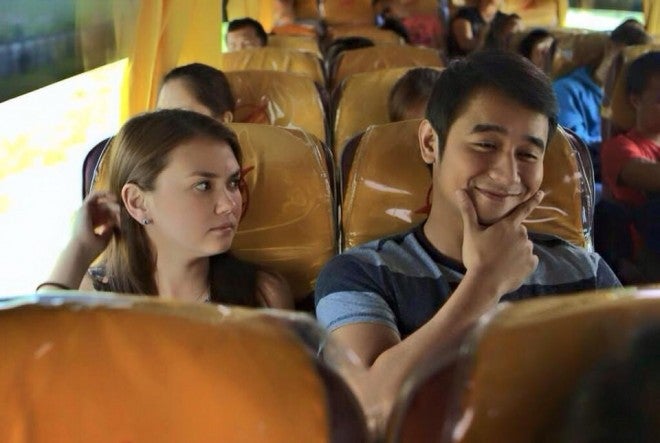 If you want to take the exact same bus that the two characters rode, look for Victory Liner Bus No. 2114. Try to get the conductor to play the Joyce Bernal movie “Don’t Give Up On Us” starring Judy Ann Santos and Piolo Pascual—which is a favorite of both Mace and Antoinette. 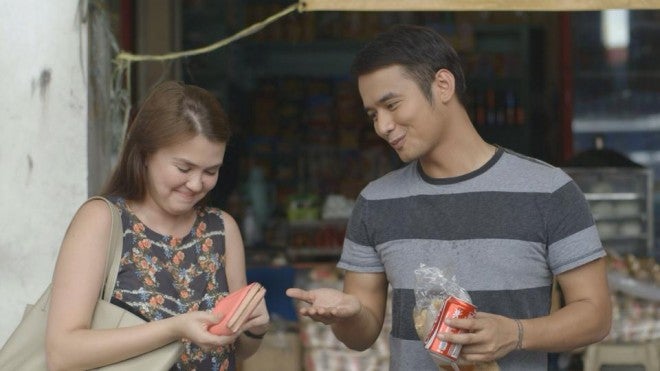 Buy spiral hotdogs and chicharon and make a bet that you might lose. Like love, travel has risks. Relish it.

Congratulations, you’ve made it to Baguio.

Carry your load—literal or metaphorical—across one of the city’s overpasses. Don’t forget to have strawberry taho at the end of it.

The paintings you saw in “Tadhana” may no longer be on display, but there is still plenty to see at National Artist BenCab’s museum.

There are galleries devoted to BenCab and other National Artists like Arturo Luz and Ang Kiukok, as well as works of contemporary artists, collections of sculptures and tribal artifacts and erotica.

And when you’ve had your fill of art, stop by Cafe Sabel, visit the duck pond, enjoy the incredible view and take a lot of pictures. You will want to.

“Aren’t we supposed to be great by this time?”—Mace

Mace and Anthony had breakfast with coffee at this Baguio hangout while discussing Mace’s short story.

Try Ernie’s Kamote bread, Suman at Tsokolate, the Cheese Lumpia Straws and our favorite, Baguio Bagnet, while talking about your dreams and moments of glory.

Bare your heart in this bar, just like Anthony did. Drink and talk about your regrets, your pain, the things you wish you did differently, the things you’ve had no choice but to accept.

Trivia: The song playing in this scene is “What’s Left of Me” by Emerzon Texon, who is also “Tadhana’s” musical scorer.

Continue the conversation outside the bar. Ask if, like Mace, you can take your drink outside. Sit on the railing if you can.

Get on Bus No. 524, if you want to ride the same bus Mace and Anthony did. Listen to Carlos Castaño’s cover of “Where Do Broken Hearts Go” which is also in the film. (It’s on SoundCloud.)

If you like your travel buddy enough, sleep on his/her shoulder.

“Can you feel the heat?”—Anthony 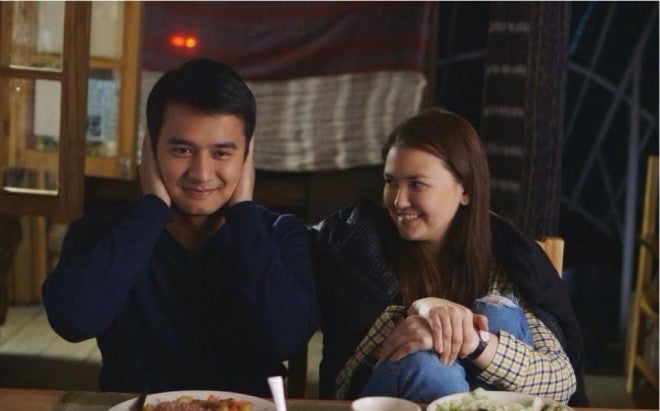 Gaia Café & Crafts was the setting for the kilig-inducing akbayan scene in “Tadhana.” Enjoy a meal and drink coffee in this vegetarian restaurant. Find creative (and sweet) ways to keep your travel buddy (or yourself) warm as you take in the view of the rice terraces.

Camp at Mt. Kiltepan and wait for sunrise. Have a good conversation, the kind you will replay in your head for days and days. Keep your fingers crossed (or wish on a shooting star) for clear skies to see the incredible sea of clouds.

Walk till the end of Session Road. Make a promise you intend to keep.