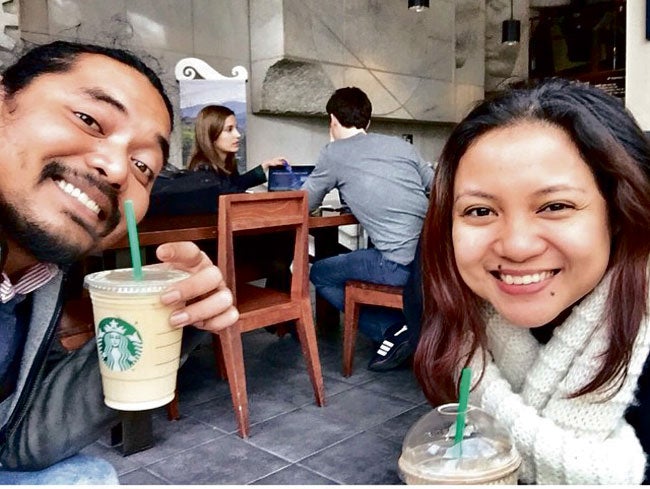 ‘I wanna hold your hand’

“Every single successful love story has those unbearable and unbearably exciting moments of hand-holding,” wrote David Levithan and Rachel Cohn in “Nick and Norah’s Infinite Playlist.”

The book—and its movie version—gets it.

Thom: “You still haven’t figured it out yet, have you?”
Nick: “What?”
Thom: “It. You know, it. The big picture.”
Nick: “I guess not.”
Thom: “The Beatles.”
Nick: “What about them?”
Thom: “This (grabs Nick’s hand). Look, other bands, they want to make it about sex or pain. But The Beatles, they had it all figured out. It’s their first [No. 1] single. It’s effing brilliant, right? ’Coz that’s what everybody wants, Nicky. They don’t want a 24-hour hump sesh, they don’t want to be married to you for a hundred years, they just wanna hold your hand.”

After an exhausting week of talk about billboards, disappearing hands, censorship and discrimination, Inquirer Super pays tribute to the simple but powerful act of hand-holding by asking couples of all kinds to tell us about the first time they held their partner’s hand.

(READ: ‘Our hands will never be erased’)

Because that’s what we want—a world where we can freely hold the hand of the person we love without fear of censure or judgment.

“The first time we held hands, pa-simple pa kami no’n ’cause we’re both in denial sa nararamdaman namin. We were just catching up after 13 years, and we didn’t want to cross the line yet. But during the movie we’re watching, we found ourselves, well, our hands, slowly inching their way toward each other.”—actor-musician Aiza Seguerra on wife, actress Liza Diño

“It was on our first date. We were watching a movie at Shangri-La Plaza. Miko tried to hold my hand, and I happily obliged. That was almost eight years ago, and we still enjoy holding each other’s hand.”—Jerald Vincent San Juan on his boyfriend, pastry chef Miko Llamanzares Aspiras

“I think it was when I first picked him up, and I was driving like crazy in Manila traffic. Maybe he thought I was tense, so while I was focused on the traffic, he slowly touched and held my hand. I don’t know why, I couldn’t care less that I was nervously sweating, I just relaxed and held his hand, too.”—Marie France Group of Companies PR manager NJ Torres on her fiance, Christophe Jacobson

“The first time I tried to hold hands with my partner, she pushed my hand away. But eventually, with persistence, I was able to hold her hand.”—R ‘n’ B singer Jay R on his girlfriend, pop-R ‘n’ B singer Mica Javier

“We hold hands all the time. But the first time he tried to hold mine, I panicked and thought things were moving too fast. So, when the time was right, he was gentle and asked… I agreed and we’ve been inseparable since!”—actress-singer Zsa Zsa Padilla on her boyfriend, architect Conrad Onglao

“It was the first day of ‘Rio 2’ when we first held hands. It was our second date, our second time seeing each other, our second week of texting and chatting, and the day before he was to fly to Bangkok for the Songkran Festival… As we watched the movie, he reached out for my hand, and I comfortably leaned on his shoulder like we were old-time lovers. Then he whispered, in the most gentlemanly tone possible, ‘Comfy?’ I was captivated. It was magic. Despite knowing each other for just a couple of weeks and despite not knowing that we will be together eventually, I felt comfortable, safe and happy. I said to myself, ‘Finally, a man who knows to make simple gestures and little moments worthwhile.’ To this day, that magic remains. The feelings of security, being loved … and being valued are all communicated blissfully as our hands meet every once in a while.”—entrepreneur Mark Villaflor on his boyfriend, DJ Nel Cruz

“Tim and I first held hands on the beach in Malibu watching the sunset. This Thursday we celebrate our 10th anniversary. Time flies!”—actress, host and producer Giselle Tongi Walters on her husband, businessman TimWalters

“The first time we held hands was in Boracay, April 2006. I remember it very well because we were lying down under the stars outside Fridays, and that was probably the closest we were beside each other. We were just chatting… Then it got a little serious… He said he had to tell me something and turned away from me ’cause he started getting shy. He used Brad Pitt and Angelina as code names and asked, ‘What if Brad wanted to tell Angelina that he loves her but couldn’t say it?’ Then I think I said, ‘Well, Angelina loves him too.’ Cliche, but we saw a shooting star after. Then he got my hand, pretended to measure it comparing to his. Then we held hands with our fingers interlocked.”—Samantha Godinez-Valenciano on her husband, musician Paolo Valenciano

“The first time Gab and I held hands, we were away in LA. We weren’t boyfriend and girlfriend yet so it was quite special. It was at that moment when he grabbed my hand and held me for the first time that I knew I was going to spend the rest of my life with him. That’s when we went from being friends to being boyfriend and girlfriend and, now, we are about to get married. It may be such a little thing, but our ‘holding hands’ changed our lives. It said so much without having to say a thing at all. Holding hands may not mean much to some couples but it means so much to us … something we will do forever.”—host Tricia Centenera on her fiance, dancer Gab Valenciano