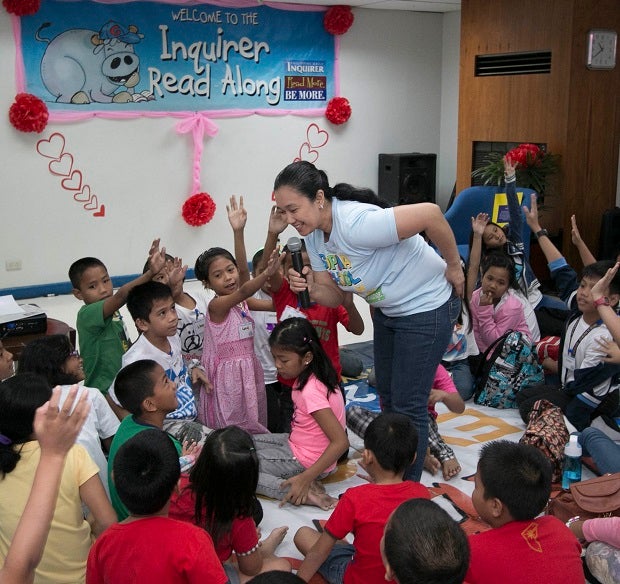 MANILA, Philippines–The reigning storytelling champion of the Inquirer Read-Along Festival, Eine Vuycankiat, recited poems for children in the recent Pasinaya 2015: Open House Festival at the Cultural Center of the Philippines (CCP) to promote poetry among the young.

Eine recited “A Tribute to Family” by Nicole O’Neil, which honors parents who shape their children into persons of strength, and “The Frog” by Karina Africa-Bolasco, a poem about seeing the beauty in people beyond the superficial.

Eine, 10, was one of the performers in Pasinaya’s Kids’ Zone held at the CCP library, where specially chosen poems were recited to help kids learn to appreciate poetry.

Regular read-along partners and storytellers Ann Abacan of Sophia School, Rich Rodriguez and Posh Develos of Ang Pinoy Storytellers also performed in Kids’ Zone, just one of the activity areas in the Pasinaya.

The children’s event, which featured only spoken poetry, was a preview of Performatura, a “performed poetry festival” set for launching in November. Performatura will feature traditional and modern forms of spoken word representative of all the regions in the country.

“We all know that oral traditions are very much a part of our country’s history … vis-à-vis the modern forms in Manila of spoken word, jams and slam poetry. We’re putting all those together in one large festival. So basically we’re bringing the printed word to life,” said Giselle Garcia, the deputy director for Performatura.

“It was good. I really like it. Suddenly I feel something that makes me happy … because I have never performed a poem in public,” said Eine, who dreams about being a public speaker or a singer someday.

She said she prepared not only for the audience but also for her parents as her performance was also her gift for them.

“I didn’t give my mom anything for Valentine’s Day, but I dedicate these poems to her and to my dad, who is abroad,” said Eine, whose father is a seaman.

A Grade 5 student of School of St. Anthony in Quezon City, Eine dedicated her win in the Read-Along Festival last November to the victims and survivors of Supertyphoon “Yolanda” in Tacloban City, her hometown.

Sophia School principal Abacan led Sophia School teachers in their spoken word presentation of Mike Bigornia’s “Si Putot,” a story about a dog that feels sad about his short tail until he meets a worm.

Sophia School started their interactive performance with storytelling before transitioning into performance poetry. The teachers also engaged the audience by teaching them hand gestures for every verse of the poem “Ang Uod” by Amado V. Hernandez, before reciting in chorus an intense rendition of “Ang Panday,” also by Hernandez.

“This (performance) was a challenge for us since we are only used to storytelling. We connected storytelling to the poems, which we simplified to a level that would be easily understood by kids by incorporating actions,” Abacan said. She said easy-to-grasp poems in Filipino were chosen to promote Philippine literature, an advocacy of their school.

Rodriguez and Develos led their team of storytellers in an onomatopoeic recital of Eugene Evasco’s “Konsierto tuwing Mayo,” during which the audience gamely participated by mimicking the sound of raindrops.

Now in its 11th year, the Pasinaya at the CCP is considered the largest multiarts festival in the country, whose aim is to promote thousands of artists and their shows that will run for the rest of the year.

Love, in other forms, subject of Inquirer Read-Along