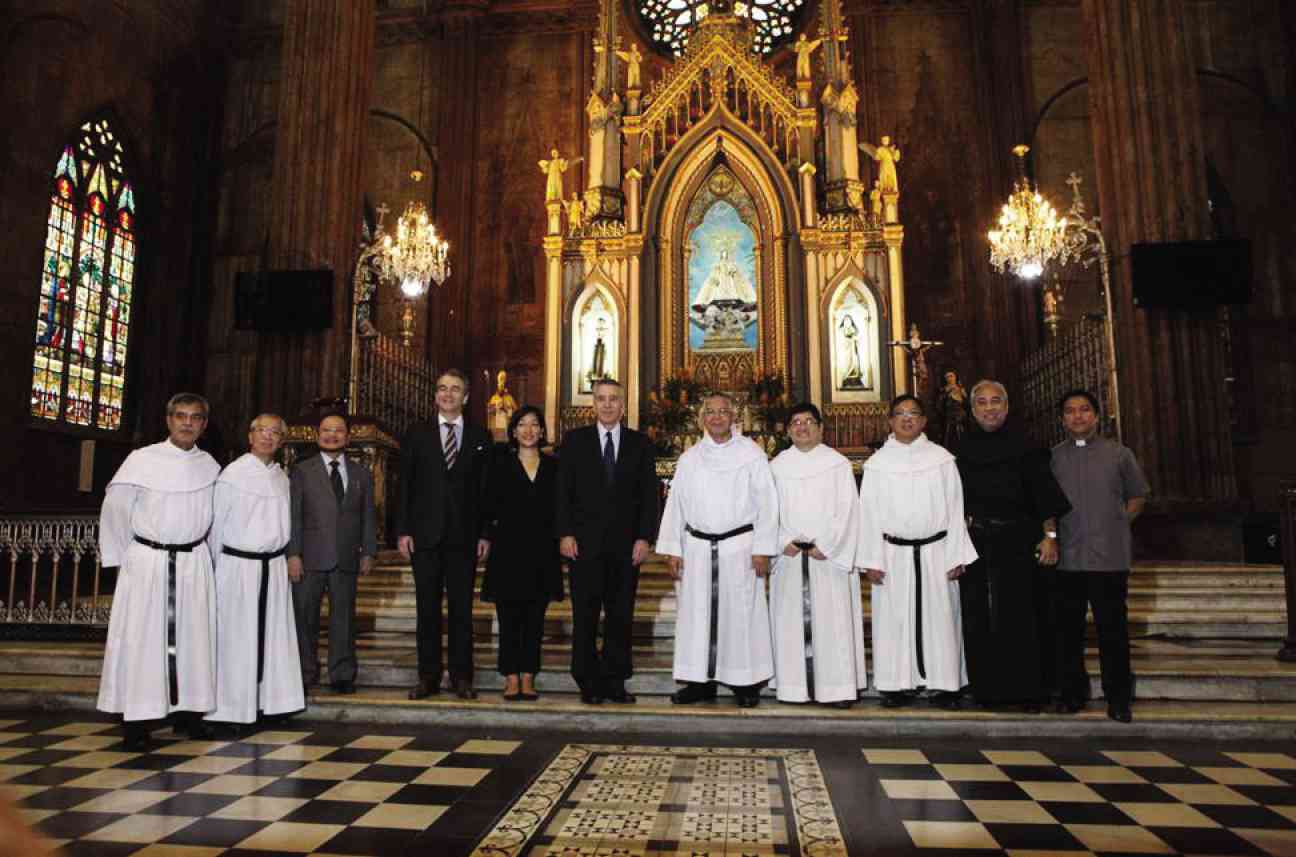 Corrosion due to 300 water leaks is eating up the San Sebastian Church in Manila, the only all-steel church in the Philippines and one of only a very few in the world.

A P4.3 million scientific study in support of the restoration and conservation of the church located in Quiapo, Manila, has concluded that the gothic structure is suffering from “heavy corrosion” as a result of “extensive and severe water infiltration,” said architect Tina Paterno, executive director of the San Sebastian Basilica Conservation and Development Foundation.

Although destroyed by the earthquake of 1880, the church under the care of the Augustinian Recollects was declared a minor basilica in 1890 by Pope Leo XIII. This was the year when the prefabricated steel sections were shipped from Europe to Manila so that the Recollects were able to erect the all-steel gothic structure, said to be the only all-steel structure in Asia. The new church was consecrated the following year.

Designed by the Spanish architect Genaro Palacios, who was supposedly inspired by the gothic cathedral of Burgos, Spain, the conceptualizing of the steel structure reportedly also had the participation of Gustav Eiffel, builder of the Eiffel Tower in Paris.

In a press conference held at the church itself, Paterno placed the cost to check the corrosion, restore the structure, and conserve its liturgical art and other appurtenances at “upwards of P100 million.”

A US$97,000 grant by the US Ambassador’s Fund for Cultural Preservation (AFCP) funded the technical study.

“As the only all-steel building in the Philippines, and one of just a handful of all-steel churches in the world, the San Sebastian Basilica in Manila, is an engineering marvel,” said US Ambassador Philip S. Goldberg.

“I am proud that the United States Embassy was able to support the first phase of the restoration of this amazing structure,” he added.

The study, according to Paterno, employed visual and techinical examination, including the use of microscopes and endoscopic cameras. It did model-testing and probed floors, walls and column cavities. It also checked with historical documents and “as-built drawings.”

Paterno said cameras dropped into the columns showed water sitting at the botton, “like a shipwreck.” She added the study consulted with international experts to determine whether there was “oil canning” or warping metal plates, early warning signs of structural failure.

“A year and a half later,” said Paterno, “we have some answers: 90 percent of surveyed columns were leaking, 40 percent had water in the base, but only five columns had massive holes in the base. Our structural engineers calculate that the five columns are now 75 percent weaker.”

But she added: “The good news is that’s only 3 percent of total columns, and the others that are in better condition compensate for the localized weaknesses. Structural cross braces in the walls are also in good condition, and those help. A few of these columns, are still in impeccable condition where they were kept dry. Our metallurgists are in deep praise of this steel and in wonder of 1890 technology.”

There are several reasons for the “extensive and severe water infiltration,” according to the study, chief of which would be the “original design” of the church: the all-steel structure was mainly built to respond to the seismic reality of Philippine archipelago, not to the tropical islands’ climactic condition of frequent typhoons and heavy monsoon rains.

The study notes that the water comes from the open exterior joints that had been sealed up with putty, a construction flaw. “Some of the corners are splaying open, and ornamental cast iron also lets water in,” the study adds.

The design flaw has been compounded by “poorly installed or incompatible repairs” in the past decades, as well as “deferred maintenance,” the study says.

“In the 1980s,” Paterno said, cement was introduced into the pinnacle valley, and the idea was good, to act like a roof to shed water. But cement’s incompatibility with metal only caused more damage: We removed the cement and discovered 3-foot wide holes in the exact imprint of the cement.”

The study shows that when the water travelled down the column, it also transferred to the wall and migrated through beams.

Although the building was so constructed to sway or move according to “natural causes” such as tremors and winds, the study also has determined that it “does not have expansion joints to accommodate that movement.”

“Even small movements from thermal expansion and strong winds in repeated cycles over 120, is enough to let some water into the joints,” said Paterno.

Paterno said there’s need to repair and restore as well the stained-glass windows.

She said Henri Oidtmann, the firm that produced the windows in 1889, is still in operation as “the oldest stained glass studio in Germany.”

“We’ve been talking to them for a year and together, we dream of their studio heading a training program to train people this long-term work,” she added.

The trompe l’oeil paintings by Lorenzo Rocha, Isabelo Tampingco and Félix Martínez are also in an advanced state of deterioration that must be arrested.

Paterno said with all the problems facing the structure, restoring it 100 percent was not achievable.

“We cannot realistically restore 100 percent of it back to its original watertight state,” she said.

“This has caused a shift in our approach to its restoration, from thinking of this as a building, whose skin we have to keep absolutely watertight, to thinking of it like a boat, which is okay with water getting in, because it’s able to dry quickly with proper ventilation and good drainage.”

“But,” Paterno emphasized, “we have to act really soon.”