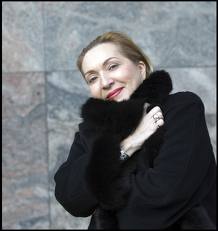 MANILA, Philippines—World-renowned soprano Nelly Miricioiu will perform in Manila on March 6 at the Meralco Theater at 8 p.m. Her program includes songs by Puccini, Verdi, Rossini, Respighi, Chausson and Chopin. She will be assisted on the piano by Najib Ismail.

She will also hold an intensive vocal workshop on bel canto singing to advance and young Filipino singers. For three consecutive days (March 9 -11) at the Ayala Museum, she will coach 12 of the country’s finest singers in the art of singing bel canto opera, specializing in the music of Bellini and Donizetti. The masterclass is open to the public. Two culminating concerts, “An Evening with Donizetti,” will be held on March 14 and “An Evening with Bellini” March 21. All will be held at the Ayala Museum at 7:30 p.m.

Hailed as a singing actress, Miricioiu is one of the most versatile artists of our day. Her repertoire extends from Mozart and bel canto to Verdi, Puccini to the verismo and modern Italian opera Respighi and Zandonai. She has also sung the works of French and Russian composers. Critics have described her as “A rare vocal phenomenon of this century” (L’Opera of France) and “This extraordinary diva can sing anything and sing it well” (Rodney Milnes of Opera, the leading opera magazine in the world).

Since her Covent Garden debut in 1982 as Nedda in I Pagliacci opposite Jon Vickers, Piero Cappuccili and Thomas Allen and her 1983 triumphant La Scala debut as Lucia di Lammermoor, Nelly has been heard in all major opera houses of the world. She has worked with some of the most prestigious conductors and directors in leading roles, including Tosca with Jose Carreras, Jose Cura and Neil Schicoff), Mimi with Placido Domingo, Violetta in La Traviata with Franco Bonisolli, Roberto Alagna, Renato Bruson, Alfredo Kraus, among many leading artists of the day.

It was in the bel canto repertoire and her dedication to rediscovering forgotten operas where Nelly found her niche. Universally acclaimed for her luscious sound, beautifully constructed technique and exceptional theatrical stage presence, Michael Davdison wrote in Opera Magazine: “The highly individual timbre of Miricioiu’s voice, her imagination and intensity, her exceptional range and sense of timing make for a unique talent.”

London became Nelly’s home. After her successful debut, she became a household name at the Royal Opera House where she has sung for over two decades in roles such as Marguerite in Faust, Antonia in Tales of Hoffmann, Valentine in Les Huguenots, Norma, Elisabetta in Roberto Devereux to name just a few. 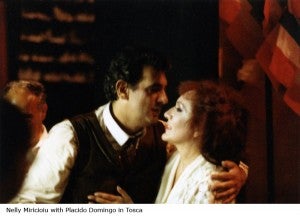 In 1996, she was entrusted with reviving the infamous Tosca production for Maria Callas. The revival was a huge success and established her as one of the best Tosca’s seen on stage. Clive Hirshon wrote in the Daily Express: “Nelly Miricioiu had the requisite passion for the title role plus a melting pianissimo that ravished the house with its purity of tone.”

The Financial Times’ Richard Fairman wrote: “Her Tosca is an artist down to her fingertips, the kind who turns every wave in a theatrical event.” She reprised her appearance as Tosca on the Royal Opera House stage in 2001 and in 2003 she enjoyed an immense success as Elisabetta in Roberto Devereux by Donizetti of which a recording was later released by Opera Rara.

George Hall of Opera News raved: “It was Miricioiu’s opera, and ultimately her evening. Hers was the longest role and the most demanding, not merely in its manifold technical difficulties but in its range of mood – suspicion, hope, love, hate, joy, pride and finally a bitter, crazed fury. All of these require expression, both in the enunciation of Cammarano’s text and in the vocalizing of Donizetti’s taxing music. Even the greatest bel canto exponents might experience mishaps over such a long ordeal, but Miricioiu’s diligent connection to words, music and meaning held out to the end in singing of outstanding consistency and command.”

Proceeds from her Manila concerts will go to Juan Antonio Lanuza endowment fund for advance vocal studies. This program aims to help Filipino young artists in the advancement of their careers through masterclasses, workshops and scholarships.