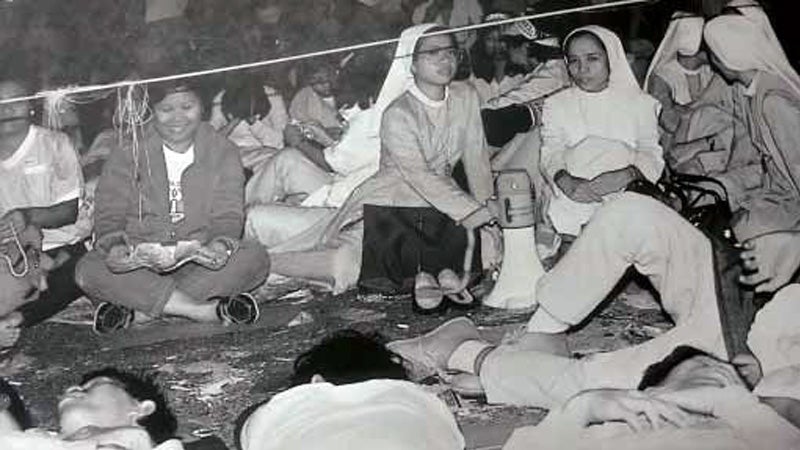 NOPICNIC Nuns and other activists keep vigil while others try to catch sleep on the hard ground surrounding Camps Aguinaldo and Crame on Edsa. PHOTOS FROM THE BOOK “PEOPLE POWER”

There were festive moments for sure, such as when a fleet of helicopters on a mission to attack Camp Crame sided with the rebels instead on Day 3, and when Cory Aquino took her oath as President at Club Filipino in Greenhills, San Juan City, on Day 4.

Otherwise the air was rife with danger and tension—people were blocking tanks on Ortigas Avenue, being dispersed by tear gas on Santolan, or dodging bullets and getting hit by gunfire near Malacañang.

But looking back, the extraordinary task of heeding Jaime Cardinal Sin’s call to go to Edsa—and to stay put, with no idea how or when the conflict would be resolved—became bearable and inspired with the sound of powerful, touching and sometimes amusing music that served as the soundtrack to an epic drama.

To recall and appreciate how certain songs captured the mood and atmosphere of those four fateful days in February, we need to go back to Aug. 21, 1983—the day former Sen. Benigno “Ninoy” Aquino Jr. returned to Manila after a three-year exile in the United States and was shot upon arrival at the airport that now bears his name.

His homecoming delegation had mobilized people to tie yellow ribbons along the route leading to the airport—a gesture that would have pleased the opposition senator since it was an apt symbol from one of his favorite songs, “Tie a Yellow Ribbon ’Round the Ole Oak Tree.”

Recorded by American pop group Dawn featuring Tony Orlando, and a worldwide hit in 1973, “Tie a Yellow Ribbon” is an upbeat song, whose final verse describes a man coming home after “three long years” in jail and being overwhelmed by his wife’s welcome.

And I can’t believe I see

A hundred yellow ribbons ’round the old oak tree…”

The song would be heard on AM station Radio Veritas during the long vigil at Edsa; a marching band would also play it at Cory Aquino’s oath-taking almost three years after her husband’s death, the happy ending to a tumultuous struggle to end the Marcos dictatorship.

It was also Veritas, the radio station of the Catholic Church, that regularly played “Onward, Christian Soldiers,” a 19th-century British hymn with a martial beat.

With words written by Sabine Baring-Gould in 1865 and music by Arthur Sullivan in 1871, the song was originally composed for school processions, but assumed a somber tone in 1941 when then British Prime Minister Winston Churchill reportedly led its singing after meeting with US President Franklin D. Roosevelt on the battleship HMS Prince of Wales. The two world leaders had been discussing the imminence of World War II.

Hearing it for the first time on Veritas as I sat alone in my bedroom only a few hours after learning that Ninoy Aquino had been shot, “Onward, Christian Soldiers” seemed to be a warning of more impending trouble.

On Day 1 of Edsa, at past 7 p.m., Veritas played the tune while then Defense Minister Juan Ponce Enrile and Armed Forces Vice Chief of Staff Lt. Gen. Fidel Ramos were in that historic press conference declaring their withdrawal of support from the Marcos regime.

There were also religious songs that nuns and priests sang late in the evening after people had prayed the rosary and tried to catch some sleep on the center island between Camps Crame and Aguinaldo.

Rewind to 1985. Ninoy Aquino’s death in August 1983 led to daily protest marches and rallies denouncing the Marcos dictatorship. A highlight of those gatherings was the soul-stirring songs that local musicians performed to keep the crowd awake and alert.

The most prominent musician of those times was folksinger Freddie Aguilar. In one particular rally at Liwasang Bonifacio, surrounded by people raising clenched fists and side by side with opposition figures Cory Aquino and former Sen. Lorenzo Tañada, and other anti-Marcos activists, Aguilar played the acoustic guitar and sang “Bayan Ko.”

Originally written in Spanish with the title “Nuestra Patria” by Filipino propagandist and revolutionary general Jose Alejandrino, “Bayan Ko” was composed for the Severino Reyes zarzuela “Walang Sugat,” and was first performed in 1902 as a protest against American colonialism.

In the wee hours of Day 3 on Edsa, Aguilar recalled singing “Bayan Ko” inside Camp Crame to boost the morale of the rebel soldiers:

It was also on Day 3, at past 6 a.m., shortly after the helicopters bearing Air Force Col. Antonio Sotelo and his men landed on Camp Crame to side with the Enrile-Ramos forces, that former TV host June Keithley —broadcasting over the intriguingly named Radyo Bandido—announced that the Marcoses had fled Malacañang. She then played a song that paraphrased the situation, “She’s Not There.”

“But it’s too late to say you’re sorry

How would I know, why should I care…”

Recorded in 1964 by the British band Zombies, the head-bobbing rock ’n’ roll tune banished my fear and anxiety after I saw a high school friend catch his breath after fleeing the Santolan side of Camp Aguinaldo, his eyes stung by a tear-gas attack. The crowd jumped with joy and I wanted to dance as Keithley echoed a message to Marcos loyalist soldiers: “You are not fighting for anything or anyone anymore!”

‘Power to the People’

At that point, a friend, who had come with me to Edsa starting Day 1, decided we could now go home since it was all over. As we walked toward Shaw Boulevard to catch a bus, Radyo Bandido—which was blaring from almost every side of the highway—started playing John Lennon and the Plastic Ono Band’s 1971 single, “Power to the People.”

As it turned out, Radyo Bandido was AM station dzRJ, which every self-respecting teenager then listened to for its rebellious rock format.

I was in high spirits while joking with my friend; we laughed at how General Ramos had dubbed the revolution “People’s Power,” stress on the letter “s,” as the song’s lyrics reverberated with the rumbling drums and Lennon’s screaming vocals:

“Say you want a revolution

We better get on right away

Well you get on your feet

And out on the street…”

Apparently news of Marcos’ departure was grossly exaggerated; it would take one more day before the Inquirer could put out its by now iconic banner story, “It’s all over; Marcos flees!”