Next to Chiz and Heart, most photographed was Gretchen B | Inquirer Lifestyle ❮ ❯ 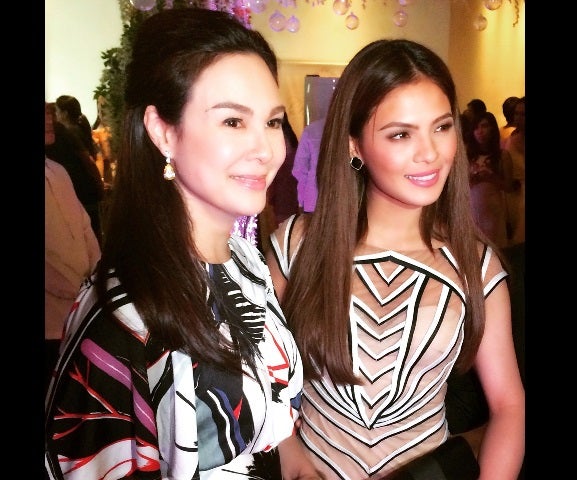 Next to Chiz and Heart, most photographed was Gretchen B

Newlyweds Sen. Francis “Chiz” Escudero and actress Heart Evangelista couldn’t contain their joy, so that they had to share it again at a second and much bigger reception Wednesday night at Blue Leaf Filipinas in Parañaque.

While the couple had 200 guests in an intimate reception that followed their resort wedding last Sunday at Balesin Island Club in Quezon province, this time their invitees in Blue Leaf added up to 1,200.

As expected, it was a marriage of politics and show biz.

Beauty doctors Z and Aivee Teo posted an Instagram picture of themselves from the reception. Basketball player Chris Tiu and Inquirer Lifestyle columnists Audrey Zubiri and Reggie Aspiras were also among the well-wishers.

One of the evening’s most photographed women, apart from Evangelista, was Barretto.

Instead of going for a different look, Evangelista requested event stylist Badang Rueda to echo the “white and dreamy” theme consisting of dangling and cascading floral and crystal arrangements he did earlier in Balesin, said an insider.

This time, Rueda had to do it on a grander scale, sprucing up a glass-panel spiral staircase where the couple made their grand entrance.

The actress looked every inch a star in a white strapless tulle number with tiered skirt covered in embroidery and lace appliqués by Los Angeles-based Filipino designer Monique Lhuillier. Indonesian Albert Kurniawan did her makeup.

Escudero, the actress’ real-life leading man, beamed with happiness as he greeted guests in a three-piece suit by Francis Libiran.

An hour or so before the couple made their grand entrance, word spread across the venue’s outdoor cocktail area that Evangelista’s parents Reynaldo and Cecilia Ongpauco were already in one of the holding rooms upstairs.

Just like in Balesin, the Ongpaucos, who once publicly disapproved of their youngest daughter’s relationship with Escudero, were no-shows. But three of Evangelista’s five siblings were at the Manila reception.

Hoping perhaps that they would show up, Evangelista again reserved two seats for her parents, as she did in Balesin.

President Aquino, Escudero’s good friend and political ally, was unable to attend the event. He was supposed to propose a toast to the couple.

In his place was Philip Escudero, the senator’s older brother and the couple’s best man in their Balesin wedding.

Mr. Aquino was at Camp Crame comforting the families of the slain SAF 44. He finished at nearly midnight, or an hour after the couple had excused themselves from guests.

Also absent was Sen. Miriam Defensor-Santiago, one of Evangelista’s dear friends, who introduced her to the then newly separated Escudero.

The senator’s earlier marriage to former singer Christine Elizabeth Flores was annulled a few years ago. They have two children, Joaquin and Ma. Cecilia.