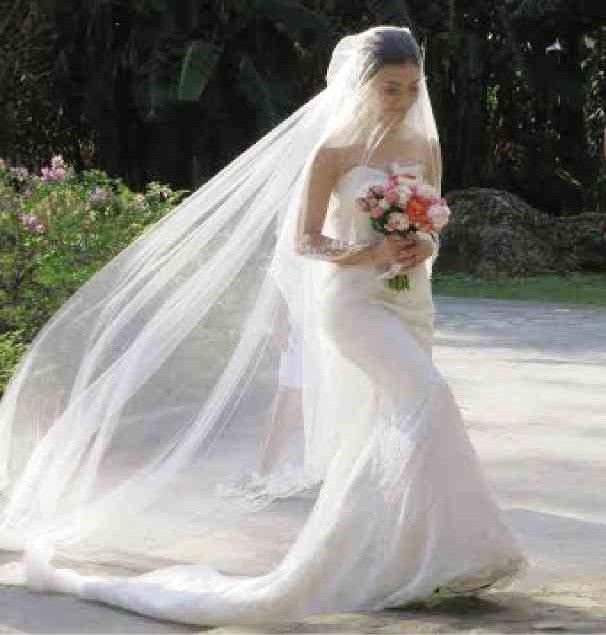 MANILA, Philippines–Balesin is known to be a breathtaking paradise, and truly worth a visit. So it was that some 100 guests invited to the Quimson-Montelibano wedding flew to this picturesque island on Jan. 10.

Tina Ordoveza-Quimson, the groom’s mother, had patiently called her close relatives and bosom friends over the Christmas holidays, reminding them many times to note and remember this important date.

Gianna, her cousin, said, “Wedding planners don’t do flight arrangements or villa bookings. Martin and Andrea, the groom and bride, did it all themselves.”

“Rina, this will be the first wedding in Balesin!” Tina told me—quite appropriate for her first-born son, Martin Quimson, whose marriage to Andrea Montelibano would cap an 11-year relationship that saw Martin establishing himself in the banking industry and Andrea finishing medical school.

On the day of the wedding, the private hangar of Alphaland was crowded with the groom’s and the bride’s family and friends—the Montinolas, Quimsons, Ordovezas, Montelibanos, and a few select buddies. Excitement was in the air as the plane took off; by the time it reached its highest altitude, all of a sudden it was time to descend.

Balesin is a mere 25-minute flight away. Your driver, after dropping you off at the hangar, would not even have reached home by the time you land.

The 500-hectare island is divided into seven themed “villages”: Bali, Toscano, Mykonos, Balesin Village, Phuket, France and Spain, with the architecture, interior decor, and even the food in the restaurants following the particular motif.

Golf carts are the mode of transport from one area to another. The facilities allow guests to indulge in numerous outdoor and indoor activities, such as water sports, archery and horseback riding, to name a few. There is a driving range, as well as a gym and spa.

It truly is a place to escape from the worries of the world and enjoy what nature has to offer in tranquility and privacy.

Excited by the many activities the island offered, many of us found ourselves rushing to get ready for the 3 p.m. wedding. With everyone calling for golf carts to get to the chapel, we must have driven the operators crazy. In honor of Martin and Andrea, everyone wanted to be seated before the ceremony.

The male entourage looked fresh in their beige linen vests and trousers. The women in their mauve gowns looked poised and elegant. I chatted with Tita Nene Tuason-Quimson, the groom’s grandmother, who told me, “You know I’m not into the beach and the sun. But I will do this for my family.” She wanted to savor every moment and bask in the happiness of family.

But where was the bride?

Suddenly, she appeared, silhouetted against the light, driven in a golf cart. Walking alone, holding her bouquet beneath the 360-degree full veil, Andrea looked radiant and serene. As she strode in, her veil got caught a couple of times on the stone pavement. We gasped with concern, but Andrea calmly fixed her veil with no effort at all, smiling at the crowd.

At that moment, I thought that this was a perfect metaphor—no matter what snags or hitches she will encounter in life, she will prevail.
As she walked up to Martin, the groom was overwhelmed by the vision of his bride and cried uncontrollably.

Officiated by Father Dacanay, who delivered a humorous yet memorable homily, the wedding was a very intimate and meaningful one.

If hosting a wedding in South Hampton boasts of the Pacific as a backdrop, Balesin is a contender for having magnificent views, too. We were hosted at the Royal Villa, where we all admired the sunset and enjoyed cocktails on the deck before moving on to dinner.

The meal prepared by the executive chef left the guests not only satisfied, but impressed and appreciative—a great ending to a beautiful day.