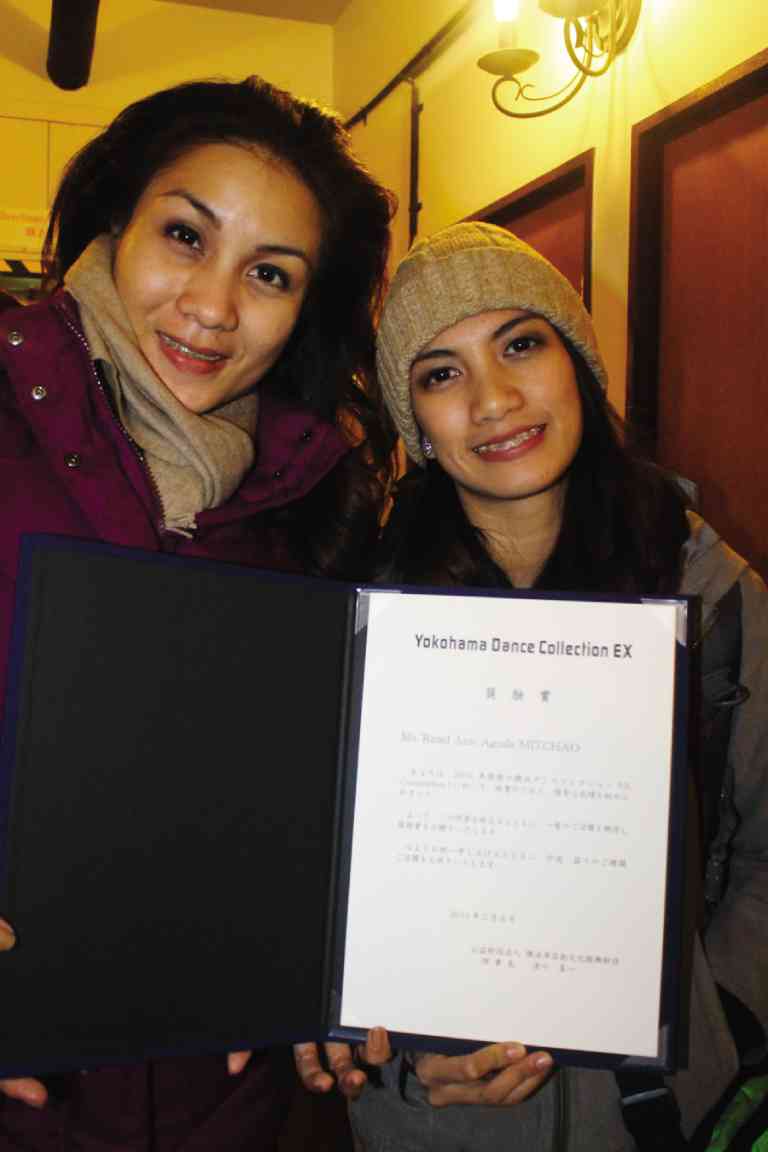 RAZEL Ann Mitchao and Akira Abao, the only foreigners to place at the Yokohoma competition, show their Encouragement Award.

When choreographer Razel Ann Mitchao showed her duet at the Yokohama Dance Collection EX 2015, the international judges dropped their jaws. How could a 24-year-old neophyte from laid-back Bacolod, Negros Occidental, produce a powerful work, executed by dancers with equally strong technique?

Mitchao’s 20-minute duet, “La Elle S’en Va (There She Goes),” which she performed with Japanese-Ilongga Akira Lydia Arrieta Abao, won second place, The Encouragement Award, in this prestigious choreographic competition. They were the only foreign participants who received a prize.

Only Mitchao’s second major work, “La Elle” was inspired by the enigmatic qualities of a woman. Set to long silence and a montage of foreign language and rhythmic tracks, the duet explores the duality of a woman’s behavior.

“It’s about how a woman perceives and approaches life and the dualities in her behavior like truth and deception, submission and assertion, strength and weaknesses, life and mortality,” said Mitchao.

In abstract shapes and moves, the dance starts in silence as bent, splayed legs are shown under the spotlight. Then a figure emerges from the darkness as if a child comes out of the womb. The dance symbolically shows the physical development from a child to a woman, her femininity and her fierceness.

Mitchao explained that the movements are vignettes from her life. The choreography is punctuated with powerful isolations of the arms, rippling torsos, flailing hair and pushes and pulls, blurs of sweeping movements spurred by momentum.

Although it comes from a viewpoint of a young woman who has yet to experience a quarter-life crisis, the dance is rife with her sociological observations of women.

Some segments from the dance piece seemed overdrawn, judges and other choreographers said they were impressed with Mitchao’s sense of purpose, fluent movement vocabulary and natural pulse for dynamics.

Mitchao described herself as a raw talent with some hip-hop background. She took formal training lessons at 17 years old with former Ballet Philippines member Dwight Rodrigazo. The latter had founded Dance Pull School of Performing Arts in Bacolod City, which teaches the Australian Conservatory of Ballet. Its Composition and Movement Analysis programs are recognized by the World Dance Alliance. The school caters to choreographers and dance teachers.

Under the school program, Mitchao’s dance technique so improved dramatically that she became a member of his company, Dance Pull Project.

“She was very tight when she first came to me. But after our training, she surprised the public with her loose limbs and her flexibility,” said Rodrigazo.

“It’s one in a hundred that you meet a dancer with that charisma and a burning passion.”

In Manila, he said, dancers attend to sidelines or commercial works at the expense of technique classes and rehearsals. In contrast, dancers in Bacolod can focus in improving their craft because there are no distractions.

“We don’t have raket (sideline) here. All we do is train and perform,” he said.

The European elements in Mitchao’s work such as the aggressive moments, unabashed femininity, title and choice of music came from Rodrigazo’s influece. He once trained in France and had performed pieces by French guest choreographers in his Ballet Philippines days.

Mitchao said she was reluctant to teach and to choreograph. However, Rodrigazo saw her potential, “he advised me that I could be a stronger dancer if I taught and made dances.”

“I took the course in composition and I fell in love with dance making,” she added. “The more I choreograph, the more I discover my inner self as woman.”