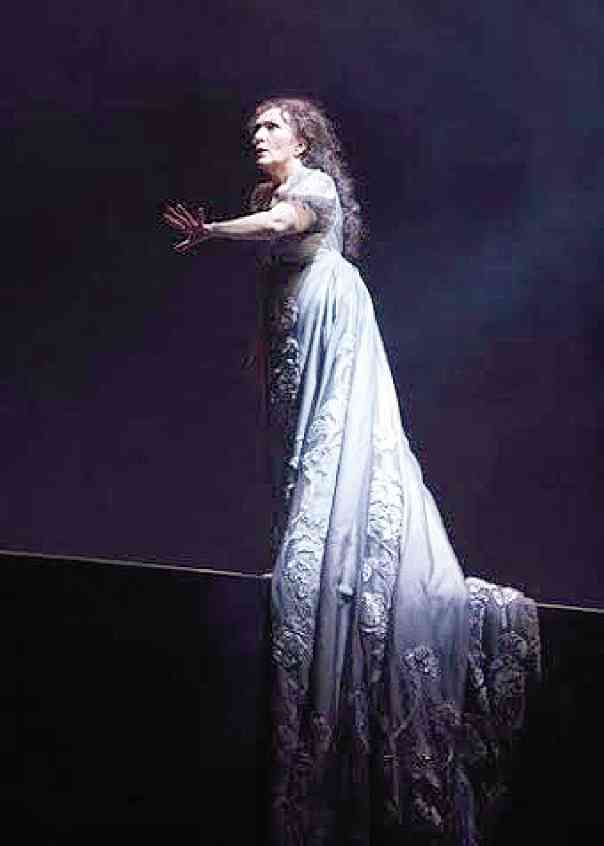 SOPRANO Nelly Miricioiu as Tosca in Covent Garden. Her Philippine return engagement will be on March 6, at Meralco Theater

Pianist Najib Ismail can very well claim he has worked with real and revered divas in the opera world.

He has not only heard and watched them; he has actually collaborated with them.

One such memorable encounter was with the great Dame Joan Sutherland, with whom he had worked in a master class in Australia.

Another would be with the mesmerizing Korean diva Sumi Jo, whom he accompanied during her Philippine debut last year.

On March 6 at Meralco Theater, Ismail will team up for the first time with the formidable Romanian diva Nelly Miricioiu.

La Sutherland was Miricioiu’s distinguished backstage visitor when she sang “Lucia di Lammermoor” in Covent Garden. When Miricioiu sang “Traviatas” at Sydney Opera House, Australian critics were quick to declare the Romanian diva “has nothing to fear from Dame Joan and Dame Kiri (Te Kanawa).”

Asked about working with the Romanian, Najib said: “I am both nervous and excited at the same time. As we all know, Ms Miricioiu is a great and wonderful artist.”

The pianist was only 13 when Miricioiu debuted at the Cultural Center of the Philippines. He was 16 when she performed at Manila Metropolitan Theater.

“Judging from the articles written about her during that time, Miricioiu simply took Manila by storm! Everybody adored her,” he said.

“I think the best way to work with any artist is to be as prepared as you can be, and also to be as flexible as possible. Because unexpected things happen before a performance, like sudden repertoire changes. There is also the matter of interpretation where one has to be very flexible as well.

“One song sung by different artists would never be the same since it has the artist’s stamp on it, and you have to contribute to its creation as well. Trying to know the repertoire as early as possible is very important as well so that you can work out the possibilities and, if ever, anticipate the changes that you would have to do.”

He has to squeeze time between practicing and teaching at University of Santo Tomas, which he finds very difficult to do.

“Sometimes you are just simply exhausted. Practicing can be a burden, and if you’re just too tired, it’s not good at all,” he said. “So you have to find time and focus.

“Ms Miricioiu’s program is beautiful and almost all of them I’ve never played, so this is a really big challenge on my part. I also found out that the key of one song was different from what I got, so I have to relearn it. One song was substituted for another, and I have to learn the new one as well. I tell myself, ‘Be still, my heart.’”

Ismail said he found most unforgettable his collaboration with Sumi Jo.

“She has always been one of my musical idols,” he said. “The first time I heard her live was in Berlin in a production of Offenbach’s ‘Tales of Hoffmann’ with our very own Andion Fernandez. The second time was in Moscow, so I never in my wildest dreams had expected to have a concert with her.”

“Her singing is so inspiring that you want to play as best as you possibly can. Plus, she is just a very nice person and a truly compassionate one, and it shows in her performances. The sincerity of her singing truly captivates you. She has none of the egotistical things we often hear about divas, and her amazing skill, is as you know, simply breathtaking.”

The rules of a good collaboration are quite simple and clear for Ismail.

“First, always be prepared,” he said. “Learn your music as best as you can. Try not to be late for rehearsals. Acquaint yourself with the repertoire. Listen to several artists. Always try to be patient, and always give 100 percent of yourself. For me the most important thing is to show sincerity. This will always be evident in any performance that you do.

“How do I make the piano sing as well? First, you should be sensitive to musical color and how a phrase is shaped. I always take note of what the singer does.

“This musical exchange between singer and pianist is very inspiring. I try and emulate as much as I could the way the human voice sounds like, and try and replicate that on the instrument the way a singer would breath. It is something a lot of instrumentalists could learn from a singer’s phrase. When you find and is able to express that color, the music becomes even more special and meaningful.”