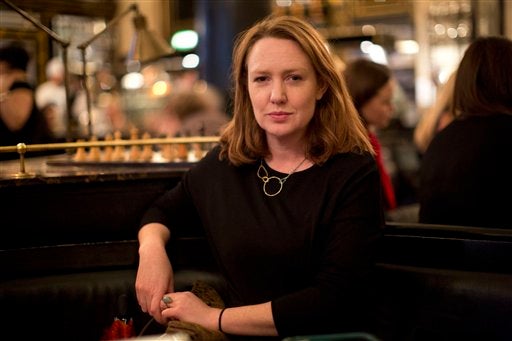 Paula Hawkins, author of "The Girl on the Train", poses for a portrait in London, Thursday, Feb. 19, 2015. The tedium of the daily commute has turned out to be pretty productive for Paula Hawkins. AP

LONDON — The tedium of the daily commute has turned out to be pretty productive for Paula Hawkins.

Journeys spent staring out railway-carriage windows inspired the former journalist’s first thriller, “The Girl on the Train,” whose title character glimpses something disturbing from a commuter express.

Published in January, it was billed as “this year’s ‘Gone Girl'” — a label that has turned out to be much more than publishers’ wishful thinking. The book has topped best-seller lists and become a book-club favorite, selling more than 750,000 copies in the US alone. DreamWorks has snapped up the movie rights.

“People keep saying, ‘Has it sunk in?’ and ‘I don’t know’ is the short answer,” Hawkins said. She’s just back from a US publicity tour and sitting in a London restaurant so upmarket that her tea is served with an elaborate pouring contraption whose operation is a bit of a puzzle.

“I’m obviously not posh enough to come here,” she said.

The 42-year-old writer says she’s still riding the first “crazy rush” of literary success. It’s a long way from the Zimbabwe-born author’s early days in London as a student and then a journalist, riding trains between homes in outlying neighborhoods and work in the city center.

Hawkins said she has always enjoyed “the odd sense of connection you get as a commuter” with the people and places you pass each day. “And then idly wondering what it would be like if you saw something shocking or sinister.”

That’s what happens to the book’s protagonist, Rachel, who is trying to numb the pain of a broken marriage with far too much alcohol.

Rachel becomes fascinated with the seemingly golden life of the couple who live in one particular house she passes. One day, she sees something shocking; soon after, the woman in the house disappears.

Rachel becomes obsessed with solving the mystery, but her blackouts and memory lapses make the truth elusive.

“Her perceptions can’t be trusted, not even by herself,” Hawkins said. “It’s a really good way of drawing people into a story, because you’re constantly having to second-guess what you’re being told.”

Readers and critics have responded enthusiastically to Hawkins’ teasing narrative. The Washington Post found the book “well written and ingeniously constructed,” while the Guardian said “the thriller scene will have to up its game if it’s to match Hawkins this year.”

But Hawkins acknowledges it was a risk. Rachel is so wayward that some may find her unsympathetic. The novel’s two other narrators — Megan, the woman seen from the train, and Anna, the new partner of Rachel’s ex — are also more troubled and complex than they first appear.

“I have a lot of sympathy for Rachel,” Hawkins said. “I thought she was compelling and I thought that she’ll be recognizable to a lot of people as someone they know who’s just slipped over the edge.”

Hawkins feels at home in a landscape of dark secrets and emotional misery — much more at home than she did in her previous guise writing lightweight romances under the pseudonym Amy Silver.

She wrote four in all, and says that as the series went on, “the books were getting darker and darker and more miserable, and more terrible things kept happening.”

“I find writing the darker side, writing tragedy, a lot easier than writing happiness,” she said. “Happiness is just less psychologically compelling, isn’t it?”

“The Girl on the Train” is written in crisp, simple prose that effectively conveys a growing sense of menace. Hawkins says the films of Alfred Hitchcock were an influence. “I love that, the slow ratcheting-up and the sense of paranoia and self-doubt.”

It’s no surprise the novel has been compared to “Gone Girl.” Both are tales of suburban psychosis with unreliable female narrators.

Hawkins says she’s a big fan of “Gone Girl” author Gillian Flynn, though she thinks the books are very different. She is pleased to be part of a crop of female authors “writing about the really dark side of relationships, marriages gone very sour.”

“I suppose they are preoccupations that play on the minds of a lot of women,” she said. “I don’t know if they do to the same degree to men.

“I am interested in the ordinary sort of threat. I know that people are interested in things like serial killers and what have you, but actually those aren’t the sort of crimes that really happen very much. The sort of crimes that happen tend to be more of a domestic nature and quite banal, but the psychology behind them is always fascinating. It’s the stories that lead you to the violence that are interesting.”