Where to go, what to enjoy–before or after the gig | Inquirer Lifestyle ❮ ❯ 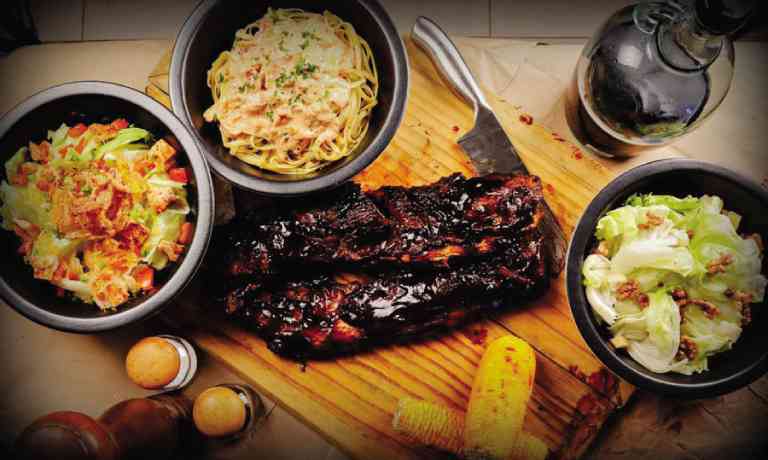 Where to go, what to enjoy–before or after the gig

It happens often enough: Traffic has caught you running late to see a concert, you haven’t had dinner, but the food sucks at the concert venue. The lesson: Leave the house or office at least four hours before showtime to allow you to eat and have a little drink somewhere, before proceeding to the gig.

In the past few weeks we’ve stumbled upon three places where the food is tasty, filling and affordable enough—for you to consider going back after the gig.

The house specialty, Smoked Soft Bone Ribs (¼ slab, P230), is not overmarinated, unlike some baby back ribs around town that end up too salty. This one has its Southern-style barbecue flavor down pat.

It’s also so tender, you don’t need a knife to slice it.

But the biggest difference is, according to owner Dino Paolo Peralta, he serves ribs with no bones at all because it’s beef brisket, imported from the United States.

Of course it goes well with San Miguel Pale Pilsen, but go easy—lest you eat and drink too much that you’ll be late for the gig.

Chicken wings are a dime a dozen around the city, but what makes Buffalo Wild Wings fly above the rest are the 15 choices of sauces and seasonings with which you can “customize” your order (a snack size of five pieces of wings goes for P295).

We like the Asian Zing (“sweet meets heat; chili pepper, soy and garlic sauce”) and Parmesan Garlic (roasted garlic and Parmesan sauce with Italian herbs); they both stimulate the appetite in a mouthwatering way.

The place, a US franchise run by the Bistro Group, has a nice concept, “wings, beer and sports.” The beer choices are extensive; we settled for a 16-ounce Stella Artois on chilled glass, just for kicks, but expensive at P235. The sports part is played by dozens of TV screens airing basketball, football, tennis, boxing and other sports programs all day till about 12 midnight.

Surely this place will be packed on May 2 because it will air the Pacquiao-Mayweather fight via satellite.

We think we’re headed to the A. Venue Mall on Makati Avenue, and sure enough it’s in the same area—except that what we see is a beer garden (how baduy naman, you might say, but that’s what an outdoor area that serves beer is called, from the German word “Biergarten”), with stalls serving grilled food, among others, operated by a group called Baga (Barbecuers and Grillers Association).

Our friend orders barbecue, squid, isaw, adidas, IUD and other street food, along with San Mig Light. It’s all an acquired taste, of course, and we limit our consumption to barbecue, squid and, for the first time, San Mig Lemon-Flavored Beer, which, at 3-percent alcohol content, suits us fine that night.

The place is rather laid-back, unlike the typical beer garden crowd during, say, Oktoberfest. In fact the people here are a cool mix of young Makati office workers, foreign tourists, couples and groups of friends.

The only catch is that there’s an Olongapo-type band playing Eagles and Deep Purple covers that has seen better days.

On hindsight, we had a good laugh deciphering the songs’ lyrics which the band’s lead singer skewered like barbecue.