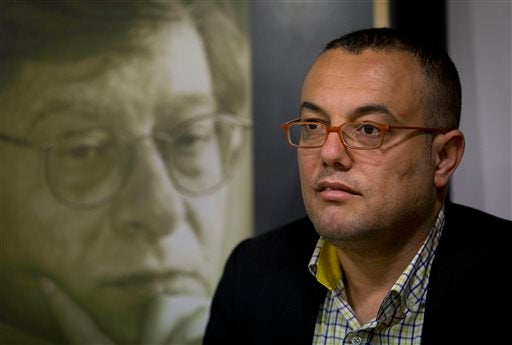 In this Sunday, March 1, 2015 photo, Palestinian novelist Atef Abu Saif sits next to a photo of late Palestinian poet and author Mahmoud Darwish, following a workshop discussing his novel, "A Suspended Life," in the West Bank city of Ramallah. Abu Saif, 41, who was shortlisted for a prestigious Arabic literature prize but couldn’t attend the ceremony because of alleged Hamas harassment says he learned story-telling from his refugee grandmother, who recounted happier times. AP

RAMALLAH, West Bank — A Gaza novelist who was shortlisted for a prestigious Arabic literature prize but couldn’t attend the announcement ceremony because of alleged Hamas harassment says he learned story-telling from his refugee grandmother, who recounted happier times.

As a boy, Atef Abu Saif began writing down his grandmother Aisheh’s stories about life as the wife of an orange merchant in the Mediterranean city of Jaffa — before she and her relatives fled during the war over Israel’s creation in 1948. She ended up in the Gaza Strip’s Jebaliya refugee camp, 70 kilometers (45 miles) to the south.

Abu Saif, 41, has continued writing since then, through two Palestinian uprisings, clashes between rival political factions and three full-fledged wars pitting the territory’s militant Hamas rulers against Israel. His most recent novel, “A Suspended Life,” tells the stories of several Jebaliya residents and their struggle to carve out normal lives amid the recurring mayhem.

“The main message is that life in Gaza is a break between wars,” Abu Saif said in a recent interview in the West Bank city of Ramallah. “This break deserves to be lived.”

The novel is one of six shortlisted for the International Prize for Arabic Fiction for 2015, an award for contemporary fiction run with the support of the Booker Prize Foundation in Britain and funded by the Abu Dhabi Tourism and Culture Authority. Widely known as the “Arabic Booker,” this year’s $50,000 prize will be awarded in May.

Abu Saif tried to leave Gaza to attend the announcement of the shortlisted works in Casablanca, Morocco, in February, but Hamas delayed his exit permit, he said.

“There was huge public pressure on Hamas and eventually, they let me go, but it was too late so I came to Ramallah,” said Abu Saif, a member of the Fatah movement of Palestinian President Mahmoud Abbas, the main political rival of Hamas. Abbas’ Palestinian Authority is based in the West Bank.

Abu Saif said Hamas has been trying to impose its own culture on Gaza.

“Freedoms retreated gradually under Hamas rule in Gaza,” he said, noting that any public lecture requires a license and that Hamas closed the only art gallery in the territory. At the same time, “Hamas produced its own writers and intellectuals, poets, singers and actors,” he said. 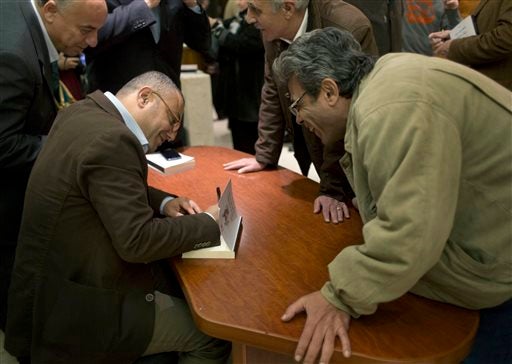 In his novel, he hints at Hamas’ grip.

It ends with the government confiscating a revered hill near Jebaliya and building a shopping mall, a mosque and a police station there, sparking protests. “The three buildings represent the tools of power for Hamas, the marriage between money, religion and politics.” he said. “This puts the government in confrontation with people.”

Mustafa Sawaf, the acting deputy minister of culture, said the Gaza government facilitates the travel of artists and writers, but that Abu Saif did not seek the ministry’s help “because he is a politician, not a man of literature.”

Sawaf said the ministry does not differentiate between artists based on their political affiliation.

Abu Saif’s life is closely intertwined with the turbulent history of Gaza.

The territory was captured by Israel in the 1967 Mideast war, along with the West Bank and east Jerusalem. In 1987, an uprising against Israeli occupation spread from Jebaliya to the rest of the Palestinian territories. In the mid-1990s, the revolt led to interim peace agreements, including the establishment of a Palestinian self-rule government.

A second, more violent, uprising erupted in 2000. Israel withdrew from Gaza unilaterally in 2005, and Hamas seized the territory two years later from Fatah. Since the Hamas takeover, Israel and Hamas have fought three wars, while Egypt and Israel have largely sealed the territory’s borders.

Abu Saif was born in Jebaliya in 1973, the oldest of 14 children squeezed into a refugee shack with a leaky roof made from corrugated metal. Open sewage ran through the alleys, and the neighborhood boys often had to retrieve their soccer balls from dirty water.

His father worked as a laborer in Israel, saving up to send his children to university. Abu Saif’s grandmother, Aisheh, told him stories about her life in Jaffa.

“The best novelist in the world was my grandmother,” he said. “She was comparing her good life in Jaffa with the miserable life in the camp,” he said.

At age 12, he started writing down what she told him.

Two years later, the first uprising erupted right outside his door, and he was drawn into the rebellion, throwing stones at Israeli soldiers like many of the teens in the camp.

He was hurt three times, once by live fire and twice by rubber coated steel pellets. In the second uprising, one of his brothers joined an armed group and was killed, he said. He declined to elaborate.

He now teaches political science at Gaza’s Al Azhar University. The father of five still lives in Jebaliya, albeit in a larger apartment.

His first two novels had political themes, while the next two were more personal. The books were only published in Gaza, and his readers were few.

He sent his fifth novel to a Jordanian publisher. Since the recognition from the prize committee, a new edition has been printed and distributed across the Arab world.

“Before the Booker, no one knew me outside of Gaza and the West Bank,” he said. “Now I’m well known in the Arab world.”