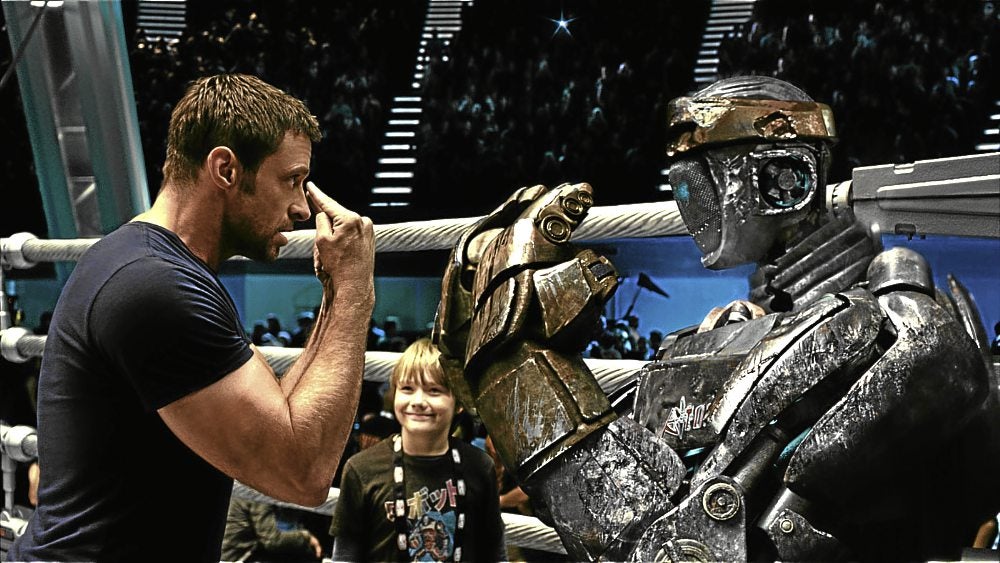 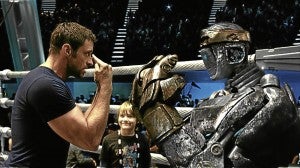 Hugh Jackman, well-known for his role as Wolverine in the “X-Men” films, retracts his claws and puts on some boxing gloves in “Real Steel,” a film adaptation of Richard Matheson’s 1956 short story “Steel.”

Despite obviously borrowing elements from other films and containing a borderline corny script, it packs some real punch, gorgeous robot designs, and intense action that can be entertaining for kids and, to a certain extent, adults as well.

At a time when robots have replaced humans in boxing, Charlie Kenton (Jackman) is a struggling former boxer who trains robot fighters and makes them fight in matches to pay off his debt to loan sharks.

After his only robot loses a match, he finds out he has a son, Max (Dakota Goyo), with his deceased ex-girlfriend. The boy’s aunt, Debra (Hope Davis) wants to adopt him.  Charlie, who cares only for the money he will get in exchange for the adoption, agrees, but he is required to take care of Max for three months.

As expected, the relationship between father and son starts a little shaky, but after Max is saved from a fall by an old, beat-down robot, Atom, in a junkyard, the two begin to bond.

Charlie is convinced by his son to train Atom for fights. With the help of his old friend, Bailey Tallet (Evangeline Lilly), he is able to restore the robot and transform it into a prime fighter.

In the end, Charlie realizes his only chance of regaining lost glory lies not just on Atom but also on his long-lost son.

Although the film is basically about big robots fighting each other for glory, it is also essentially a father-son drama and an all-too familiar tale about redemption. It capitalizes on the “Transformers” mystique—which is no surprise because Dreamworks is helmed by Steven Spielberg—but also uses elements from past boxing films.

For example, Atom is not simply an ordinary robot who beats up the bad guys in the end. In the film, much like a real human boxer, the robot is portrayed as an underdog who goes through a series of trials and fights before it puts its name on the map. So it’s no surprise if toward the end of the film we find ourselves rooting for it and connecting with it emotionally, despite it being a robot.

But there are times when the script can turn too contrived and sappy for the adult audience to take, particularly the ones involving father and son and the finale.

Thankfully, there are enough action scenes to keep us entertained. The boxing scenes between beautifully designed robots are well-choreographed and appear very realistic. It was apparently a wise move for the filmmakers to put boxing legend Sugar Ray Leonard onboard.

Also, the actors flesh out their roles well—Jackman as the irresponsible father; newcomer Goyo, who acts more like an adult than his old man and is surprisingly great in this film; and Lilly, whose brief romance with Jackman’s character seem to be misplaced. On the other hand, the villains are too cliché to be remembered.

All things considered, “Real Steel” packs enough punch to make it a formidable contender and entertainer, but it doesn’t belong to the heavyweight division yet. Perhaps we can determine if it can move up a weight class in the rumored sequel next year.