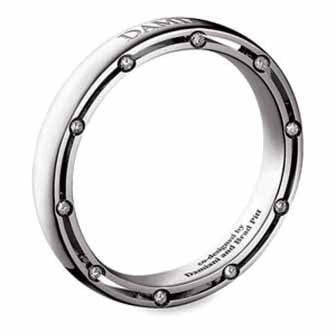 The wedding rings Brad Pitt co-designed with Damiani for his marriage to Jennifer Aniston are still a popular part of Damiani’s permanent bridal collection. The collection is now called D. Side.

Brad Pitt’s marriage to Jennifer Aniston may have been short-lived, but the rings he designed to symbolize their union live on to this day and, in fact, continue to be a best-selling line in the Italian jewelry company he created it with.

And Giorgio Grassi Damiani, chief executive and third-generation owner of the Damiani jewelry company, doesn’t mind that it’s still the A-list actor people associate the brand with most.

“It’s a good thing. Our collaborations with celebrities are very important, and we love doing that,” said Damiani on his visit to Manila two weeks ago, to launch the brand at The Silver Vault at Rustan’s, its local retail partner.

“It’s good to have very nice products and materials, but we’re also selling emotion,” he said. “People buy jewelry when they have something to celebrate—a wedding, the birth of a child, an anniversary. You are part of the life of your customer. It’s kind of a dream. When you use the right kind of celebrities, it’s also a dream for [the customer] to have that association. It’s aspirational.”

A design and architecture enthusiast, Pitt approached the Italian company to create the engagement ring he intended to give Aniston in 1999. The actor, with Damiani’s sister Silvia, came up with a stunning round brilliant-cut diamond and platinum piece, encased in a swirl of smaller diamonds. It was valued at $500,000 at the time.

When the It couple wed in 2000, Damiani also produced their wedding rings, a distinct design of two concentric bands with small diamonds in between. It was a marketing coup for Damiani, thus the longstanding name recall even for those who can’t otherwise afford the brand’s baubles.

The relationship of the Aniston-Pitts with Damiani, however, was briefly marred by a $50-million lawsuit, as the newlyweds alleged a breach in their agreement with Damiani to keep the ring design exclusive to the couple. The parties later reached a settlement, in which they agreed for Pitt to design an exclusive line of wedding bands for Damiani, and for Aniston to appear in their ads.

“The look is both modern and classic, and quite wearable,” said Damiani.

Damiani also has a line created for Italian screen legend Sophia Loren, a good family friend, and celebrities such as Gwyneth Paltrow and Isabella Rossellini have been spokespersons for the brand.

Damiani was founded by Enrico Grassi Damiani in 1924 in Valenza, northern Italy. He was a master goldsmith who created unique pieces for noble families.

In 1953, Enrico’s son, Damiano, took over the reins. He developed the brand into a globally known company. Damiano’s wife, Gabriella, would win in 1976 the first of Damiani’s 18 Diamonds International Awards, reputed to be the Oscars of the jewelry world.

Today, the three children of Damiano and Gabriella—Guido, Silvia and Giorgio—are at the helm of Damiani. The youngest, Giorgio Damiani, recently named CEO, oversees design and product development.

“As kids, we were fascinated with what our mother and father were doing,” said the CEO. “They never pushed us, but it was natural for us to join the company. After my studies I never thought of doing anything else.”

Italy remains Damiani’s biggest market, though its Asian market has been growing steadily in the last 10 years, Damiani said. It has over 80 shops globally.

“It’s easier to get awareness because people like what to hear about history, and we have a lot of history,” said Damiani.

And what a history it has, indeed.