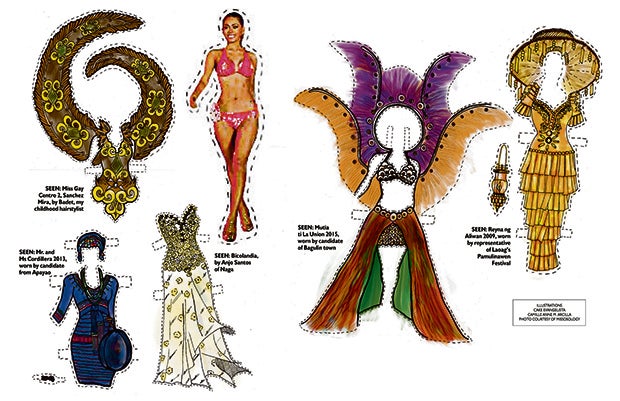 Filipinos—except those who uncovered a 1951 Swiss ad—rejoiced for the tourism catchphrase #itsmorefuninthephilippines, that talked about the varied colors of our beaches, including pink.

The hashtag broke the Internet at one point.

Because parking is more fun in the Philippines. So is popping the question. Sleepless nights. Even going upstairs, high fives and staring contests, remember?

My head can’t process the fact that an “embodiment” of our people wore a loose silver terno in Poland for Miss Supranational, ditching the all-red one that did not make waves at the nationals but was yards and yards better than this one.

Or how the heck Ina Guerrero’s national costume in the Binibining Pilipinas this year—currently vying for Best in National Costume—looks similar to but better than what MJ Lastimosa wore in Miss Universe.

How did Nancy Leonard look like a million dollars in her Muslim royalty ensemble—also vying for the award—while Bianca Guidotti managed to look only different, but far from amazing, with the same theme in Miss International?

Our paper doll project, with costumes taken from real-life pageants, found that maybe the people deciding what the international delegates have to wear aren’t searching far and wide enough.

So, you can make pala a national costume by deconstructing your walis tambo, thanks to Mutia ti La Union. In the same pageant, a girl wore a thousand-daing piece, believe it or not.

Meanwhile in Binibini, at one point, or should I say two, the costume went too literal—Carla Gay Balingit’s pineapple costume in Miss Universe 2003 that reappeared in 2005 via Precious Lara Quigaman in Miss International.

In 2013, it went too abstract, as Ariella Arida wore an unconvincing interpretation of a butterfly, just months after Super Sireyna offered fresh ideas.

Not that these were crucial in the deliberations, but they were definitely my country in a nutshell to some onlookers, or tourist arrivals lost to some Latin American country whose delegate wore a two-story costume. (Pwede!)

The competition has been fierce in the gay pageant scene. At one such event held near our home, no one was in the gym during the day. Then, in the evening, 50 were sharing the stage like beautifully decorated bump cars—all with their grand halo.

Even male pageants are killing it. Neil Perez wore a Dinagyang-inspired costume at Mister International. A delegate to a Thailand pageant wore one inspired by the “eagle that eats monkeys,” as described in the tourism ad.

In Miss Universe, Venezuela already sent sea creatures, gifts wrapped in red ribbon, and even a yellow tree. The Indonesian and Thai delegates are definitely turning out to be more fun than the Philippines, too.

Send a Kristala or Darna or Amaya, or one of the characters from Mulawin or Encantadia, please lang. Send a diwata to the contests. Go beyond the lowlands, the Spanish era.

Not another uninspired terno, utang na loob. Or maybe, if you decide to stick to it still, put a gigantic halo behind her.

Who else do you want to see as a Super paper doll? E-mail [email protected].