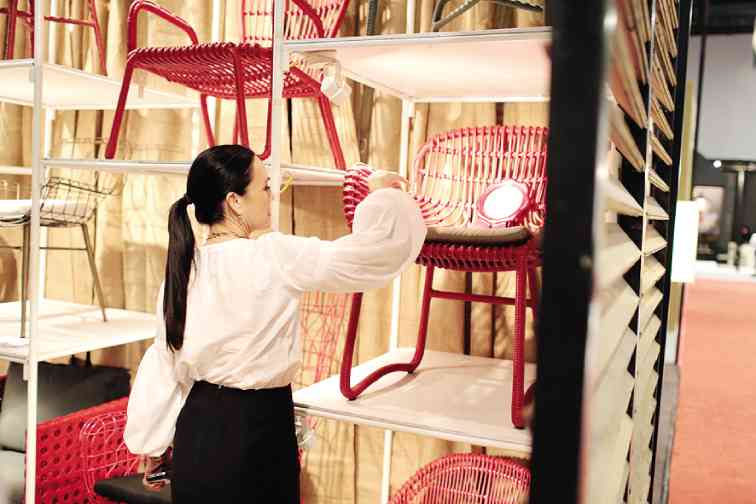 andMary McDonald choose their favorite pieces at the opening of the Philippines International Furniture Show 2015.

Seagrass on the floor is instant lift: Tips from Mary McDonald and Nathan Turner of ‘Million Dollar Decorators’

Over 200 companies have joined the Philippines International Furniture Show (PIFS) 2015, ongoing until tomorrow at the SMX Convention Center in Pasay City. The four-day event which started Friday gathers the country’s best furniture designers and manufacturers.

A highlight was the visit and talk of celebrity designers Mary McDonald and Nathan Turner of “Million Dollar Decorators,” the hit TV program on the Bravo network which aired in the United States from 2011 to 2013.

It is the first time for both to visit the Philippines, and they wasted no time going around and experiencing the country’s brand of hospitality.

“We’ve been here only 48 hours, and we are stuffed,” McDonald said. “We were told that Filipinos keep on feeding their guests, and it’s true.”

Turner, who grew up with Filipino friends in San Francisco, recalled visits to their homes, and being plied with adobo and lumpia by his friends’ mothers.

“They liked me because I never turned down their offers of food,” he said.

In between meals, the two squeezed in trips to the walled city of Intramuros, including the San Agustin Church.

“We also entered this store that was selling antiques and other items, and Nathan and I zeroed in on this beautiful abaca handwoven fabric with a lovely ikat pattern,” said McDonald.

The pair ended up buying several rolls “before anyone else got to it.” McDonald said she already had an idea how she would use it—like a runner between two slipper chairs— while Turner was considering treating the stiff fabric like upholstery.

Although their TV show ended after two seasons, the two continue to work together even if they have different design aesthetics: McDonald has a penchant for the dramatic while Turner’s style is more relaxed.

“How do I begin a project? I consider the specific needs and lifestyle of the client, and assess the bones of the home to highlight the best architectural features and to fix the flaws (whether that means a construction project like adding a fireplace, putting in new windows or raising the roof, or using paint of fabric to hide flaws),” McDonald wrote in the introduction of her book “Interiors: The Allure of Style.”

Turner knows fully well how a coat of paint can work wonders, like it did after he bought a rundown cottage in Los Angeles over a decade ago and turned it into his first store.

“Paint all the rooms a single neutral color to make them sort of disappear. It’s a great approach for any space with less than ideal finishes,” he wrote in his book “Nathan Turner’s American Style: Classic Design and Effortless Entertaining.”

When it comes to furniture, he and McDonald agree that a well-made chest of drawers is a piece of furniture worth investing in if one wants to update their living room, dining room or bedroom.

“Then I put seagrass on the floor, my never-fail trick for giving a space an instant lift in the elegance department without spending a ton of money,” Turner said in his book.

“We are delighted to welcome Mary McDonald and Nathan Turner as our special guests. They are considered to be among today’s most sought after tastemakers. They are already interested in our products, and we’re certain that they will be blown away by the caliber of new design found in Philippine-made furniture at this year’s show,” he said.

At PIFS 2015, visitors are sure to pick up dozens of design ideas they can use or tweak to update their homes or offices. Overseas buyers from 70 countries including the United States, Japan, Australia, Hong Kong, Germany, Brazil, Saudi Arabia, Turkey and India are expected to attend.

This is notable considering that the furniture show was launched only last year and has the distinction of being the only event organized by the industry itself, for the industry.

“PIFS is the ultimate Filipino Collection. It is where we show the world, and our colleagues at home, how we interpret the latest industry trends, and in many cases, take the lead in design innovation,” Christina Gaston, overall event chair, said in a statement.