Jumping from the city into the volcano | Inquirer Lifestyle ❮ ❯ 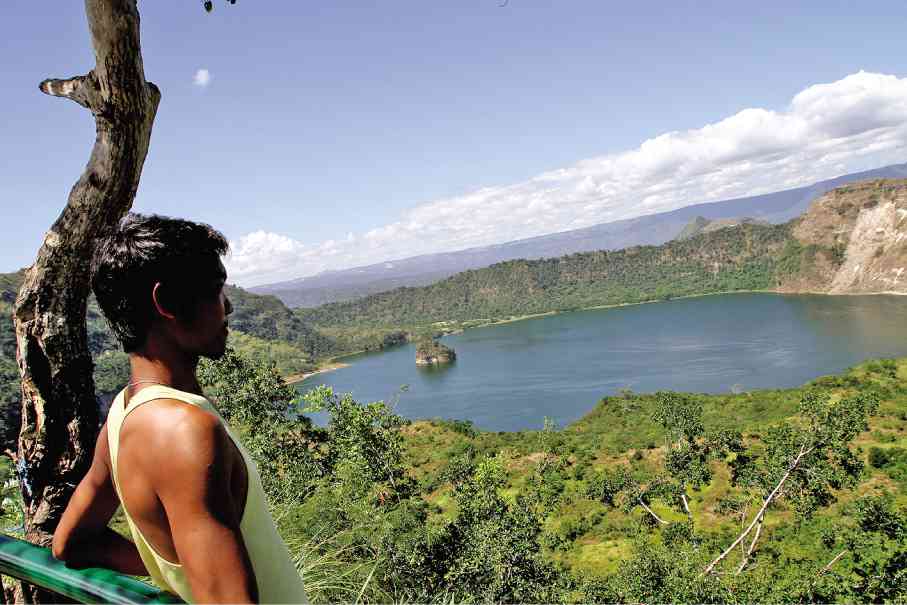 MAIN crater of Taal Volcano, unseen by the rest of the world

Jumping from the city into the volcano

Not many people have seen the real Taal Volcano. That iconic image viewed from Tagaytay Ridge is only one of three major craters (a fourth has been espied underwater). So when they say Taal is the smallest volcano in the world, do they mean this crater?

We didn’t find this out until we recently went to Lipa City in southern Batangas, 1½-hours’ drive from Manila. It had been about a decade since we last visited the place, thus we were disoriented by the new infrastructures, the bustling traffic, the gleaming buildings.

This used to be the home of the Batangueño ilustrado, who were supported by the coffee industry. Visitors can still appreciate their Hispanic houses dotting the streets, remnants or intact.

But visitors have still a lot to explore and discover in this heartland of Tagalog culture. Lipa and its environs, for instance, are a complete package—a hotspot steeped in history and culture, nature and religion.

Less than an hour’s drive from the city proper is the Taal Lake Conservation Center run by Pusod Foundation, a nonprofit organization, in partnership with the municipality of Mataasnakahoy.

The lake looks so placid, as there are no more fishpens on this part since Gov. Vilma Santos-Recto started banning them.

Looming on the horizon is Taal Volcano, the country’s second most active (33 recorded eruptions since 1572; the latest in 1977). It is a complex volcano in the lakeshore towns of Talisay and San Nicolas, right in the heart of a protected landscape of over 65,000 hectares in 13 towns and three cities (Lipa and Tanauan in Batangas; Tagaytay in Cavite).

Before embarking across the lake into the mouth of the volcano, visitors are given a full briefing on the Taal Volcano Protected Landscape (declared 1996) by environmental lawyer Ipat Luna, who’s quite articulate as she explains the biology and archaeology of the lake region and the eruption history of the volcano.

It was from this briefing we learned Lipa was originally a lakeshore town, until the whole populace evacuated and settled on higher grounds during one of those volcanic eruptions.

What we know as Taal Lake is a giant caldera (25-30 km) formed by eruptions millennia ago. Volcano Island (5 km), containing the main crater (2 km), has nearly 50 overlapping cones and craters. This can’t be seen from Tagaytay Ridge, where people only see the picturesque cinder cone called Binitiang Malaki.

The origins of the tawilis (freshwater herring) and the maliputo (freshwater jack) had always been a mystery to us until we learned from the briefing that Taal Lake used to be connected to Balayan Bay. The volcano’s most destructive eruption in 1754, lasting 200 days, had narrowed down that long arm of the sea into what is now Pansipit River, thus trapping the saltwater tamban (Indian sardine) and talakitok (banded cavalla, or trevally) in what became a lake—until through centuries of precipitation and desalination they evolved into those much-prized freshwater species, now endangered from overfishing.

After a 30-minute boat ride from Barrio Kinalaglagan in Mataasnakahoy town, you arrive on Volcano Island on the Calauit, Balete, side—the side of the lake opposite Tagaytay.

It is a high-risk area, declared a Permanent Danger Zone (PDZ) by the Philippine Institute of Volcanology and Seismology (Phivolcs). Though permanent settlement here is prohibited, the place is inhabited by a few families that subsist on fishing, growing crops, guiding tourists.

It takes about an hour’s trek upward on a 1.2-km foot trail before you get a glimpse of the crater lake. Guides on horseback follow, waiting for you to crumple in exhaustion so they can take you to the brink. Then you espy the emerald water, dotted with a little landmass called Vulcan Point.

On the slope brew mud spots and mud geysers that can be seen through the sparse vegetation. Descent is prohibited as the ground is thought to have toxic gas emanations, though some islanders sneak down to gather cogon grass to sell for thatching.

In Barrio Talaga in Tanauan City, 7 km from downtown, is the Apolinario Mabini Shrine and Museum, dedicated to the political philosopher and architect of the Philippine Revolution, aka the Sublime Paralytic.

It is a white monolithic building cleaved by two pylons, designed by National Artist Juan Nakpil and built on July 23, 1956. Beside it is a replica of the bamboo-and-nipa house where Mabini was born.

The museum had been restored, renovated and expanded in recent years, but still hewing closely to Nakpil’s original design—the futuristic-inspired 1950s modernist architecture. The two-story structure still looks very modern today, streamlined in both exteriors and interiors, and easy to navigate. It reopened on July 23 last year, on Mabini’s 150th birth anniversary.

The building holds seven galleries, offices and a library. The centerpieces on the lobby are two stained-glass murals illustrating Mabini’s life and times, strategically installed so that it turns visually ravishing at daytime.

Visitors are guided around by Derrick Villa, who’s been with the National Historical Commission of the Philippines (NHCP) for 16 years. He used to be a tour guide at José Rizal’s ancestral house in Calamba, Laguna, and at the Rizal Shrine in Fort Santiago, Manila, until he was assigned here in 2012.

It is a highly fascinating visual chronicle tracing a parallel history of the country and biography of the hero, from the time before he was born, through the Propaganda Movement, the Revolution against Spain, to the Filipino-American War, till his death from cholera at 38.

As intro, in the first gallery is shown a pithy, child-friendly, seven-minute animation of the hero’s life—a project of the NHCP, well executed by Red Root Artists Cooperative.

The family name has been assured of longevity as Mabini had seven brothers. On this part of Tanauan alone, he has about 200 grandchildren, says Arnel Talagsad, 49, an employee at Tanauan’s health center.

Talagsad’s maternal grandfather was Mabini’s brother Alejandro. He has the familiar oblong facial structure. He is teasingly called Bayani (hero) by friends and acquaintances. He used to play Mabini in school pageants and town presentations; now it’s his son who’s called on to play the role.

The museum has three regular tour guides. Villa says they host 15-20 buses of visitors thrice a week, mostly high-school students, followed by elementary, then college; and 130-200 walk-in visitors a week.

Shrine and Church of Padre Pio of Pietrelcina

In Barrio San Pedro in Sto. Tomas town (Batangas’ boundary with Laguna), 30 minutes drive from Alabang, Muntinlupa City, is a pilgrimage site dedicated to Padre Pio, the Capuchin friar renowned for his stigmata and power of bilocation.

It is a nature-friendly complex conceptualized and designed by Fr. Joselin Gonda, with architect Julius Raña and structural engineer Jaime Cancio. The area is surrounded by Mounts Makiling, Malarayat, Maculot and Tagaytay Ridge.

Flanking the entranceway to the shrine are heroic figures of Padre Pio and Mary Our Lady Of Grace, patroness of his chapel in Italy.

Done in Tropical Filipino architecture, the church was built in 2010 on a 1.8-hectare lot donated by the Gonzaga and Malvar-Villegas families. It was dedicated three years later.

It is surrounded by 14 heroic figures of saints (nine barangay patrons, five popular saints), at eight to 10 feet. Along its perimeter are the tableaux of four to seven-foot concrete statues in the Stations of the Cross.

The sprawling church is chiefly of fiberglass, concrete, sawali (woven split-bamboo matting), with steel beams painted to look like bamboo poles. The roofing has a giant salakot (native hat) motif of fiberglass applied with cement paint. It is topped by a 20-foot statue of Mary, Mother of God, Help of Christians.

Most of the furniture is made of antique hardwoods. The altar area is chiefly of yakal, with a solid block of mahogany for altar; narra trunk for lectern; and altar chairs of yakal and mulawin salvaged from ancestral houses and derelict ships.

The congregation has gemilina benches, with pews for the sick and the elderly. Unlike in other churches, one cannot find a gold object here.

A central image, hanging from the cupola, is the Glorious Cross of the Archdiocese of Lipa, a rotary icon incorporating back-to-back the Sagrada Familia and the Holy Trinity (God the Father holding up the Crucified Christ with the Dove).

At the back of the sacristy is the Adoration Chapel, notable for a 10-ft high fiberglass Christ behind the tabernacle.

The belfry, a separate structure of five levels, is of a Fil-Hispanic design, with concrete floor finish looking like traviesa (hardwood plank used for crossbeam or brace of railway track). This must be the widest belfry in the country. It is called the Sanctuary of the Relic of the Holy Cross.

On top are three bells from Belgium (costing P3.8 million). The upper levels have been turned into a mini museum tracing Padre Pio’s life, including photographs, sketches, paintings.

On the first level is the Chapel of Relic and Holy and Living Water, an octagon sanctuary patterned after Magellan’s Cross in Cebu. It contains a spring in an enclosure; and a reliquary of Padre Pio’s dried blood and what is said to be a tiny chip of the Holy Cross. Father Gonda says this is the most visited spot in the shrine.

To be constructed are a giant water tank, restrooms for pilgrims and a multipurpose hall. Under construction, beside the church, is the St. John Marie Vianney Chapel of Reconciliation, containing 14 confessional rooms.

In 2009, this church was only a chapel of pawid (nipa thatch), averaging 300 Sunday Mass churchgoers, says Father Gonda. Now churchgoers reach as high as 20,000 on a Sunday, so that the shrine has to hold four Masses.

The shrine has grown so big in less than two years that they have had to employ 25 people as landscape artists, cleaners, gardeners, cooks, salesladies (for mementos and religious items).

Last year they applied for the status of a national shrine. Father Gonda says they’re still waiting, as it could take two to five years. It still has to be observed if there’s enough devotion here, and if it is strictly following liturgical and canonical laws and the arts and culture of the Church.

Dotting the place are 10 Padre Pio statues, ranging from four to six feet in height. Posted around are his portraits and quotes, such as, “Lord, I leave my past to Your mercy; my present to Your love; and my future to Your providence.”

Most famous of all is his advice on the practical application of theology: “Pray. Hope. Don’t worry.”

While Batangueños are feared for wielding the balisong (switchblade), they are also a deeply religious, deeply romantic people.

They can be as argumentative as their duplo and karagatan, but theirs is also the home of the pasyon, the awit, the balitao and the kundiman.