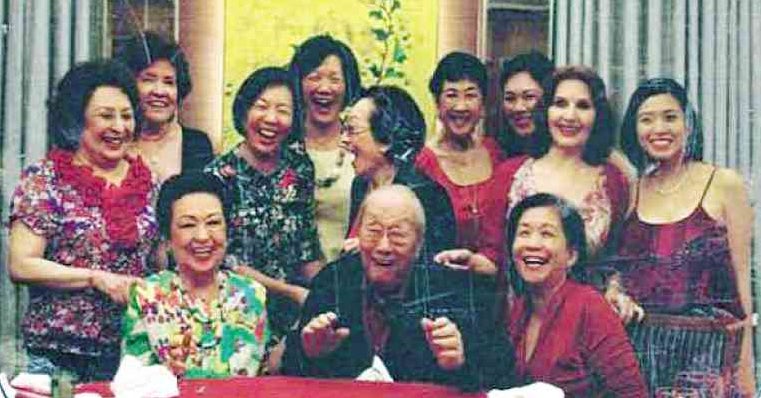 PLON his 95th birthday surrounded by loved ones

This is the eulogy delivered by the author on March 6 at Santuario de San Antonio, Makati City, at the funeral of her father, PL Lim, one of the titans of Philippine business and industry.

On behalf of our beloved Madeleine, my sister Margaret, my brothers David and Philip, our spouses, the 12 grandchildren and seven great-grandchildren of Patricio Luis (PL) Lim, I wish to extend our heartfelt thanks to everyone for joining us to console with our family. We also thank the many who came to the wake, who sent flowers, Mass cards, condolences, prayers and contributions to the Hero Foundation.

Our father lived for almost a century.

Born in May 1915, he was less than three months away from 100 years, an accomplishment that only one percent of people reach, and his mother lived to 104.

The best word to describe our father is “amazing.”

However, more than one word is needed—he was “really” or “incredibly” amazing. Allow me to reflect on why.

PL lived very close to 100 years. That’s really amazing. And with PL gone, it marks the end of an era for a generation of his friends.

In his nearly 100 years, our father’s journey in life took him from its beginning in a small village on the coast of South China to Manila, and today to its end here at San Antonio Church in Makati.

PL’s mother brought him at the age of 3 from Amoy, across what we now call the West Philippine Sea, to Masbate, where the family had a small retail and cattle-feeding business.

Pa was the third son. Because his two older brothers had died in infancy, his mother consulted a monk who told her she could not have sons.

When PL was born, she dressed him in baby-girl clothes, pierced his ears and grew his hair long for several years to ward off bad spirits.

When Pa was old enough to speak, he called her “auntie” rather than “mother.” Well, the charm worked, at least until last Monday, when our father died peacefully at St. Luke’s, where he was confined in his final fight with pneumonia.

Young PL left Masbate for Manila before World War II, but he never forgot his humble roots there in a village on the coast.

Over a decade ago, the family returned to Fujian when my brother David and cousin Willie restored the ancestral home.

From a provinciano he became, several decades after the war, well-known as one of the country’s industrialists, creating a group of companies and jobs for thousands of Filipinos.

Among them were Utex, Capital Garments, Philippine Carpet, Peggy Mills, Filsyn, and his crowning business success, the Peninsula Hotel Manila, in partnership with the Kadoorie family of Hong Kong and Shanghai Hotels LTD.

Our father was an amazing networker. He seemed to know everybody. He attended innumerable cocktails and dinner parties and knew the clubs and discos. And not just in Manila, but also in Hong Kong, Taipei, Bangkok, Tokyo, San Francisco, New York and London.

He joined countless business delegations abroad to promote the Philippines and brought foreign investors in, as partners. He met presidents, kings and queens, and even Pope John Paul.

PL was an amazingly good-looking man and a fashionable dresser. He paid attention to grooming, sometimes taking 20 minutes to comb his hair. I’m not kidding. Just ask Madeleine. And he paid the same attention to “grooming” the Peninsula.

He was a really amazing dancer, very smooth on his feet. This made him popular with the ladies and a godsend to the men at parties.

PL backed many causes—a newspaper, an economic newsletter, and his favorite, the Hero Foundation, which supports the orphaned children of fallen soldiers.

PL was NOT an amazing golfer, but he loved the sport and took memberships in several clubs. He always tried to walk the full 18 holes, and he loved the camaraderie of the “mafia” group of golfers after the game.

Webster’s definition of camaraderie is “a feeling of good friendship among the people in a group.” His group epitomized this.

He served as president of Manila Golf, his favorite watering hole, and the golfers assembled monthly with their spouses for a jovial dinner party.

They were known as the delicadeza group, and while the precise origin of the name is obscure, they have become legendary at the Manila Golf Club.

Of course, family was always an important part of our dad’s amazing life.

Until last Monday we were 28, but today we count 27 members. Like many Filipino families, our family is scattered between the Philippines and North America, with one son in Vancouver and grandchildren in San Francisco, Los Angeles, New York and Boston, almost all of whom have flown in to be here.

Today, we all recall his love for us as we express our love for him.

It seems that everyone has a story to tell about PL—even ones from 60 or 70 years ago—that have been shared with us during the wake.

You told us about a conversation you had with him, or a gift he sent, some kind words, a job he found for you or a relative or friend, some trip you took together, some meal you shared, and a golf or dancing story.

Our many visitors these last three days have shared enough tales about him to fill a book. We were very touched to hear your affirmations of how he affected so many lives for the better.

This warmth—indeed, love—from all of you has eased our feelings of loss and will always be greatly cherished by our family.

Everyone has been asking what our father’s secret to his long life was. The answer is not a secret, but is equally amazing. Madeleine.

The secret of his long life is Madeleine.

For over 40 years, she has been constantly by his side through thick and thin. She was the truest love of his life and has been a god-send for our family; and for her, the best years of her life will always be the ones with him.

Finally, but hardly last in importance, we wish to acknowledge the support of several persons, especially the caregivers at home: Bebing, Edna, Joanna, Linda, Jigs, Kenneth, Angel, Rodney, Ray and Jayne. His doctors, Marian Suarez and Marvin Basco. The Peninsula staff who assisted and who give the hotel its reputation for the highest standards of service. And also the priests who said Masses on short notice.

We are grateful to all of them, as we are to everyone else.

As I conclude, please remember that people die only when the people who remember them die.

PL, Pa, we love, honor, remember and miss you.