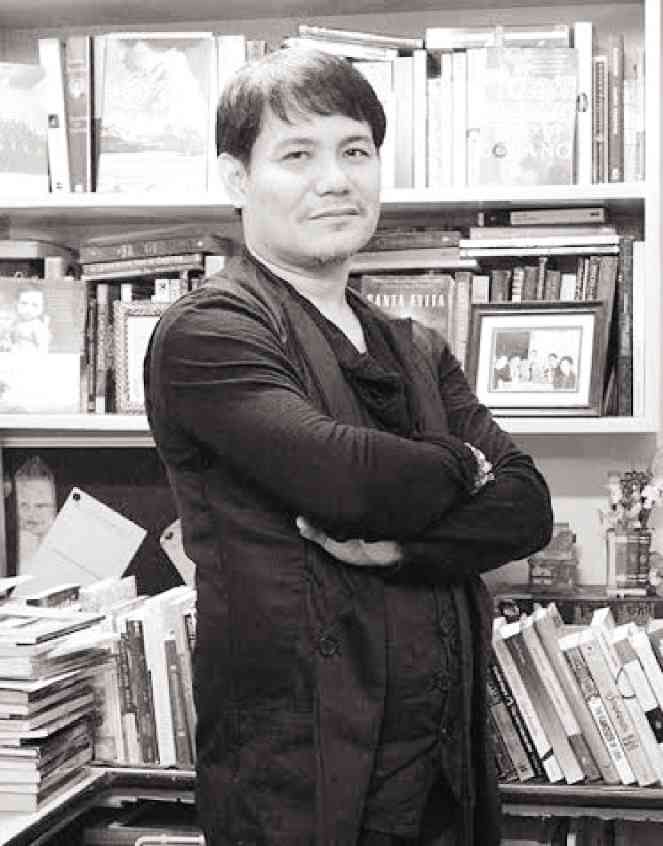 Poetic adventure through the tarot

MANILA, Philippines—Following the successful release of his second book Discernments (Manila: UST Publishing House, 2013), a collection of literary and cultural essays, and book reviews, poet-critic Ralph Semino Galán returns to his first love with the publication of a new poetry collection, “From the Major Arcana” (Manila: UST Publishing House, 2014).

Illustrated by top contemporary artist Wilfredo Offemaria Jr., compendium is composed of 24 poems, each an intersemiotic translation inspired by the Tarot “with opening and closing verses, titled “A Reading” and “The Last Card” respectively, which provide the entire collection with a narrative arc, as well as some sense of structural coherence, albeit ironically an open-ended one.”

Although Galán maintains his customary formal control in terms of structure (all the poems in the collection are consistently written in six tercets), and his accessibility as an author who believes in poetry’s return to clarity, what is perhaps more noteworthy in “Major Arcana” is the poet’s way of mimicking the voice of the oracle who speaks (or rather sings) the truth in verbal spurts, and its many attempts at inventiveness.

What sets Galán’s collection apart from the others is its polyphony. It is not only the poet’s voice that makes itself heard within the poems, but also the voices of the characters within the cards. The collection, therefore, can be read (or rather, heard) as a dialogue between the poet as oracle and all-seeing eye (in poems such as “The Reading” and “The Last Card”), the reader as the receiver of good or ill-fated fortune, and the cards as the bearer of their own stories (like in “Hermit,” “Hanged Man,” “Death,” et. al.). This polyphony contributes to the performative value of the suite, giving each poem the ability to transcend the limitations of the page.

As any true poet should, Galán remains true to his vocation in searching for ways to see the world through fresh eyes. In this particular collection, he demonstrates this through his performance of the Poet as Hanged Man, who sees the world upside down, from a different perspective, and strives to articulate these novel visions. In “Hanged Man,” which is arguably the strongest and most symbolic poem in the entire suite, as it illustrates the most important of the collection’s attempts—to bestow upon the Tarot a new meaning—the poet expresses and embraces his queerness and the strangeness of his gift best through the last tercet which reads: “You must confess my Straight One,/ the world from my perspective/ you have not seen from where you stand.//”

Majority of the poems perform themselves in the “upside-down” fashion as the Hanged Man does, starting out in one way and ending with their own surprising twists. The poem “Magician,” for example, begins with the persona’s seemingly fond remembrance of his beloved, and ends with the acknowledgement that love is an illusion, as well as the need to transform “pain into poetry/ suffering into song,” if one is to survive.

In the poem “Lovers” Galan attempts to queer the Tarot, and offers a thought-provoking take on the story of Creation and Oneness. The poem, which is based on the imagery of the Gay Tarot, presents an alternative cosmogony myth: “In the Gay Tarot, roughly based/ on Plato’s notion of the twin flames/ of creation, man’s soul-mate// is not essentially woman: the aftermath/ of which is the decaying legacy/ of flesh and blood, the family, the clan.// Same-sex love thus is neither/ sickness nor sin, but a return to another/ form of Oneness: Adam and Steve.//”

The poems “Hermit” and “Devil” give voice to two downtrodden characters, the former lamenting the lost pulchritude of his youth, and the latter the harsh predicament of being much maligned. The Horned One ends his ranting by reminding those who denigrate him of their most grievous mistake: “Remember, you had a choice in God’s Paradise—/ You picked and ate the wrong fruit; knowledge/ you chose, you must not pin the blame on me.//”

Another interesting quality that the poems possess is the interweaving of the ancient tradition of the Tarot and popular culture, which allow the collection to remain relevant in the current era.

Galán makes many cultural references from various forms of media such as film and literature, as well as events from recent history (making mention of The Two Towers, the film adaptation J.R.R. Tolkien’s second book in the “The Lord of the Rings” series, and the collapse of the World Trade Center in the poem “Tower”); the current situation in our pageant-crazy country in the poem “World;” National Artist for the Visual Arts J. Elizalde Navarro’s painting, “Is this Philippine Justice?” in the poem “Justice;” and the juxtaposition of Carl Orff’s cantata Carmina Burana and the game show The Price is Right in the poem “Wheel of Fortune.”

Indeed, Galán’s latest book provides a mystifying adventure every reader must embark on. It is one that offers infinite possibilities, and perhaps even a chance at self-discovery and rediscovery with every reshuffling. One only needs to open himself to the unfolding of his or her own destiny, and trust in the wisdom of the oracle!