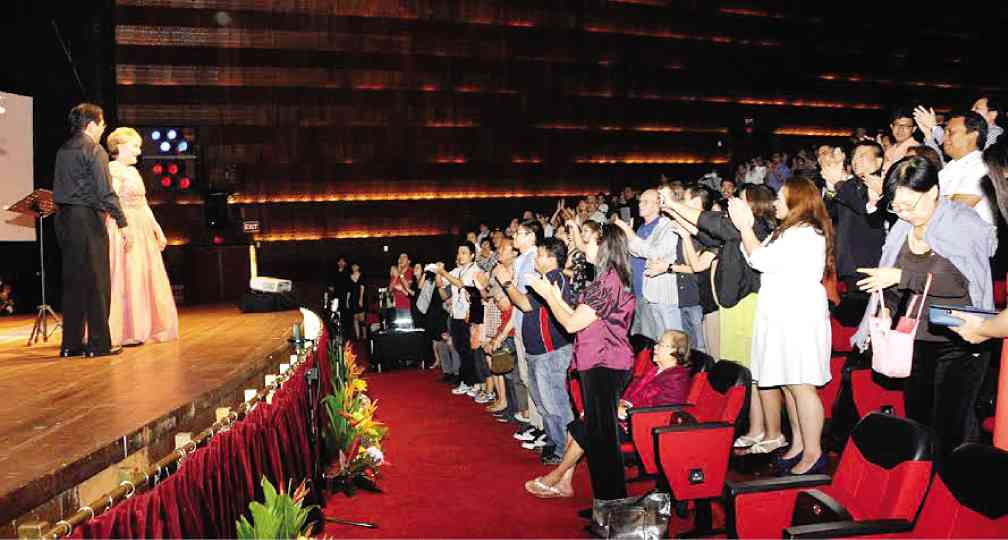 MANILA, Philippines—The March 6 concert of Romanian soprano Nelly Miricioiu at the Meralco Theater earned every possible gesture of admiration from an impassioned crowd after she performed carefully chosen pieces, which obviously represent the facets of her versatility and artistic range, from bel canto to Verdi and the modern Italian and French repertoire.

Her Respighi was an attentive reading of the composer’s eclecticism, bringing to that pastiche-induced, Respighian sound-world a generous amount of her charm and grace. Her understanding of Respighian phraseology and mélange was evident in the a piacere enunciations in “Stornellatrice,” the sentimental élan of European salons and drawing rooms evoked in “Invito alla danza,” and the impressionistic aspirations of “Pioggia.”

Pianist Najib Ismail’s playing is the quintessential model for restrained musicality. The controlled intensity that pervaded much of his performance with Miricioiu was admirable in many ways. The variety of his timbral gestures was marked with a fine, rigorous pedal technique and an imaginative arsenal of tone production.

A sense of natural refinement made Miricioiu’s rendition of the selection from Chausson quite noteworthy, from the early “Les papillons” to the more mature “Le colibri” and “Le temps de lilas.” The coloristic definitions were varied and interesting, and the pacing dramatically proportioned. The Chopin-Viardot songs were mostly elegantly phrased except for a few rhythmic excursions that sometimes felt a tad too tentative for whatever degree of freedom these pieces already allow.

Her Verdi, Rossini and Bellini showcased her dramatic facility, which has always been her strongest suit. Her voice nuanced the emotional depth of the pieces that reminded one why she is more than just a singer. Her middle register maintains a formidable richness of tone, but the high notes can get too strident and precarious in full voice.

For the most part, the concert was an intensification of what people who knew and heard her performances during her prime might have hoped she still has. Her mezza voce is as focused and arresting as ever; the proper realization of the appoggio, even now, manifesting within that vocal register. The pianissimos were elegantly executed, and her phrasing well thought-out and expressive. Her vocal dynamics and magnanimous presence are lateral extensions of her capabilities as an actress.

However, in voce piena, her voice already has the tendency to sound harsh and forced, and her runs decidedly less articulate. She might have also been pushing too hard, overcompensating for the lack of an ideal acoustical environment. We were offered a glimpse of the trademarks of her bel canto training and experience. And naturally, on such occasions, it would be difficult to distinguish what you are hearing from what you would remember.