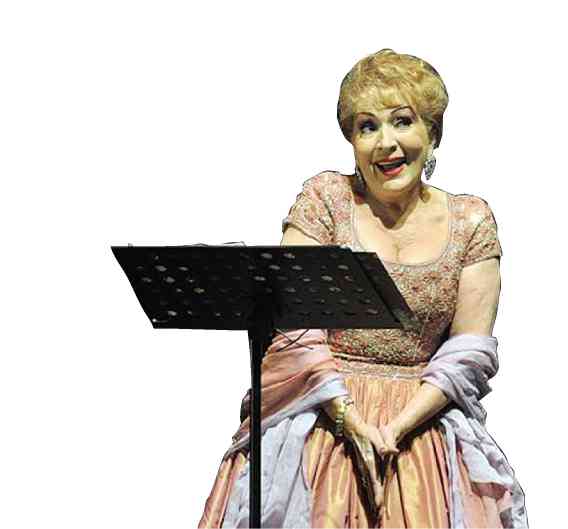 Three decades ago at the Manila Metropolitan Theater, Nelly Miricioiu took Manila by storm in an unforgettable recital where she disclosed her divine vocal prowess and magnetic stage presence.

At the Meralco Theater last March 6, La Miricioiu had Manila music lovers again in the palm of her hand.

A certified diva and a household name in the operatic world, Miricioiu has essayed lead roles in the best opera houses in Europe and the United States, and has cut several best-selling classical recordings.

For us who witnessed both her Metropolitan debut and her Meralco comeback,  the experience was more instructive than nostalgic. She convincingly demonstrated that excellent vocal technique ensures a lasting singing career. Truly the vocal instrument, when properly honed and taken care of, lasts like wine, becoming full and mellow when aged.

Considering her credentials, one was hardly surprised when the souvenir program revealed a full vocal recital consisting of art songs, operatic arias and Philippine songs. Beyond this, the diva capably rendered another operatic aria and a Philippine love song as encores, with the same resplendence with which she essayed the previous songs.

La Miricioiu cut a patrician presence on the stage.  She dished out poetic magnificence in the rendition of a bouquet of art songs culled from the works of Respighi, Chausson, Brediceanu and Chopin that are rarely heard on Manila’s vocal concert stage.

The intensity of tone expressed with appropriate facial expression and adequate body movement painted the essence of the songs.

Exquisitely, she intoned the haunting solitude in Chausson’s  “Le temps de lilas”; the lilting gaiety of Chopin’s “Coquette”; or the folksy gaiety of the contemporary Romanian composer Brediceanu.

In the arias, she was simply astounding. She stunned the audience with the finesse with which she etched the difficult runs of “Bel raggio” from Rossini’s opera “Semiramide.” Phrasing was full, and her vocal passage was well oiled in all registers!

Against the poor acoustics of the theater  (thank goodness the curtains were closed, otherwise her voice would have been sucked out by the big space behind her), her voice towered and remained brilliantly projected throughout. In the previous Verdi arias, she revealed a well-rounded and velvety tone.

On the piano, Najib Ismail played attentively. He remained cool making out the best tones from a loose, unresponding piano. Rapport was tight, and the collaboration was warmly forged.

In “Vissi d’arte” from Puccini’s opera  “Tosca,” which Miricioiu encored, her voice’s luster still ravished, considering that by this time she had already rendered the songs lined up in the program plus another Philippine encore, “Ay, Kalisud,” immortalized by the late National Artist for Music Jovita Fuentes.

Her reservoir of prowess was simply fantastic. She had shown perfect command of her vocal prowess that allowed the dynamic fusion of the full, dramatic tones and the light but bodied runs and trills to ravish the listener.

Such power had allowed her to commute from light coloratura to full lyric roles all done in the Callas mold with marvelous results.

The beauty of it is that at past 60 years old, her vocal instrument still reigns supreme. She continues to sing gloriously enabling her listeners to be lifted up in transports of joy.

The concert was held for the benefit the Juan Antonio Lanuza Endowment Fund for Advance Vocal Studies. The Cultural Arts Organizer presented it in partnership with the Coyiuto Foundation and the Manila Chamber Orchestra Foundation.