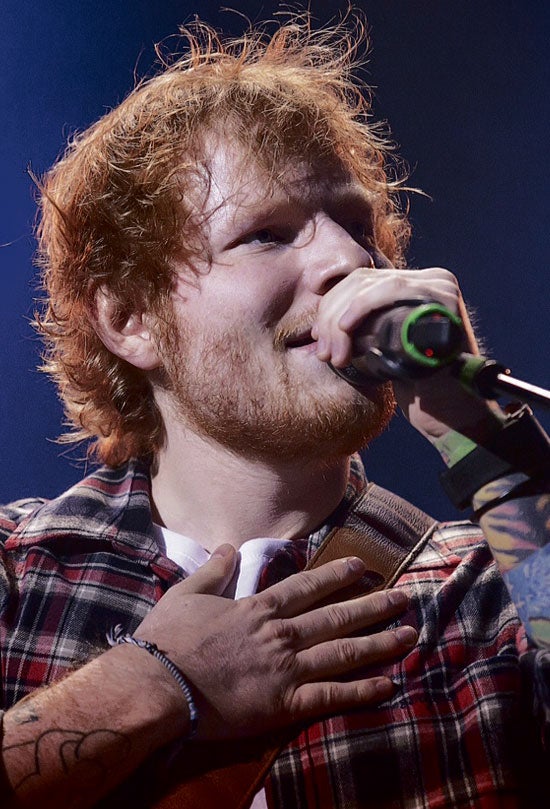 With all the hoopla and anticipation surrounding his recent maiden trip to Manila, some folks couldn’t help but wonder: What is it about Ed Sheeran that drives Filipinos crazy? Why is this ginger-haired 24-year-old musician so popular?

We’re all familiar with his modest beginnings as a struggling singer-songwriter and how he caught the attention of Jamie Foxx, Elton John and, later on, Taylor Swift—all who have helped propel him into mainstream consciousness.

During the last few months, this side of the globe quickly caught on to the Ed Sheeran fever, with tickets to his March 12 show at the SM Mall of Asia Arena selling out just hours after their release.

Filipino Sheerios stalked him online, waited for him at the airport, skulked outside his hotel, and did just about anything to catch a mere glimpse of the global pop phenomenon. The concert venue itself was an entirely different matter altogether, with screaming, crying fans crammed in every conceivable nook and cranny of the arena.

And, after the nearly two hour-long concert, critics and concert-goers alike had nothing but heaping praise for the guy.

To say that Sheeran’s first Manila concert was a smashing success would be a gross understatement.

Having had the privilege to see him work his magic live, we’ve attributed it to six compelling factors:

1. His simple setup. He had no backup band or singers; all the stage contained were two microphone stands, loop pedals, a guitar, and his smiling face against a six-panel LED backdrop that flashed pop-art visuals and video clips.

We were initially worried about how the digitized, multilayer pop arrangements of tracks from his wildly popular sophomore album “x” would translate onstage with just an acoustic setup.

But thanks to his deft multitasking skills, he was able to recreate the many elements and sounds with some loop samples while belting out his hits. That’s a genuine one-man band, if there ever was one.

But thanks to his deft multitasking skills, he was able to recreate the many elements and  sounds with some loop samples while belting out his hits. That’s a genuine one-man band, if there ever was one.

2. His heartfelt sincerity. Try as you might to resist the full force of Sheeran’s sweetly entreating brand of blue-eyed soul, there’s only one solution: Don’t.

Not that you could, anyway, especially when he’s singing his heart out in plaid shirt, jeans and sneakers.

From the folksy acoustic tunes of “+” singles “The A Team” and “Lego House” to the frenetic pacing of the “x” album’s “Bloodstream,”  it’s nearly impossible to ignore the raw earnestness in his songs that could wring emotions from a rock. When he jumped on a  speaker during the haunting half of “Give Me Love,” he asked each half of the audience to harmonize for his backup. “Give me love,” he sang plaintively, and his adoring crowd happily obliged.

Sheeran also never failed to express his appreciation for the overwhelming love and support he’s been getting from the moment he landed at the airport, or how it’s turning out to be one of the best shows he’s ever put on.

We even saw him quickly taking a photo of the audience with his phone before the final song, which he posted on his Instagram account (@teddysphotos) right after the concert for his 3.1 million followers to see.

Just recently, he told the Singaporean press that his Manila show was the most memorable  one so far. According to Yahoo Singapore, “batsh-t crazy” and “amazing” were just some of the words he used to describe his first visit to the Philippines, and that the crowd was “electric” and gave him “such a buzz.” Yup, we believe the feeling is wholly mutual.

3. His mashups. We absolutely loved how he incorporated well-loved pop and jazz classics into his own songs, like his funky snippet of Blackstreet’s “No Diggity” and Chris Brown’s “Loyal” woven between “x” tracks “Don’t” and “Nina”; “Take It Back” with Stevie Wonder’s “Superstition”; his fusion of Nina Simone’s “Feeling Good” into the intro of “The Hobbit: The Desolation of Smaug” soundtrack “I See Fire”; and “You Need Me, I Don’t Need You” with ad-lib from 50 Cent’s “In Da Club” and Iggy Azalea’s “Fancy.”

4. His mass effect. Whether rapping verses in rapid-fire succession in his heavy British accent or simply standing there smiling from ear to ear, Sheeran easily had the crowd eating out of the palm of his hand. Naturally, when he said, “Hold your phones up in the air,” the entire arena was instantly bathed in “the light of a thousand stars,” as was the case during the dreamy ballads “Photograph,” the surprise setlist addition “All of the Stars” from “The Fault in Our Stars” movie soundtrack, “Kiss Me/Tenerife Sea,” “The A Team” and, of course, “Thinking Out Loud.” Heck, he could’ve asked the crowd to do cartwheels and they would’ve happily obliged. Which sets up the next point:

5. His brilliant exit strategy. After sweetly asking the crowd to put their hands up and “Sing” for the finale (and to keep doing that), the cheeky pop star nimbly ducked out the venue before the singing fans co uld gather their wits and cause a stalking stampede.

By the time the audience snapped out of its trance, he was already safely en route to the hotel. And this, ladies and gentlemen, is how you thwart a mob.

6. His sheer talent. What we love the most about Sheeran and the global pop phenomenon that he’s become is that he’s living proof that one doesn’t necessarily need washboard abs or chiseled good looks to touch lives with one’s music. The humble, unassuming musician with the unruly ginger hair and goofy grin has broken the pop-star mold—something today’s fickle generation has learned to embrace, and hopefully also something that would pave the way for “underdog” artists across the globe.

Thank you for the surreal experience, Ed. Manila loves you, too.