Hand craftsmanship has been Wynn Wynn Ong’s doctrine. A former educator who gained prominence with her fastidious hand-wrought jewelry, she has now included furniture pieces in her artistic output, the exploration of form and medium taking her from jewelry to objets d’art.

Her latest exhibit at AC+632 in Greenbelt 5, which opens Oct. 27, aims to show the link between them. Its title, “Within,” mirrors the introspective quality of her creative process and, consequently, her works. Ong reveals that at midlife, she has been reflecting on her life and work. She’s been very clear about her roles as a family person and as an artist.

Ong’s style merges classical jewelry-making methods and modern craftsmanship with renewable and sculptural materials. Hand-wrought metal coated with 24-carat gold and techniques, such as repoussé and lost wax, lend a timeless appeal to her objects. The creations embrace a romance with the past with modern ease.

“Endangered materials are made from sustainable elements,” she says. Metal is manipulated to simulate the roughness of wood; coral branches are made from resin; ivory is a result of buffed beef shank. It was her prowess doing jewelry materials that led her to experiment with furniture pieces. 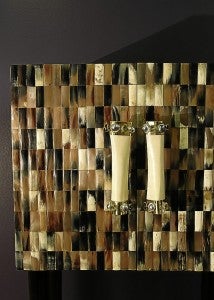 The playfulness and narratives in her jewelry are also found in her home accessories such as the cabinets, rendered in whimsical inverted pyramid shapes. A Philippine ebony cabinet is dotted with geckoes made of metal with 24-carat gold, looking as if they were chasing each other. As an element of surprise, a bejeweled lizard is crawling inside a drawer. A Buddhist, Ong believes the sounds of geckoes are auspicious. “They are harbingers of good spirits, the guardians.”

Philippine birds embellish another cabinet of the same tapered shape. The knobs are made of resin polished to look like agate. A tiny bird is perched on top, watching the other fellows. “Not all birds of the same feather flock together,” says Ong.

Piles of lowly tahong or green-lipped mussel shells were saved from being discarded. They were cut into tiles and laid into mosaic patterns on a cabinet.

“The whole point is to use the most mundane objects into art,” says Ong. She points to the bone shanks, usually served in bulalo. They were buffed to perfection to simulate ivory and transformed into handles of a carabao-bone cabinet.

A woven pandan mat covers a giant tray, attached with faux deer handles made from hand-painted resin. Walking canes, used by patients recovering from knee surgery, are made of ebony, with clever animal holders such as an eagle and frog made of sculpted silver.

“I want to be remembered as someone who refused to compromise on any aspect of the craft, as someone who elevated the jeweled form into art. Jewelry is not limited to what is worn on the human form. It is limitless in its applications. Just as a hand can extend to hold an object, a bracelet or cuff can extend toward a gem-studded walking stick or a cabinet with sculpted bird of silver and gold. I decided to broaden the craft toward ordinary objects in our daily life—cabinets, candlesticks, bars, boxes, chests and even chairs,” she explains.

Her piece de resistance is Advent Tree, a thicket of three small trees with tiny hidden compartments that store Philippine animals. A mongrel, called Bantay, is the mascot.

“I grew up in Vienna, Austria, where Christmas was magical.  There were special fairs before December where sugared grapes and caramelized apples were sold. Saint Nicolas chocolate molds were sold beside ginger-and-nutmeg cookies,” recalls Ong.

Advent Trees were inspired by the Advent calendar, a large rectangular card with 12 or 24 windows representing one for each day of December leading to Christmas. Opened daily in Advent, each window discloses an image, a poem or small gifts. Ong imbues her Advent trees with exquisite pieces of jewelry hidden in tiny apertures. Her obra is accompanied by a children’s story.

“There are 12 hidden doors in the trees and each door is home to a jeweled animal so that by Christmas Eve, there would be 12 jeweled charms on the combined trees together with 36 glass prisms,” says Ong.

“The tree is a masterpiece of hand-fabricated parts, from the tiny hinges to the hammered candleholders and 24k gilded silver numbers. Each door opens to a tiny scroll with pen-and-ink drawing of the animal in the tail, so that the child who opens that door will know which animal will be hung that night. We used recycled and recyclable materials, and left only a tiny carbon footprint, as it is done entirely by hand.”

The trees took more than 11 weeks, six of which were spent sculpting the trees and animals in high-grade jeweler’s wax.

“It took another week to cut them back into 29 different pieces so that they would fit into the casting flasks, etch serial numbers into them so we could keep track of each part, then sprue and cast them. It took another two and a half weeks to reassemble and make sure each limb matched its other parts and, finally, the remaining 12 days were spent setting gems in the various animals, and create doors and numbers. We don’t keep production molds because I intend each piece to be unique. We use the ancient lost wax technique in casting, wherein the wax sculpture is replaced by molten metal—be it gold, silver or brass. The trees are only 14 inches high, but they look exactly how real ancient trees in fairy tales should.”

The work is not just magical. Years from now, it will be of museum quality.