The paella in this restaurant is the real thing | Inquirer Lifestyle ❮ ❯ 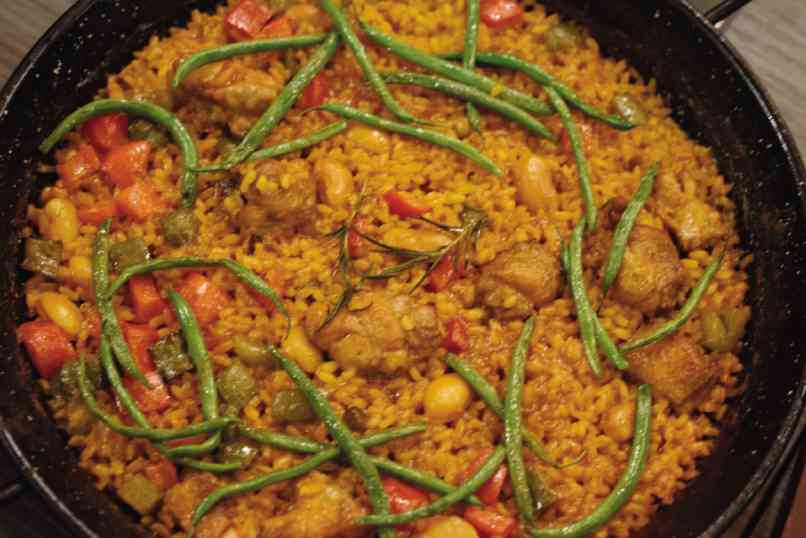 The paella in this restaurant is the real thing

There is a story, often abrogated but never entirely repealed, that Eskimos have over a hundred words for snow; simply because they have so much snow, and it informs every aspect of their lives, so they need different words to describe it.

By the same reasoning, people from Manila should have hundreds of words for traffic: the infuriatingly slow but crawling type, the stop-and-start kind, the hopeless kind where you might as well pitch camp for the night.

But the Philippine languages are nothing if not descriptive, even if the rules for using a particular word rather than another are impossible to describe. Rice has its own set of vocabulary, from the whole process of saing, to the individual portions of the ritual, such as the pag-inin.

And kanin, heaven forbid, must never be mistaken for bigas (uncooked rice), and the average stall at a commercial market will sell at least three or four varieties.

There was a time when the International Rice Research Institute (IRRI), based in Los Baños, Laguna, was at the forefront of research for new breeds of hybrid rice and the preservation of worthwhile strains of “heirloom” rice. I was excited when I heard that ArroZeria had partnered with IRRI, because we as consumers are literally tasting only a handful out of hundreds of interesting new varieties coming out; we have more rice that we can find names for.

I was expecting ArroZeria to be a showcase of local rice varieties, like a single malt bar but for rice. Or perhaps a restaurant that served rice dishes from around the world: Perhaps African jollof rice and Malaysian claypot rice rub shoulders on the menu. Or perhaps a selection of different rice types from around the world and the myriad ways in which they are steamed, boiled, simmered, etc.

But perhaps the owners decided that this would not have been a very marketable idea as a restaurant. After all, people go out to eat, not to have a lesson in taxonomy.

Yet we are remarkably sensitive to the quality of the rice we eat. Even while pinching pennies, the lower middle class will still spend a few extra pesos for a better grade of rice. If the rice is good, they say, then you don’t need as much of a main course to go with it.

Apart from the emphasis on the rice-based dishes (paella and other more soupy dishes such as caldoso and risotto), ArroZeria doesn’t stray very far from typical Spanish-restaurant fare. This is a bit disappointing for those, like me, who know the restaurant is run by the same people behind the dauntingly expensive Vask, and were hoping to get a bit of the Vask experience in a less formal atmosphere and at more down-market prices.

There is a bit of that in the appetizers, and most of the meat dishes are cooked with the aid of sous vide techniques, which in itself is not a guarantee of anything other than that the meat has a greater chance of having been rendered tender over the long cooking time.

We ordered a variety of appetizers, including an interesting and memorable basket of shrimp in black batter with a rather timid interpretation of mojo picon sauce. For the paella we were given the choice of al dente and thin or soft and wet. The waiter recommended we get the soft and wet.

We decided to get the al dente and thin instead, and were glad we did. The paella is the real thing, and though I haven’t done a comprehensive survey of paella around the city, this ranks among the best I have had, here or elsewhere: properly burnt crust where the rice meets the pan, and chewy rice full of flavor, a great wide circle of it, almost like a pizza made out of rice.

I haven’t tried their soft and wet, but that more or less describes most paellas you get in the city: mushy stodge ladled into a paella pan and baked perfunctorily.

At this point we were happy to move on to our main dish, a rib-eye chuleton. This was something of a downer after the high note of the paella. Among other things, the waiter seemed

reluctant to accept our insistence that we wanted the meat rare and suggested medium-rare.

We insisted on rare; it came medium-rare anyway. It was also a medium rare that was tough, bland and tasteless, and managed to lodge various bits and bobs in my teeth. I couldn’t think of any reason for the steak to be bad apart from the meat being substandard in the first place, which is disproportionate to its price at P495 per 100 grams.

As a point of comparison, the truly excellent steak at Stockton Place, which I keep going back to, is P490 per 100 g, and veined with buttery marbling and a deep, mellow flavor.

All said, ArroZeria is a bit of a curate’s egg; I’m not sure I would deliberately make my way there for anything else, but I would stop by there for the paella, which is worth a detour.

But to get the Vask experience, it seems that I’ll really have to break open the piggy bank and pay up for Vask prices.