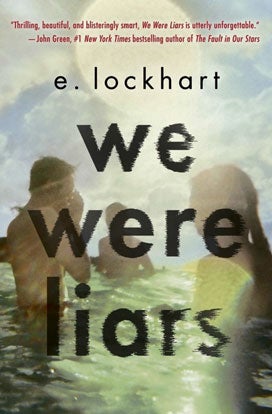 The truth about E. Lockhart

Author E. Lockhart’s “We Were Liars” is perhaps one of the most intriguing books that invaded the YA world. Despite its juicy secrets and shocking twists—the type that you need to dissect word by word with a group of friends—you’d be hard-pressed to find spoilers online when it first came out.

Fans of the book were very careful not to reveal anything, and E—which is what her dad nicknamed her, short for Emily—is grateful for it. “They were really protective of the ending, and I appreciated that,” she said.

Last week Emily flew to Manila courtesy of National Book Store (NBS) to meet her Filipino fans. She got tips and pointers from her writer friends (Jenny Han and Gayle Forman) who had already done the “rock-star book-signing tour” in Manila and Cebu.

“They (Jenny and Gayle) had an amazing time here, and they told me that NBS readers are incredibly enthusiastic and ardent readers and that I have to be prepared for very long signing lines,” she said with a laugh.

Apart from meeting her Filipino fans, whom she had been connecting with for a long time on Twitter, the Brooklyn-based writer is grateful for Manila’s sunny climate. “I’m so happy to be out of the weather in New York!” she quipped.

Avid book-lovers know that when it comes to hooking up online with authors, Twitter is the place to be. We asked Emily why so.

“Two reasons,” she said. “One is that I get a lot of e-mail and messages in other places, but the response expected is long and I do not have time to give readers long responses. I wouldn’t be able to write books, but on Twitter the response can just be thank you or a smiley face; and even the longest response is only 140 characters so I have the time to be generous when people tweet me. I can afford to be present there without losing too much writing time and be just as sincere.”

Emily spends about four or five hours of every weekday morning writing, and devotes the rest of the day to business matters, social media management included. Unlike some authors, she doesn’t view social media as a necessary evil, but something she truly enjoys doing.

“It’s effective if the author really likes it and can find creative ways to engage on social media. I like Twitter so I’m good at it. There are some huge authors who don’t do it at all; Suzanne Collins doesn’t do it—not one bit—but it isn’t hurting her. It’s useful if you can have a good time with it,” she added.

One of Emily’s most memorable characters is Frankie Landau-Banks. In her award-winning book “The Disreputable History of Frankie Landau-Banks,” the lead character is a teenager in prep school who questions the academy’s patriarchal setup and shakes things up to show everyone—and herself—that women are just as good (if not better) than men.

Those who love wordplay enjoyed Frankie’s “invention” of the “neglected positive”—words with prefixes whose meaning becomes the opposite when the prefix is dropped (e.g. impulsive is rash, pulsive is careful). Emily credits her grandfather for the neglected positive inspiration.

“It’s something that my grandfather used to talk about at the dinner table, she recalled. “He always loved coming up with neglected positives, and he attributed it to T.S. Eliot originally, I don’t know if that’s true. For the novel, I researched them,messed around in the dictionary, made some up, and experimented until I found some that were entertaining that I could use elsewhere in the book aside from just in the part where they get discussed.”

Emily’s favorite neglected positive, which best describes her, too, is “gruntled” (from disgruntled): “It just means you’re pleased with how things are going.”

She designed and printed neglected positives on totes and pouches and sells them on her Zazzle page.

While she has been firm that there won’t be a Frankie-related sequel, she has some ideas on what the teenager (now probably in her 20s) would be doing now.

“I really like to write endings where there are a number of possibilities for the reader to imagine,” said Emily. “I don’t think it’s as much fun when everything is perfectly wrapped up. In the novel, it says Frankie could become the head of a multinational corporation or a criminal mastermind. She’s a complicated character with many strengths but also a few fatal flaws. What is she doing in her 20s? She’s probably in graduate school somewhere.”

Those who started reading “Frankie” to “The Boyfriend List” series know how huge a departure “We Were Liars” is, with its heavy themes and pervasive darkness; the book was a way for Emily to challenge herself.

“I wanted to write something closer to a thriller than I had written before, partly because I like reading them, and I wanted to stretch myself and see if I could make a different kind of book than I had made previously.

I got the idea originally to write about a King Lear-figure patriarch, and as for the setting of the private island, I had always been curious about those islands because I had never been to one.”

While the film rights to “Liars” were recently acquired by Imperative Entertainment, Emily doesn’t see herself becoming a screenwriter anytime soon.

“There’s a screenplay, but I haven’t seen it. It seems like if it happens, it will be a grand adventure, but I’ve never written for film or television because I’m not really a very collaborative artist—I like to have the final say. In film you don’t get to have the final say, so I’ll just sit back and relax and try not to have any control,” she said.

Though “Liars” is markedly different from Emily’s previous works, one recurring theme that connects her books is privilege—her characters in close contact with wealthy people and their lifestyle.

“I grew up in a single-parent household, middle class, and had gone to a private school and college on scholarship,” she recounted. “My mother and I lived communally… in a house with around 15 other grownups and a couple of kids. The high school and college that I went to had this world of very entitled, very old money, largely Caucasian privileged community. Some of those people were incredibly charming and delightful, and some of that charm came from their security in their social positions.

The social hierarchy and the unspoken codes of behavior interested me, and I think I was always navigating my relationship around that upper social class throughout my formative years.”

Emily said her next book will be similar to “Liars” in its mystery aspect. “It has a little bit of murder in it, and that’s all I’m allowed to say,” she noted.

As for its release date, “depends on when I finish it!” she said with a laugh.

Those who had their books signed last weekend had the option to choose between two rubber stamps with mottos which they could wear on their hands, just like the characters in “Liars.”

Emily always asks readers to choose between the kindness (“Be a little kinder than you have to”) or bravery (“Do not accept an evil you can change”) motto, and it fascinates her to see which one they’d choose.

Which one would she pick? “Kindness. Most of the time,” she said.

E. Lockhart’s books are available at National Book Store or as ebooks at the Kobo Store. Follow @nbsalert on Twitter and Instagram for updates. Shop online at www.nationalbookstore.com.