I cut a deal with Francesco: If I made it to Eremo, I was leaving my cancer there | Inquirer Lifestyle ❮ ❯ 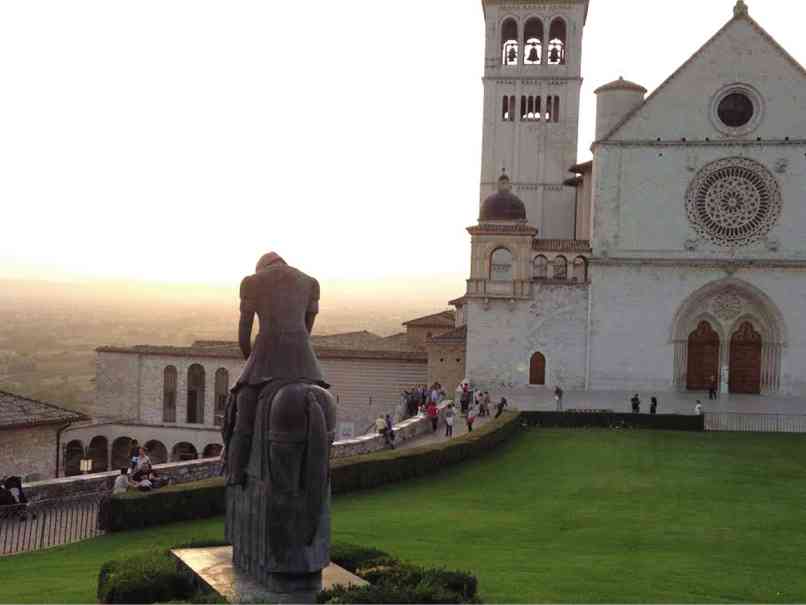 WITH THE STATUE of a bowed Francis in the foreground, the basilica sits in the Umbrian sunset.

I cut a deal with Francesco: If I made it to Eremo, I was leaving my cancer there

Upon first sight, the town of Assisi, sitting on a hill on the slopes of Mt. Subasio in Umbria, Italy, looks like it was caught in a time warp.

The contrast is even more dramatic when one arrives by train at the station in the flat, more modern area beneath the city; a bus picks up passengers every half hour to take them on the 20-minute drive, 400 meters up, to one of the holiest—and, in my opinion, most beautiful—places on earth.

Beautiful it certainly is, a town of Roman ruins and cobbled medieval streets, surrounded by olive groves and rolling plains.

The streets are so narrow, there’s no traffic, although a few cars still wind their way through. Just as well, because the best way to see Assisi is on foot, in no hurry, and with a working knowledge of the man whose personality can be felt in every corner of this Unesco World Heritage Site.

I’ve been a devotee of St. Francis since we began singing his prayer in elementary school. “Lord, make me an instrument of thy peace,” he asked. “Where there is hatred, let me sow love.”

It was just a pretty song then; today, after life has happened and the sheer faith behind such a prayer has been revealed, Francis has become even more admirable.

Most important, Francis is now widely considered the patron saint of animals and nature, and I have prayed to him for every one of my dogs.

I said a novena to him when my Labrador, Banana, was sick; I named my asPin, Kikay, after him, because I’m positive he saved her and led her to my door. So, on a thanksgiving pilgrimage to Italy last year, I knew I had to pay my respects.

Francis of Assisi, born Giovanni di Pietro di Bernardone in 1182 (but affectionately nicknamed Francesco by his French mother, Pica), was the son of a rich textile merchant; the family house, with its now decorated door, can still be visited in the middle of town.

As a young man, Francesco the spoiled rich kid was in perpetual search of adventure, even joining the army in search of direction in life. On one campaign, however, he was incarcerated and fell ill, during which he had a vision to return home.

He came back a changed man, spending days in solitude and prayer and, in one famous incident, even embracing a leper.

One day, Francis was praying before the crucifix in the chapel of San Damiano when the image of Christ spoke to him: “Go and build my house, which is falling into ruin.”

He would go on to establish the Franciscan order and travel far and wide, spreading the gospel of peace and poverty.

Accounts even had him preaching to birds, and making peace between a wolf and the townspeople.

Two years after receiving the stigmata, the wounds of Christ, he died in Assisi in 1226.

The Basilica of St. Francis dominates the town’s skyline, visible even from afar. Already venerated even before his death, Francis took the fast track to sainthood; work on the basilica began in 1228, the same year he was canonized by Pope Gregory IX, a mere two years after his death.

Approaching the basilica, one comes upon a large lawn, with a moving statue by artist Norberto Proietti of a despondent Francis returning from war. A plaque in front reads, “Lord, What Do You Want Me To Do?” and poetically captures the surrender that would start him on the road to becoming one of the greatest Catholic saints.

To the left of the lawn, stairs lead to the lower basilica, but the low wall overlooking the Plaza of St. Francis is the perfect place to take in the quiet and watch the sunset on a late summer afternoon.

The dazzling white brick upper basilica, with its colorful nave, and the lower one, with its doors beautifully decorated with rose windows, are practically blanketed with precious, stunning frescoes by Cimabue, Giotto and other Italian artists of the period, depicting episodes in the saint’s colorful life.

Ground Zero beneath all this grandeur, however, is the crypt where the remains of Francis lay.

As the story goes, Francis’ followers hid his remains after his death to prevent the dispersal of his relics across Europe. When the remains were found in 1818 and confirmed to be those of the saint, a crypt was built under the lower basilica.

The tomb is an imposing stone column, surrounded by iron ties, and vibrating with an almost overwhelming energy. Pilgrims walk in silent single file around it; some kneel and insert little notes, pictures of loved ones and mementos in the hollow behind the iron ties.

As I cried, moved by the encounter, I realized I had nothing of much significance to offer—so I wiped the tears off my face, and slipped my handkerchief behind the grills. I would leave a bigger “offering” for Francis later on in my journey.

Francis also founded the Order of the Poor Clares with his lifelong follower and friend, Chiara Offreduccio, also known as St. Clare of Assisi. (Some historians imply that Clare, the “Sister Moon” to Francis’ “Brother Sun,” had a thing going. Whether they did or not, the fact that they gave up everything to dedicate their lives to God clearly reveals their final choice.)

Her own church, the Basilica di Santa Chiara, is fronted by a wide piazza with a fountain and a breathtaking view of the olive groves.

Here, too, St. Clare’s remains are entombed, but it is a testament to her role as a diligent Franciscan disciple that there are more relics of Francis here than in his own church. The original San Damiano cross that spoke to Francis can be seen here, along with locks of Clare’s hair, and a most moving item—one of Francis’ tattered old stockings, with dried blood from the stigmata wound on his foot.

You’ll have to take the bus down to the flat area of Assisi, near the train station, to visit the Basilica de Santa Maria degli

Angeli (Saint Mary of the Angels). Here, like a cute little church within a big, majestic one, sits the Porziuncula (“little portion”), a 9th-century chapel where Francis first began his vocation.

A few meters away is the Capella del Transito, the tiny room that used to be the Franciscans’ clinic, and where Francis breathed his last on Oct. 3, 1226.

Outside, even more wonders: a rose garden, where a wooded area inhabited by the wandering Franciscans used to be. During a moment of intense prayer, Francis threw himself into some thorny rose bushes as a form of physical penance. Instead, the story goes, the roses lost their thorns, and the blessed flowers, Rosa canina assisiensis, grow in the garden to this day.

Lest you think this was only a spiritual journey, let me assure you that such is impossible when you’re in Italy. I turned 50, alone, in Assisi, and it was one of the best celebrations of my life. I discovered Sagrantino, the robust red wine made from the Umbrian grape that is a pride of the region.

They also make this into a deadly marmalade that goes divinely with the local caciotta cheese, made from three kinds of milk (ewe, goat and cow). For my birthday dinner, I had all these treats, along with a bowl of strangozzi (Umbrian wheat pasta) in black truffle sauce—how’s that for a happy birthday?

Kuya Francesco was saving the best for last, however. After I had checked into my wonderful little mom-and-pop hotel, Trattoria Pallotta, the owner, Stefano, asked me if I was up to climbing a mountain. I had heard about this one, Mt. Subasio, 1,290 m above sea level, where the Eremo delle Carceri could be found.

Francis put up a small oratory here in 1205, amid several mountainside caves where the Franciscans would retreat to pray. Eventually, a beautiful hermitage was built.

No transportation heads to the Eremo, unless you hire a car; it’s a two-hour uphill climb, Stefano said.

I had just completed treatment for cancer five months before, so I cut a deal with Francesco: If I made it to the Eremo, I was leaving my cancer there.

I took only my rosary and a water jug and set out in the morning, taking slow but steady steps as the Umbrian countryside unfolded before me. I made a few stops, to take in the view, catch my breath, say hello to a few rare tourists with hiking sticks and backpacks, listen to the sound of the breeze in the blessed silence, and look at a pair of battered sandals a pilgrim had enshrined along the way.

I made it in less than two hours.

At the Eremo, I saw the oak tree where the birds were said to have perched to listen to Francis’ sermon. I saw the caves where the Franciscans would hide in meditation, and the little chapel they hewed from the side of the mountain.

And here was my most unforgettable moment—I sat in grateful, unbelieving silence for over an hour, in the tiny cave labeled “grotto e giaciglio de S Francesco”: the cave and bed of St. Francis, where he would hide from the world to be with his God.

It was mid-afternoon by the time I was ready to leave. Standing on the terrace of the hermitage, I whispered, “Lord, make me an instrument of thy peace,” and threw my illness—along with all the pain and blessings that came with it—to the winds.

It was my “offering” to Francesco, and I like to think he welcomed it.