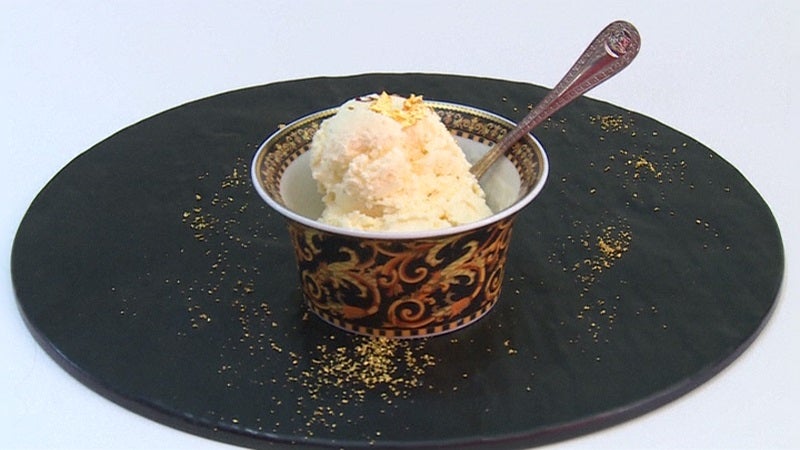 At over $800 US dollars, this luxury desert is thought to be the most expensive ice cream in the world.

Made with Italian truffles, ambrosial Iranian saffron and edible 23-carat gold, the ‘Black Diamond’ – as it’s known – is also presented in this Versace bone china bowl.

It’s being served up at Scoopi Cafe in Dubai, an ice cream parlour just metres from the city’s prestigious Burj Al Arab Hotel.

Its creator, Indian businessman Zubin Doshi, says the $817 USD price tag is about right when you consider its unusual mix of ingredients.

“So that’s what I wanted to do something expensive, but worth it.”

Like all varieties of ice cream served at Scoopi, the ‘Black Diamond’ is made from scratch.

They use liquid nitrogen to turn the milk and ingredients into ice cream.

The luxury items – saffron and gold – are added as decoration.

Those that purchase the dish get to keep the spoon and Versace bowl.

But who would pay around $817 USD for such a creation?

“Anyone who feels they’re special, anyone who thinks that today’s a special day,” says Doshi.

“We’ve sold two, both of them were Arabs. One was a local Royal from the Royal family of Dubai and the second one was – I think so – from Saudi Arabia.”

Today, there are no customers indulging in a ‘Black Diamond’, but some say they would splash out if it was a special occasion.

“It’s for great occasions that we celebrate. I’m sure the taste is different, it’s a unique recipe.” says customer, Mohammed Alfalasi.

Others say that’s a price too high to swallow.

“Well, much as I love ice cream I really don’t think I would fork out nearly 3,000 Dirhams ($817 USD) for an ice cream,” says customer, Amanda Jewell.

“Because I think you can make it with really, cheap, nice ingredients anyway, but I’m sure it would be delicious.”

“I think it’s a once in a lifetime chance to buy something quite special,” says customer, Tony Beadle.

“You’re probably spending a lot of money for the ingredients that are added to it, saffron and the expensive bowl – it goes with a rare bowl and spoon – but I think the ingredients themselves probably wouldn’t actually be that expensive. It’s quite a lot to spend for one ice cream.”

They represent a bargain in comparison at around five US dollars each.