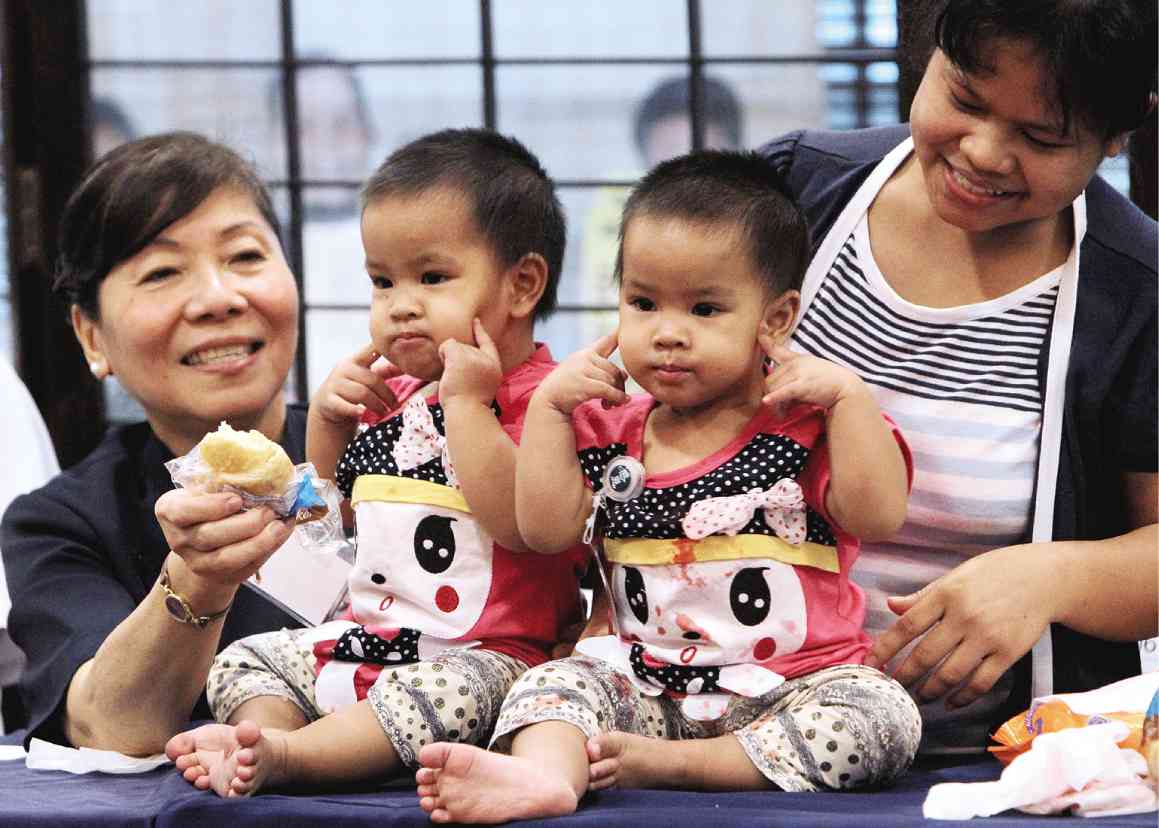 SEPARATE LIVES Separated conjoined twins Jennylyn and Jerrylyn de Guzman are presented to the media during a press conference at the Tzu Chi Foundation in Quezon City. The twins underwent surgery in Taiwan with the help of the foundation. With them are their mother Ludy (right) and Tzu Chi volunteer Conchita Tan. RICHARD A. REYES

“It was like magic,” Ludy de Guzman described the procedure her 16-month-old daughters Jerrylyn and Jennylyn went through to become separate individuals.

“I still can’t believe they’re no longer attached to each other,” the 24-year-old mother said.

The girls were born on Dec. 8, 2013, sharing the same liver and sternum or breastbone.

But with the help of Tzu Chi Foundation, the conjoined twins were successfully separated by a 30-member team of doctors and nurses on March 13 at Buddhist Compassion Relief Tzu Chi General Hospital in Hualien, Taiwan.

“Now, the children can sit and play and are learning to stand on their own,” De Guzman said.

Jerrylyn and Jennylyn were playful and smiled before the cameras when they were presented to journalists at the Tzu Chi Foundation office in Quezon City on Friday.

De Guzman said that before the eight-hour surgery, the girls had to be carried all the time that made her give up her job as a fish vendor in Bautista, Pangasinan province.

Her husband, Jayson, a farmer, has an irregular income of P100 to P200, she said, so it was impossible for them to afford the operation.

They also have a 5-year-old daughter.

The twins were the third conjoined pair from the Philippines helped by Tzu Chi Foundation.

The first pair was Lea and Rachel Awel, who underwent surgery in 2003, while Rose Carmel and Rose Carmelette Molit, now 6 years old, went through the separation procedure in 2010.

The Awel twins’ parents, Andy and Marieta, are both working for the foundation and each is donating P100 from their earnings to the group’s charity program.

“We donate as a form of gratitude for the opportunity given to our daughters to live separate and normal lives,” Marieta said.

Lea said she and her sister might have been bullied by other kids if they remained conjoined.

“Those who are not normal are usually bullied,” said Lea, who wants to be a teacher serving in impoverished communities.

Her twin Rachel wants to be a doctor to help people who cannot afford medical services.

Their father Andy attributed their selfless ambitions to the Tzu Chi culture they grew up in.

“I have changed a lot since I joined the community. I dropped my vices like drinking and smoking so I could focus on my family,” he said.

“Like Andy, the people we helped in the country work hard for their families … These people changed,” Li said. “[The] Filipinos’ sense of gratitude is very strong,” he added.

He said Philippine communities helped by the foundation were always willing to lend a hand or donate when needed. He cited volunteers in Tatalon village, Quezon City, who chipped in to raise P3 million needed for the De Guzman twins’ surgery.